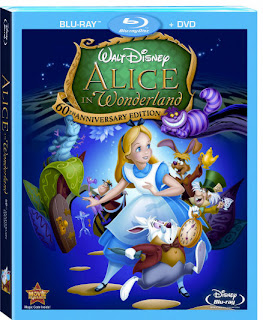 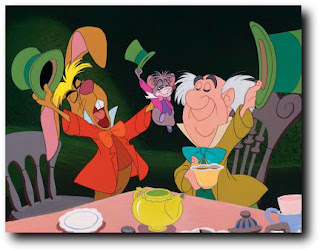 Often maligned, the Blu-ray presentation of Alice in Wonderland provides a reason to revisit this animated classic from Walt Disney. It is fairly well known that Disney spent over 13 years trying to develop this project and started it no less than five times.

I won’t spend time critiquing the film; either you already love it or hate it. The high-definition presentation is eye-popping and shows off the skills of the animators and artists. Alice was created at the peak the Nine Old Men’s animation prowess and it is evident. Besides the amazing visuals, the other major reason to invest in the Blu-ray edition is the extras, which provide an interesting new twist. 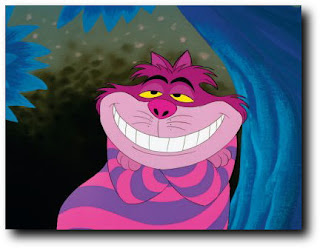 I really enjoyed the documentary about the film that is presented in Through the Keyhole: A Companion’s Guide to Wonderland. Instead of a commentary track that plays over the film’s audio or a talking-heads only documentary, Disney has created a new way to view commentary/documentary. The full feature film is presented on one side of the screen while historical photos and the ubiquitous talking heads take up the rest of the screen real estate. In this case, we are introduced to Disney historians, Caroll experts and Disney artists. They tell the story of Lewis Caroll mixed with Walt’s attempts to bring the film to fruition. It was great to see Brian Sibley, Charles Solomon and Paula Sigman (all noted Disney historians) provide on screen commentary and historical tidbits that offer keen insight and tie the film and book together.

Reflections on Alice (listed under Classic Features, even though it is new) is a shorter piece that looks at the animated film and the Disney Company. Disney historians are interviewed and provide commentary about the films, theme park attractions and merchandising. Noted animator and Disney Historian Stacia Martin joins blogger Matt Crandall (and others) to discuss how Alice has been part of the company since 1923. Matt runs Vintage Disney Alice in Wonderland.

Should you buy this?
If you love the film, yes. It is an astounding presentation on Blu-ray. Most animated features really shine on Blu-ray and Alice is no different. The Bonus Features are nice, especially the commentaries. I still wanted something more exciting as a feature, mainly to extend the life of the film, but it must be difficult for Disney to find new things. If you haven’t seen it in a while and don’t own it on Blu-ray, then this is a good choice. No one is really sure what the next format is going to be (hi-def streaming?), so this might be the last time you can own a copy of this film.
This Blu-ray disc was provided as a review copy from Walt Disney Studios Home Entertainment.

One thought on “Blu-ray Review: Alice In Wonderland”