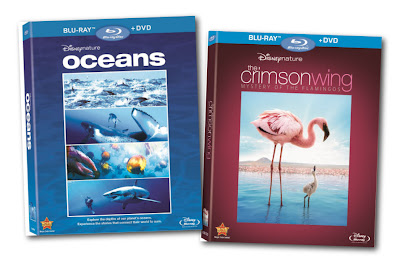 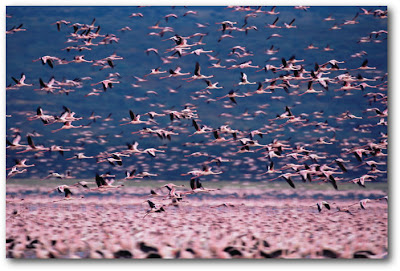 Crimson Wing and Oceans are the second and third releases from Disneynature, an independent label of Walt Disney Pictures. In the same vein as the original True-Life Adventures, the Disneynature films are the heir apparent to the original films. Whereas the True-Life Adventure documentaries were a monumental breakthrough in education and entertainment, the Disneynature films are a perfect meld of artistry and ecology. No less educational, but far more artistic in presentation and scope. The spectacle that is life is rivaled only by the presentation of the filmmakers.

Of the two films, Crimson Wing

is the more traditional nature documentary. We follow the life cycle of one crimson-winged flamingo, out of as million, as the flock journeys through the Rift Valley of Africa. The images are stunning, if not mesmerizing. The pink of the flamingos sets itself off against of the blue of the lake, which merges seamlessly with the African sky. There are moments when you can’t tell if the flamingos are in the lake or the sky. 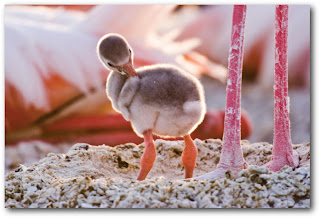 In looking at the two recent releases, Crimson Wing takes a far less abashed look at its subject. There were incidences with predators that made both myself and my eleven year-old son avert our eyes. As painful as it was to see the chicks fall to the predators, it was an opportunity to discuss life, our planet and how the world is truly intertwined. The music in Crimson Wing was composed by the Cinematic Orchestra and is as breathtaking as the visuals. 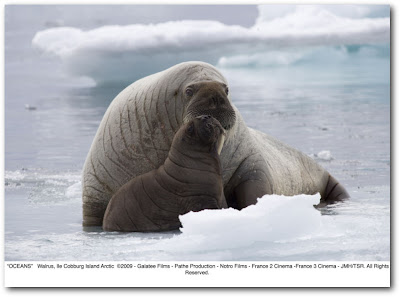 For Every Disc Purchased Now Through October 25th, Disneynature Will Make A Contribution To Help Protect Coral Reefs. 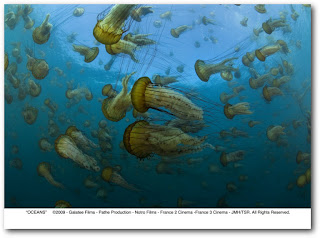 , by its nature, is more nebulous and offers a more cinematic experience. The filmmakers truly submerge the viewer into a hi-definition, liquid world. Oceans delves into all five oceans and the wildlife that spends its time on the surface and in the depths. The effect of watching the film on Blu-ray was one of being in the ocean with the filmmakers, riding along with the dolphins and crawling along the ocean floor. It was an amazing experience.

This film is more family-oriented and doesn’t offer the normal predator vs. prey scenes. There are a few underwater skirmishes, including a battle between thousands of crabs, but nothing that ever made us look the other way. Where this film shines is during the introduction of species that rarely get this level of attention. You will marvel at the scenes showcasing these strange and astounding creatures. What about one of the filmmakers swimming alongside a shark? Amazing.

The film pulls no punches when discussing man and our effect on the oceans of the world. Pollution, over-fishing and shrinking environments are all chalked up the the destructiveness of our nature. It isn’t heavy-handed, but it is presented in a straight-forward and compelling manner.

Both films are a worthy addition to your library and will offer hours of entertainment.

About “See OCEANS, Save Oceans”:

By purchasing a Disney Blu-ray Combo Pack or DVD of Disneynature OCEANS through October 25, viewers can help conserve our world’s oceans and the species that depend on them for survival. In honor of each Blu-ray and DVD purchased during that period, Disneynature, through the Disney Worldwide Conservation Fund, will help establish new marine protected areas in The Bahamas with The Nature Conservancy, one of the largest conservation organizations in the world. In The Bahamas, The Nature Conservancy and its local partners, including the Bahamian government, are establishing a new marine protected area along the west side of Andros Island. Currently, new marine-protected area boundaries are being defined that will expand from 300,000 acres to more than 1 million acres. These areas will contain miles of vital coral reefs that provide natural habitat, nurseries and feeding grounds for hundreds of marine species. For more details on Disney’s collaboration with The Nature Conservancy, please visit: www.disney.com/oceans.

One thought on “Disneynature Oceans and Crimson Wing”