You never know when you are going to run into a little Disney mystery. On twitter, ImagineeringDis posted the following photo and wondered where it was: 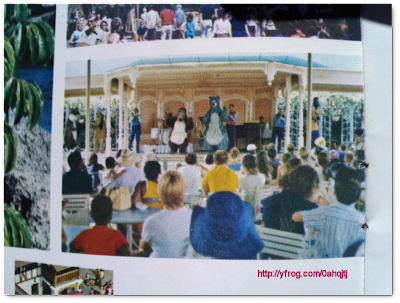 EPCOTPluto and ProgressCityUSA both chimed in with the response about it being the Fantasy Faire Stage in Fantasyland of the Magic Kingdom. EPCOTPluto also shared that it was in the 1977 Walt Disney World Pictorial Souvenir 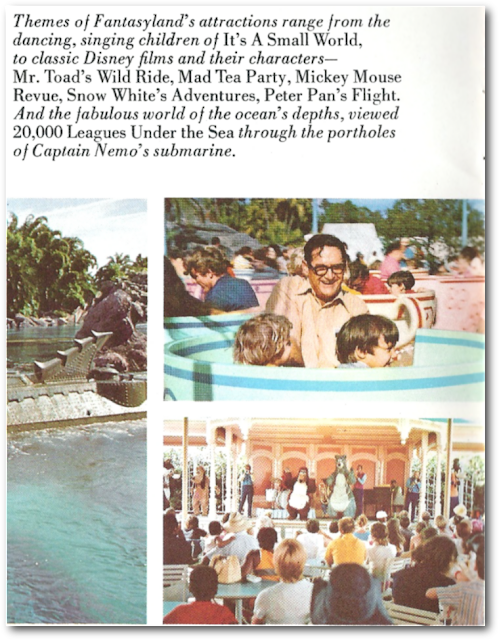 I left the text in the scan so that you could see that Disney made no mention of the stage in their official publications. 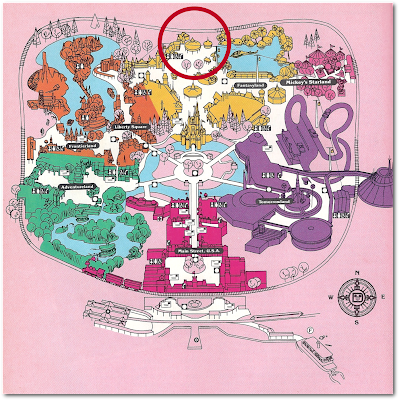 The Fantasy Faire stage was located in the northernmost part of Fantasyland where Ariel’s Grotto was before they began construction on the New Fantasyland. This map is from the 1990 Steve Birnbaum Brings You The Best of Walt Disney World

Guidebook. The 1990 edition makes no reference to the stage or the performances.

I went back to the 1988 edition and found this in the Birnbaum guide: 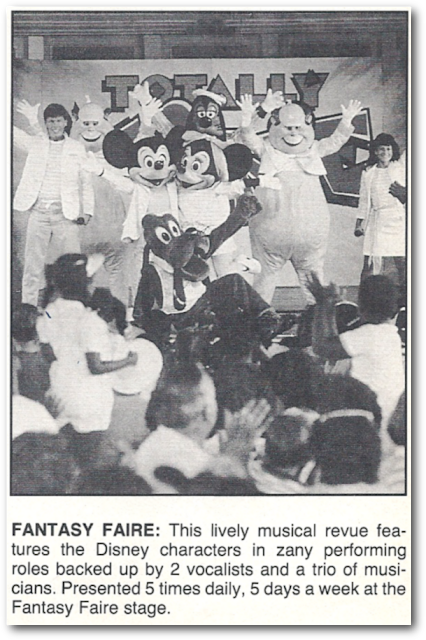 Fantasy Faire: This lively musical review features the Disney characters in zany performing roles backed up by 2 vocalists and a trio of musicians. Presented 5 times daily, 5 days a week at the Fantasy Faire Stage.

It is apparent from the background of the image that the show is Totally Minnie. I am still wondering why Tweedle Dee and Tweedle Dum are there…

I hit my trusty Disney A to Z

That is not a typo; Smith did not include the “E” at the end of Faire, but every other resource I consulted lists it with an e.

Researching early Walt Disney World (re:1970s) is very difficult unless a webmaster or blogger has an obsession with a certain area or location. Foxxfur at Passport to Dreams is the de facto resource for all things Village and Michael Crawford of Progress Citu, USA specializes in early EPCOT obsessions.

Widen Your World by Mike Lee is a fantastic resource for lost, forgotten and lone-gone Walt Disney World information. On his Magic Kingdom Index Page, he lists Fantasy Faire as being replaced by the Fantasyland Pavilion and then incorporated into Ariel’s Grotto. The stage existed from 1971-1996. It would have been renamed the Fantasyland Pavilion sometime after 1994. I do have a 1994 Magic Kingdom Park map that lists the Fantasy Faire Stage and an entertainment listing for May 1994. For most of the week in May, there were high school bands performing on the stage.

by Robert Sehlinger has some more info about the stage:

Fantasy Follies
When to go: At any scheduled performance time
Duration of Presentation: Varies as shows change, but usually about 20-23 minutes
Preshow Entertainment: None
Theater Capacity per Performance: Approximately 450 persons
Theater Capacity: NA
NOTE: Theis show runs according to a performance schedule posted in front of the Fantasy Faire Theater (i.e., performances are not continuos). Usually there is noproblem gaining admittance, even during the busier times of day.

With that being said, I present the following image that a friend let me borrow. This was taken during his 1985 trip to Walt Disney World. It was difficult to make out the illuminated words behind the characters. I sent the image to Foxxfur and she responded that it was the Fantasy Faire stage. My guess is that the words do say Fantasy Follies. 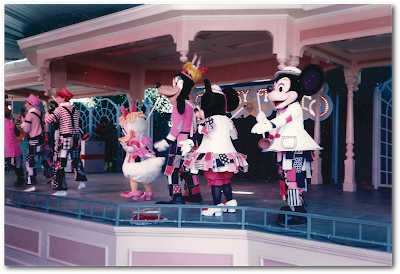 This would be an image of the Fantasy Follies!

You can see the Fantasy Faire in action in the embedded video at 2:13.
Don’t forget to stop by our site and leave some Disney Geek love!

3 thoughts on “The Fantasy Faire Stage: All the World’s A Stage and We are Merely …Curious?”