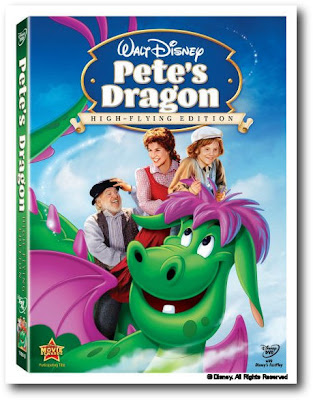 and Bedknobs and Broomsticks

; a Broadway-style musical with a mixture of animation and live-action. Pete’s Dragon never received the same approbations as Mary Poppins, but it retains a seminal charm that will engage all generations of viewers.

Pete’s Dragon is an uplifting musical adventure about a spunky young orphan that blends live action and stellar Disney animation. With his only friend Elliot, a tubby, 12-foot tall dragon who can make himself invisible, Pete (Sean Marshall) takes refuge from his abusive adoptive family in the seaside town of Passamaquoddy, Maine. After Elliot’s invisible antics wreak havoc with the residents and Pete gets the blame, Nora (Helen Reedy) is touched by the youngster’s plight and takes him to live with her and her tippling father Lampie (Mickey Rooney) in the Passamaquoddy Point lighthouse. Lampie’s tipsy tales of the boy and his dragon amuse the disbelieving townsfolk, until the local quack, Dr. Terminus, discovers that Elliot is real and hatches a scheme to capture the dragon. An exciting and inspiring story with unforgettable music, including the Academy Award nominated “Candle on the Water,” “There’s Room for Everyone” and “Brazzle Dazzle Day,” Pete’s Dragon High Flying Edition will be a perennial favorite with children and parents. 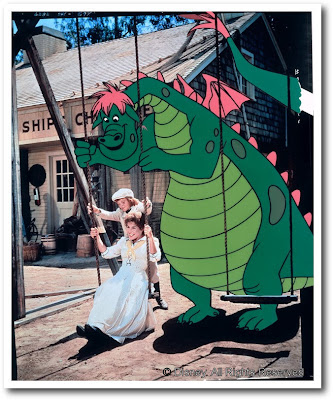 I remember watching the video many years ago and I was looking forward to sharing the sentimental story with my kids. When I watched the DVD with my family, I was glad to see them react positively to the characters and the songs. Our favorite parts always included Doc Terminus and Hoagy as they tried to swindle the inhabitants of Passamaquoddy.

Pete’s Dragon is a fun, family movie that everyone will enjoy. One of the more entertaining dance sequences takes place in the local tavern where Lampie tries to warn everyone with the song I Saw a Dragon. His daughter comes in to take him home and ends up joining the song–the ending is a raucous segment where beer barrels end up popping and soaking the tavern in foam. I do wonder if Disney would include a segment like that today!
Of course, most parents will wonder if the song Brazzle Dazzle Day will be as memorable as A Spoonful of Sugar or The Happy Working Song when the kids are helping to clean their rooms!
Extras
By today’s standards, some people might be turned off by the mixture of animation and live-action. After watching the documentary, Brazzle Dazzle Effects: Disney’s Movie Magic, I was shocked by the effects team at Disney–they were able to recreate a New England fishing town on the Disney backlot in Burbank! There were times when I thought Pete was outside of Passamaquoddy and it was just clever use of matte paintings and animation. The documentary looks at the amazing techniques that Ub Iwerks was able to pioneer throughout his career that led to the mixture of live-action and animation. Every Disney enthusiast needs to watch this documentary.
Also included is the Donald Duck short Lighthouse Keeping. Need I say more than Donald, a crafty seagull and an easily extinguishable light?

The following film clip is from the Disney Family Album section. Ken Anderson, one of Disney’s Nine Old Men, designed Eliot and received credit as animation art director. Don Bluth did a majority of the animating.