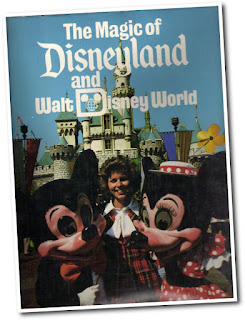 The Magic of Disneyland and Walt Disney World by Valerie Childs. 1979, 96 pages.

Valerie Childs wrote this picture-laden look at Disneyland and Walt Disney World in 1979. Although it was not an official publication, it was endorsed by Walt Disney Productions and WED Enterprises. She wrote another edition in 1982 (but dropped the Walt from Walt Disney World).

The real strength of this book is the photographs that appear on every page (except the introduction). The book is presented much like the souvenir guides to the theme parks; lots and lots of pictures. The first seven pages present a very generic version of the company history outlining the major events that led to the creation of Disneyland and Walt Disney World. The rest of the book is comprised of photographs that alternate between Disneyland and Walt Disney World. If nothing else, it will test your historical knowledge of the parks.
I liken the photographs to a time capsule from the late 1970s; not to mention the fashions, but the fact that many of the attractions and features have changed over the past 30 years. A few of the photographs would seem to be stock photos, but many are taken from such unique vantage points, that you might wonder where the photographer was standing. The photographs are dated and the work does have the look of a book from the 1970s. Many of the pictures are clear, but some have that grainy, yellow look to them. I think the images speak for themselves. 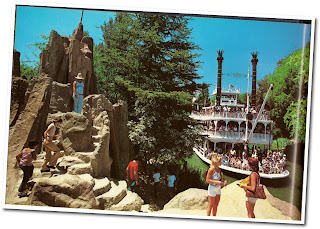 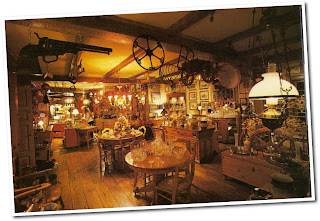 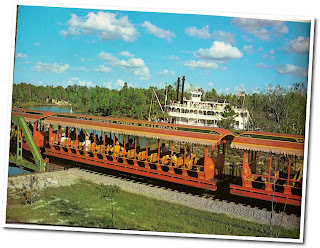 The Walt Disney World Railroad
A majority of the pictures feature guests and characters, almost like your own vacation scrapbook. You do get some interesting glimpses of carpets, finishes and areas with much less vegetation than today. It also seems that Disney was not as scrupulous in the images that were allowed to be presented. This book is a great resource for us park detectives that spend time analyzing each photo for various details. 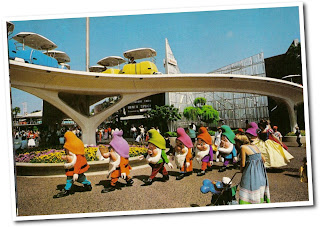 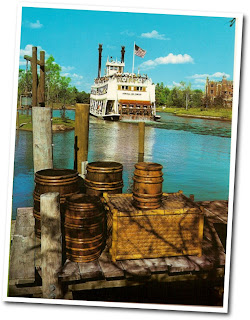 The Admiral Joe Fowler (Magic Kingdom)
Bottom Line: There is nothing revolutionary about this title but it is a fun trip down memory lane. If you were never able to visit Disneyland or Walt Disney World in the 1970s, then you will love the visions of the parks from that time period. I would recommend this book if you can find a copy for a relatively cheap price or in the bargain bin. It is a must-have for the enthusiasts interested in what the parks looked like in the 1970s.

7 thoughts on “Book Review: The Magic of Disneyland and Walt Disney World”