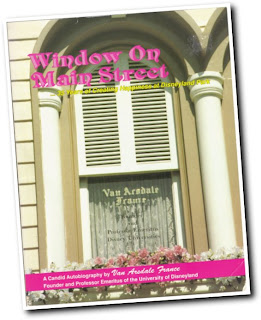 Van Arsdale France, Disney Legend and member of the pre-opening cast at Disneyland, has a window on Main Street at Disneyland (hence the book title). The window was originally installed above the former Tobacco Shop. Currently, the window is above an empty spot between the Magic Shop and Great American Pastimes. Van was at the opening of Disneyland, Walt Disney World and Tokyo Disneyland. He was responsible for the overall development of the training programs and is considered the Founder and Professor Emeritus of Disney University. As recounted in the book, Van hired Dick Nunis as a gofer back in 1955. Years later, Dick would be the president of Disneyland and Walt Disney World. Van returned to the company as Dick’s staff assistant (professional term of gofer). Lesson learned? Always be nice to your staff–you never know when they might be your boss! Van passed away in 1999 in California.

Published in 1991, Van recounts his long and storied career with Disney. The work is full of anecdotes that are told chronologically. From meeting Walt the first time to the introduction of Eisner and Wells. The book is presented as a biography but is really more of a collection of anecdotes. As Van states, he had tried to publish this book in the 1970’s, only to find himself heavily involved in the opening of Walt Disney World and Tokyo Disneyland.He revisited the idea in 1985. With Dick Nunis’ approval and Disneyland’s 35th Anniversary approaching, Van dusted off and “…reworked that old, dust-covered book.” (p. 6) 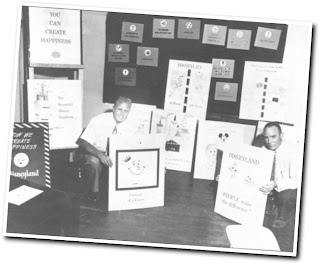 Van looks mainly at his story at Disneyland. In the beginning, he was hired to create Disneyland’s first employee training session–the very first session was attended by Roy Disney, the Vice President of Bank of America and major executives of Disneyland sponsors. Talk about a tough crowd! Roy approved and thus launched the beginnings of Disney training.

In that first session, Van and Dick created the training, the manual and all visual aids on a shoestring budget. The theme was We’ll Create Happiness. The rest of the manual includes the following areas:

From there, Van recounts the major points in Disneyland’s history and his opinion and thoughts on those events. For a two-year period, Van left Disney and worked with C.V. Wood on the Pleasure Island Park in Massachusetts and the Freedomland Park in New York. After the hiatus, Van was rehired by Dick at Disneyland. From there, the Disneyland University was officially begun. It would see many changes throughout the years, but the basic philosophy would remain the same. My favorite parts of the book were the stories about Roy; you get the feeling that Roy truly loved Walt and did everything in his power to make all of Walt’s dreams successful. Van never saw himself on the creative side and always felt an affinity for Roy and Dick Nunis. It is obvious that these two men were thought highly by Van.

The book is divided into major chronological sections with small stories presented back-to-back. It is a quick and easy read. At various points, you will find yourself laughing out loud. For me, I found myself wishing to be a part of the early years of Disneyland. Van finishes with a look at the changes and excitement brought by Eisner and Wells.

I would like to thank Van–posthumously. If he hadn’t decided to keep his “diary,” there would be a lot of lost stories. And this book is a great collection of stories.

Bottom Line: This book is a fun and a great look back at one man’s long career with Disney but it isn’t for everyone. I would recommend this work for the Disney enthusiast that wants to learn more about what it was like working in the organization and seeing how it grew. The anecdotes are charming and you do get a good sense of how Disney grew and evolved over the years.