I really enjoyed David’s books. He does take a different perspective from most of the pollyanna Disney titles that we read here at Imaginerding. Both books are filled with behind-the-scenes tales and stories from Disneyland, USA; some of the stories are dark, many are hilarious and quite a few will make you wonder how the guests survive on a daily basis (re: guest stupidity). You will need to take off your rose-colored Disney Mouse Ears when you read these books. 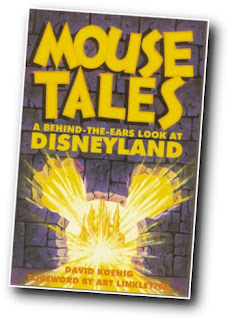 My intent is not to discourage you from David’s work, by any means. They are important in the catalog of Disney-related titles that are currently available. David chronicles life working at Disneyland–there aren’t many books that do this and none that do it this well or with such depth. He writes very well and the books are structured so that the stories flow and you want to continue reading. David is a former journalist and his style is reminiscent of a journalistic/investigative piece.

David does take us behind-the-scenes and he shares a lot of stories that cast members have relayed to him. In the first book he didn’t offer anonymity to his sources. During his research for the second title, he realized that he could pass along stories that were much richer if he allowed his sources some freedom to share at will. It does pay off. At points you will laugh out loud and at other times you will shake your head in wonder and amazement

A majority of both books talk about what it is like to work at the Happiest Place on Earth. Cast member stories, firings and dealing with the guests are some of the better parts. David obviously knows a lot of people at all echelons of the Disney Company. For those of us not cognizant during the 1970’s and early 1980’s, there are lot of events that may surprise you. Did you know that there was a major strike at Disneyland? 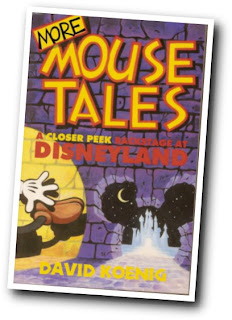 David also tells-all about other Disneyland staples. Thought the Grad Nights were wholesome times? Which ride do you think saw the most action? Did you know one of the most dangerous places at Disneyland was the parking lot? How about the Jungle Cruise Skipper revolt?

They don’t need to be read in order, but More Mouse Tales does build on a few of the stories in Mouse Tales. David added a special feature to More Mouse Tales that really added a lot of personality to the book: Guest Pains, where Tales of tourists gone on mental vacations appear in boxes throughout the book. Basically, David has peppered the book with call-out boxes full of stupid guests questions, crazy situations and quite a few “huh?” moments.

You will enjoy both of these works. As I mentioned earlier, David does go deeply behind-the-scenes and some of the stories may cause some dismay. Working at Disneyland, like any other job, does have its highs and lows. Nonetheless, they are both very important works in the Disney literature.

My final thoughts? They are worthwhile reads and solid additions to your Disney Geek library. Some of the stories and histories that are recounted are not available anywhere else.

You can read about the Imaginerds meeting David Koenig.

Visit David over at MousePlanet!