Richard runs Photos From the Park, a great Disney blog where he showcases the pictures that he has taken at Disneyland and Walt Disney World. His intent is to whet our appetites between trips and to help curb our homesickness for the Disney parks. I’ve spent a lot of time checking out his pictures over the past months and he has focused on a different angle than most vacation-type photos.

In addition to posting pictures, he also sprinkles facts and tidbits about the attractions, buildings and shows. So, not only do you get a great picture from the parks, but you learn something as well!

This is our fourth Meet Our Neighbor post. The earlier ones were:

Take it away, Richard!

My earliest memory is a book of Walt Disney stories given to me when I was six years old. ‘Walt Disney’s Story Land’ opened to me a realm of stories and images still seared in my mind; the family friends who gave me the book also had us over for it a Kodachrome slide show (oh, the 70’s!) and it was the first time I had seen photos from the parks. I was instantly smitten with all things related to Disney parks.

Wow; that’s a hard choice to make but it has to be Walt Disney’s Enchanted Tiki Room in . I know, I know: the Tiki birds? Well, for me, this attraction brings together some of my favorite Disney icons: this was one of Walt’s beloved ideas; the brothers are responsible for the music; Adventureland is my favorite land; and, the voice talent be

hind the macaws in the show and the gods and goddesses outside in the pre-show is an absolute treat. It broke my heart when WDW decided to re-imagine the attraction in the late 1990’s but it’s good to know the original still lives in . On a side note, I love the fact Walt himself owned this attraction whereas everything else in was owned by the Walt Disney Company. Closer to home at WDW the Hollywood Hotel Tower of Terror at Disney-MGM Studios is my favorite overall conceptual ride: everything about that ride’s story and theme is fantastic!

My very favorite Disney movie is the one that made Walt Disney World possible: Mary Poppins. In addition to garnering the awards and the box office receipts necessary to launch the project, it also brought together many of the story telling elements required to expand what the post DL parks have become today. As far as non-Disney movies go, it would be a toss-up between The Blues Brothers, The Good, The Bad, and the Ugly, and Lost in Translation.

My favorite park is the at Walt Disney World. and Disneyland (not California Adventure!) are close seconds but it you gave me one last day to spend in a Disney park it would be spent in WDW’s , preferably in Adventureland. 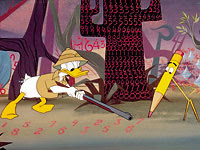 While I love many of the characters Disney singlehandedly personified such as Peter Pan, Pinocchio, the Cheshire Cat, Mr. Toad, and others, my favorite Disney character is Donald Duck. Mickey Mouse is the embodiment of Walt Disney but Donald is the everyday man, the one that most people can identify with. You’ll never see another character quite like Donald in that he’s the one who is free to express all sorts of emotions other characters do not. When Walt and the studios wanted to point out something common to all of us or create an ‘educational’ cartoon they did it with Donald. Donald in Mathmagic Land and the How to Have an Accident series are some of my favorites.

Hmmm; it’s a tie between ‘Baroque Hoedown’ from the Main Street Electrical Parade and ‘Step in Time’ from Mary Poppins.

There are two Disney greats that I’d love to spend a day looking through their eyes. The first is the Disney Legend, Don DaGradi. Don played many roles in the Disney Studios; during his long career he was a background artist, story writer, art director, and wrote screenplays. I think Don’s talent was synonymous with many of the Disney greats in that he was able to do many things and did each one very well. The second Disney employee I’d love to see the world through is Randy Thornton. As Senior Producer of Product Development at Walt Disney Records, Randy is responsible for many items but my personal favorite is Randy’s work involved with the release of ‘A Musical History of Disneyland’ which is a Disney music lover’s dream.

When I’m in the parks it’s a must stop in Adventureland for a Dole Whip. Nothing else will do!

Hands down, it’s the Polynesian. We’ve been fortunate to spend nights in more than half of the WDW resorts and, in my opinion, this monorail resort is the best. For large groups (and we’ve had a party of more than 20 before) Old Key West is our favorite. Finally, for nostalgia’s sake, the old Disney Institute is one I miss.

Inside the parks it’s the Tomorrowland Transit Authority. There’s something special about riding the escalator up to the moving platform, taking a seat, and then riding through Space Mountain, the EPCOT model, and hearing Mr. Morrow paged for the millionth time. Outside, however, I love the area in between the front gates of the and the bus stops, looking at what lies ahead. There’s a tremendous excitement at that particular spot in WDW for me.

Bistro de Paris, in the pavilion at EPCOT, is a very nice restaurant and a favorite of our family. We have dined everywhere from Victoria and Alberts to the smallest ice cream cart but Bistro de Paris is where my wife and I head for a quiet dinner by ourselves.

That’s a great question; my family and I are headed down for a trip in November and my six-year old son indicated he wants to ride Space Mountain for the first time as soon as we step into the .

Fantasy in the Sky is a personal favorite; it’s the show I’ve seen more than any other and I think I might have it memorized due to the endless hours of video in my house! I really enjoy the current shows, Wishes at WDW and Remember. . . Dreams Come True at ; they are both tremendous.

Make sure you spend some time over at Photos From the Park and share some Disney Geeks love with him.