I am a frequent reader/viewer of Photos From the Parks. Richard posts photos that he has taken at Walt Disney World and Disneyland several times during the week.

In his own words:

Everyone takes photos at the various Disney theme parks; here are some of mine. If you’re homesick for Walt Disney World or Disneyland I hope this will get you through to your next visit.

He did a post about the Main St. Opera House and teased us with the following sentence:

As guests exit the show they are treated to an assemblage of exhibit items including original concept sketches and models for loved attractions within the Disneyland park. 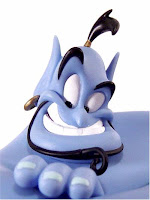 So being the penultimate Disney Geek, I left a comment on his post begging for more pictures of the exhibits. Lo and behold, I received an e-mail from Richard that my , er, wish has been granted.

So, once again, see what happens when you leave a comment on a blog (hint, hint, HINT). Us bloggers love comments. And we love requests.

So, anybody have an Orlando vacation home that they aren’t using?