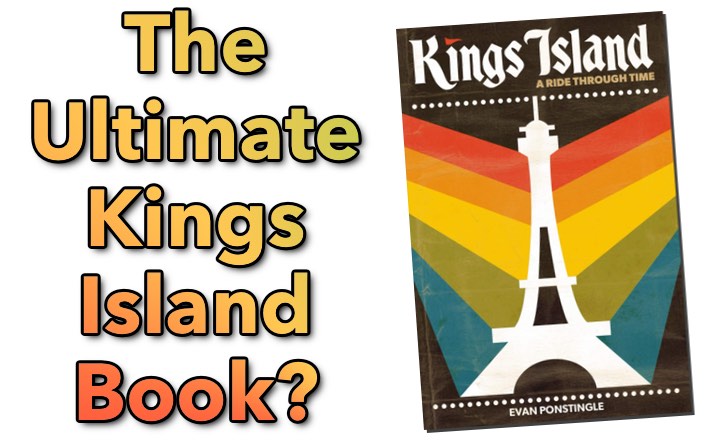 Kings Island: A Ride Through Time by Evan Ponstingle, a book review

Fans of amusement parks and roller coasters understand the importance of Kings Island, located outside of Cincinnati, Ohio. The regional park opened in 1972 and has had a long and storied history with different corporate owners and themes. Evan Ponstingle’s new book, King Island: A Ride Through Time is the first published history of the almost fifty-year old amusement park. I am slightly biased since my first amusement park experience was visiting Kings Island in the early 1970s with my parents. My mom and dad fondly remembered Coney Island and we made many trips to Kings Island until we moved to North Carolina. 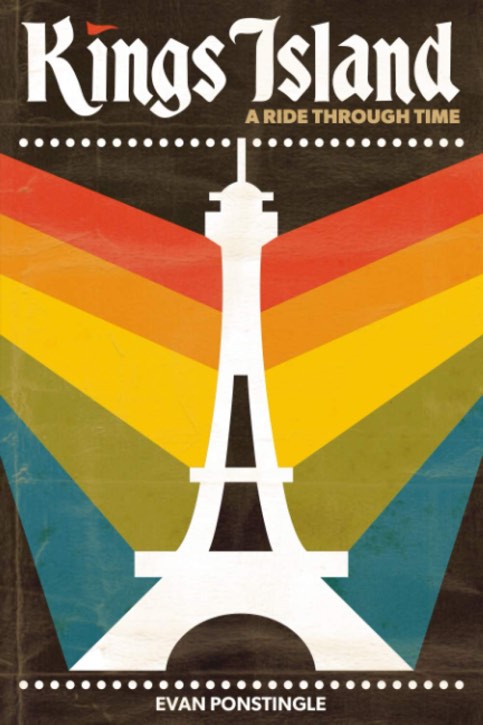 From my first ride on Enchanted Voyage to my last visit when I rode the ill-fated The Bat coaster from Arrow Dynamics, Evan’s book brought back all of the magic and all of the memories from my ten years of visiting Kings Island as a child;  I wouldn’t be able to make a return trip to Kings Island until an Ohio coaster trip in 2016. During that trip, every corner brought a new memory flooding back to life and childhood memories washed over me. I also discovered that eight year-old me liked spinner rides, like The Monster, more than adult me.

The book cemented timelines and answered many questions I had about the history of the park.

Evan offers a solid look at the history of the park throughout the 380 pages of the book. As expected, the largest portion focuses on the early history, including the troubles with Coney Island and the attempt to get Kings Island funded. See, Coney Island was a showplace (Walt Disney even visited Coney Island while planning Disneyland) and a Cincinnati institution. The consistent flooding of the Cincinnati River caused a multitude of issues and management needed a solution. Through interviews and research, Evan pulls back the curtains and shows the early machinations that led to Kings Island.

The book is fast-paced but Evan doesn’t compromise the history of the park or the people. The majority of the focus is on the first 20 years, but that was when the park was the most groundbreaking and went through the most changes. Evan takes us on a journey through the management transitions and discusses all of the changes, year-by-year in the park. We get the inside scoop of the new attractions, shows, restaurants, and shops. One of my favorite moments in the book was reading about how the Enchanted Voyage came about  and the amount of work and detail that went into the stunning dark ride. (For some reason, the clown teeth at the end of the ride terrified me.)

The insight Evan provides evokes more than the time he has spent working and visiting at Kings Island. Reaching out to former management and designers shows true credibility and the desire to research the topic through interviews and primary sources.

Coaster fans will love the stories of Walter Bollinger walking through the park and planning the future B&M masterpieces.

Who Should Buy Kings Island: A Ride Through Time?

Kings Island, along with Six Flags Over Texas defined the modern amusement park. With the debut of The Racer in 1972, Kings Island began the coaster wars  that still rage. Disneyland influenced Kings Island through the theming and architecture. Obviously, fans of Kings Island and regional parks are going to treasure Evan’s book. Theme park historians will appreciate his deep dive and presentation.

If you had the chance to visit Kings Island during its first fifty years, then this is the book for you.

Do You Have Any Special Memories of Kings Island? When Was Your First Visit?

</center
FTC Disclosure:  This post contains affiliate links. ImagiNERDing receives a percentage of sales purchased through links on this site. Thank you for your support!

2 thoughts on “Kings Island: A Ride Through Time Book Review”