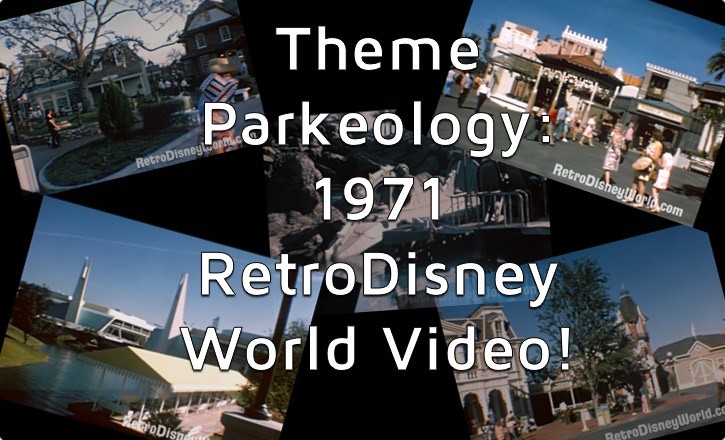 November 1971 Magic Kingdom had to have been an amazing time. People knew Disneyland but Walt Disney World was brand new and something different. through an amazing video.

Last year, RetroDisneyWorld.com released a five and a half-minute video of restored movie footage from a Super8 print of a visit to the Magic Kingdom in November, 1971. As mentioned on their site, this is probably the earliest video footage that any of us have seen from the Magic Kingdom.

@BrianPMiles was nice enough to send me a reel of film that he obtained from a garage sale. The film canister said “Florida November ’71″ and he took the chance that there was some WDW footage on it. Well his curiosity paid off, sandwiched between visits to Silver Springs and other Florida attractions was pristine footage of the Magic Kingdom in November 1971 – at this point this is the earliest post-opening film of WDW that I’ve ever seen. –RetroDisneyWorld.com

The film is pretty amazing and really shows off a very young Magic Kingdom. There are times when her foliage just isn’t as well-grown as we’re used to and it looks like she just got her hair cut. I know, that’s an odd analogy. Let’s take a look at some screen captures and do some theme parkeology! 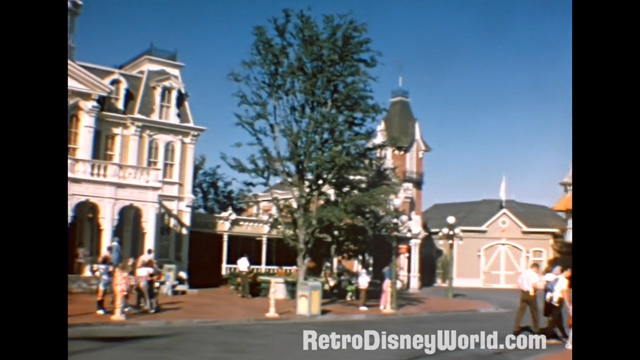 One thing to notice, immediately, is the colors on the buildings. In some cases, they feel really muted. This first shot is interesting because of the tower on the fire department building. When you watch the video, it looks like it’s covered with a screen, but in this image, it looks more like the shingles.

Just a great shot down Main St., USA showcasing the Christmas decorations. This does help reinforce that the video was taken during the holiday season of 1971. 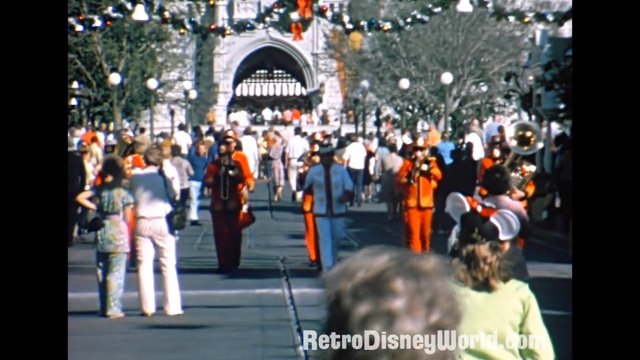 Closeup shot of the hub, mainly to see the trees that would last almost 30 years.

The delivery truck on the right side of this photo is wonderful. It’s the Borden’s Milk Delivery Wagon. Borden’s sponsored the Plaza Ice Cream Parlor from 1971-1981 (Sealtest would take over from 1981 to 1993). We’re seeing the view from Main St. at the corner that leads to Tomorrowland and the steel structure rising must be for the Plaza Pavilion, which would open in 1973.

Eventually, this would be the first queue for the Swan Boats, but not until 1973. Check out Foxxfur’s amazing article about the Swan Boats and the Plaza Ice Cream Plaza to get the full story. It’s very hard to see in this screen capture, but the water is flowing down the Tomorrowland spires. 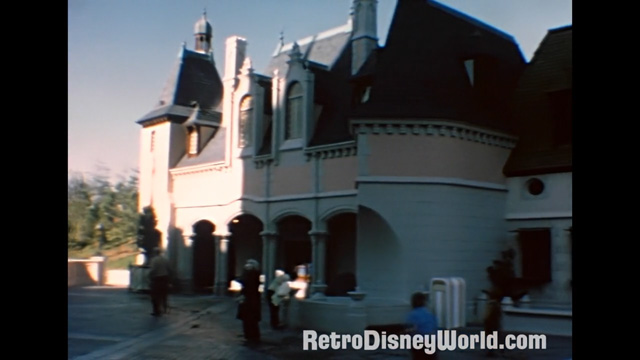 In this shot, we’re standing just inside the castle courtyard. Notice anything missing from the fountain to the left of the garbage can? Yes, the statue of Cinderella and the fountain have yet to be installed. Anyone know when the statue was installed? 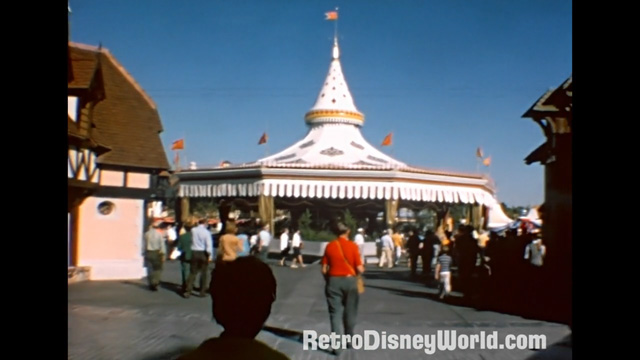 Just an interesting shot of Cinderella’s Golden Carrousel. You can see the angular bench with the planter.

A great shot of the 20,000 Leagues Under the Sea Submarine Voyage lagoon. 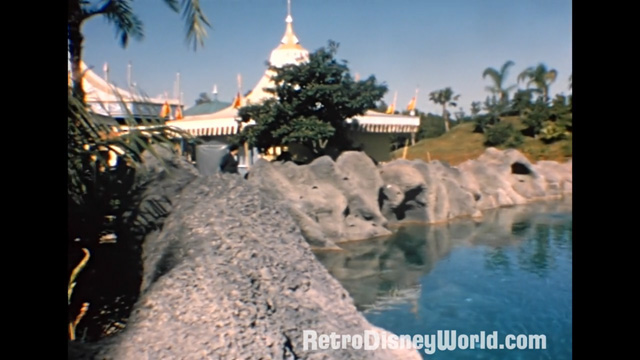 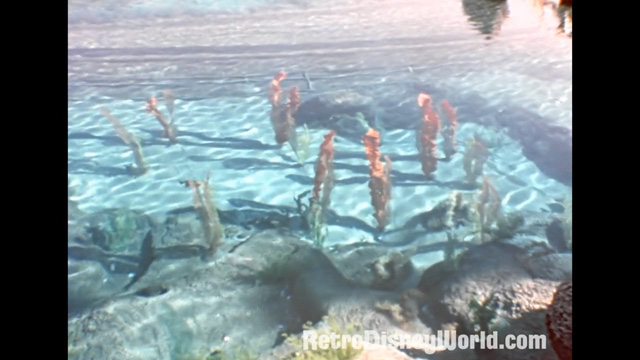 It’s amazing to see how crystal clear the lagoon was!

Just a great shot of the submarine at the load area. 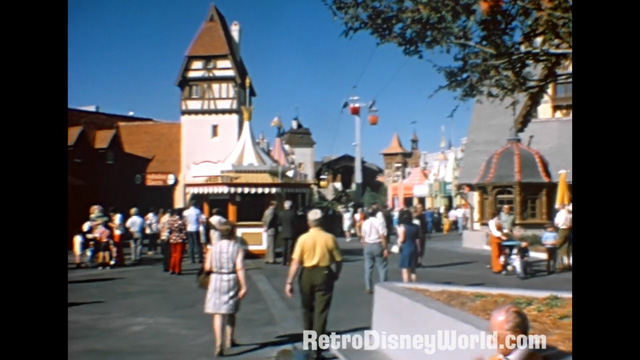 Talk about a new Fantasyland! Pinocchio’s Village Haus on the right, the Skyway to Tomorrowland in the middle and a ticket booth towards the left. You can barely make out the sign for the Troubador Tavern to the left of the ticket booth! The Troubador Tavern existed until 1993 and served drinks, chips and cake! Cake? Really?

Remember that this Fantasyland was a huge improvement over the 1955 Disneyland version and would subtly influence the 1983 remake.

Just a great shot of the entrance for the Mickey Mouse Revue. The Mad Hatter shop would be towards the right. 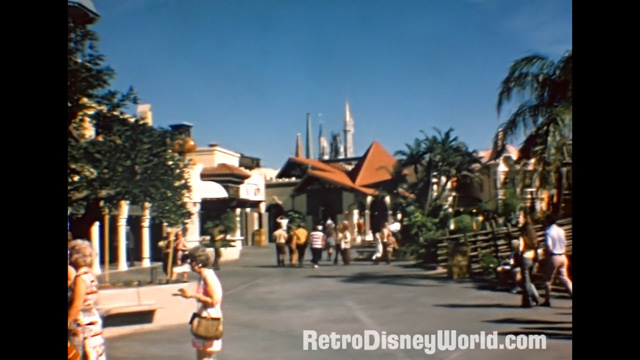 Heading over to Adventureland with the Swiss Family Island Treehouse to our right. Straight ahead are the restrooms and a walkway to Liberty Square/Frontierland (currently, it’s a covered walkway with restrooms that sort of leads to the Liberty Tree Tavern). The building on the far right is the Veranda Juice Bar. 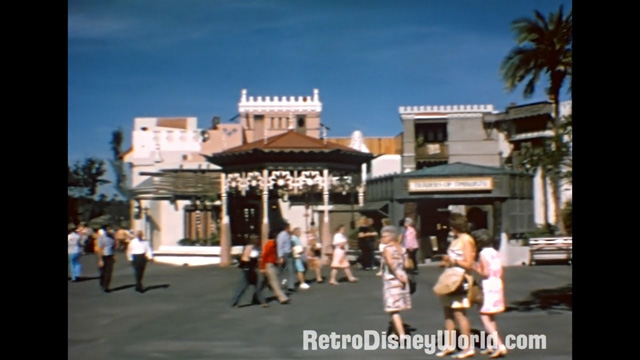 Sadly, today, this is where the Magic Carpets of Aladdin is. The green building on the right is Traders of Timbuktu, a shop that sold trinkets such as carved wooden giraffes, jewelry, dashikis and khaki shirts. 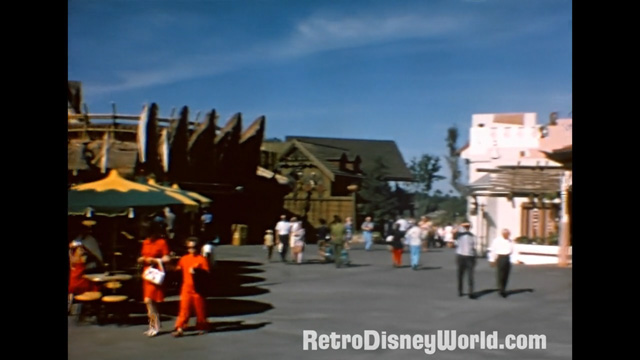 Yep, it’s the Sunshine Tree Terrace with those amazing umbrellas and seats. In the middle is the (now covered) walkway to Frontierland with the County Bear Jamboree on the left side of the walkway. Until Caribbean Plaza opens, this courtyard is the end of Adventureland. 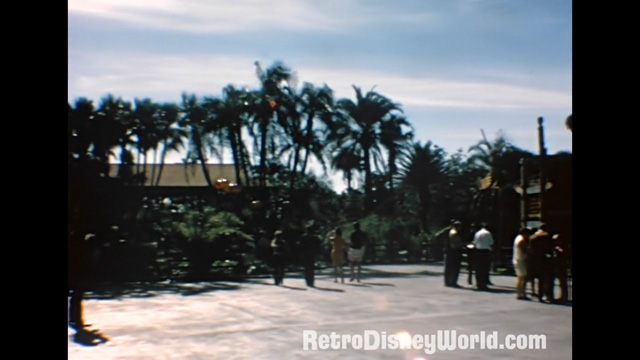 The Jungle Cruise is on the right with the Tropical Serenade to the left. The fence posts will eventually lead to Caribbean Plaza. 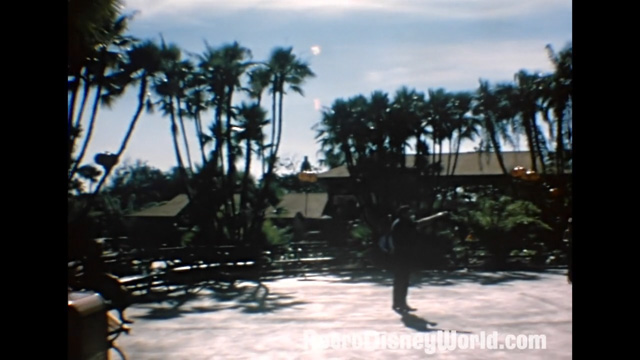 This is the actually entrance to the Jungle Cruise. It’s still there, between the courtyard in the previous photo and the Swiss Family Island Treehouse on the left. 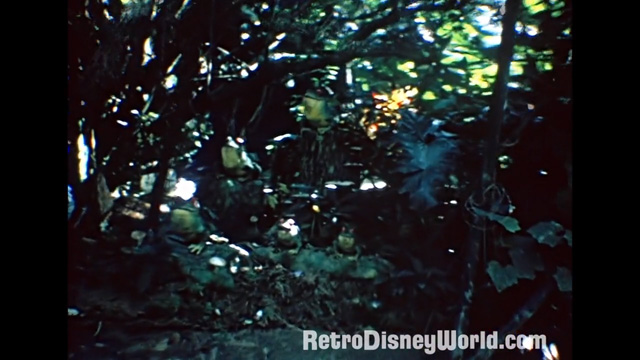 It’s hard to make out in this photo but looks spectacular in the video: it’s the singing frogs of the Jungle Cruise! Apparently, Dick Nunis thought they looked hokey and had them removed a few months after the park opened. You can read more about them, here, on the Widen Your World Jungle Cruise page. 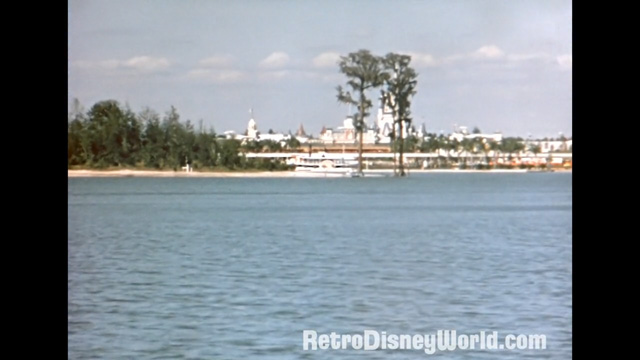 A view from across Seven Seas Lagoon shows the cypress trees that are now stumps. 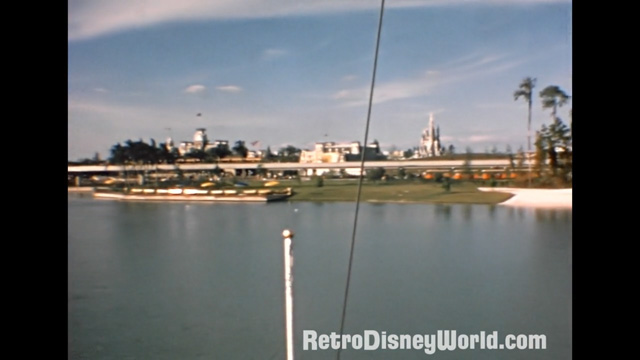 You can see the orange trams heading from the Magic Kingdom back to the parking lot! 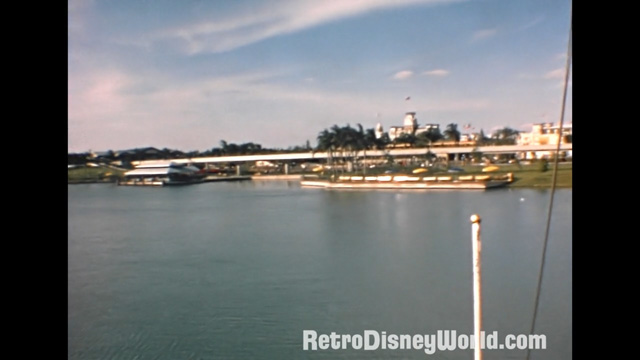 So, the current ferry dock isn’t here, meaning that the sidewheelers were the main ships used to transport guests. 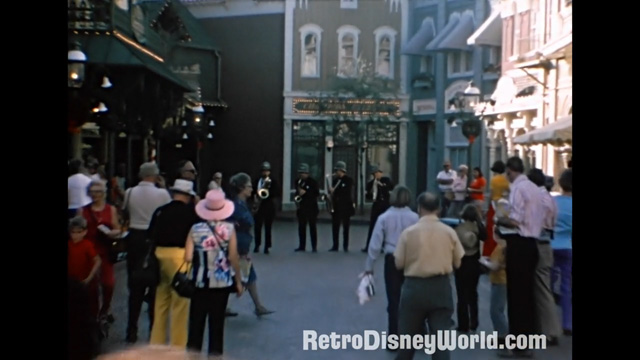 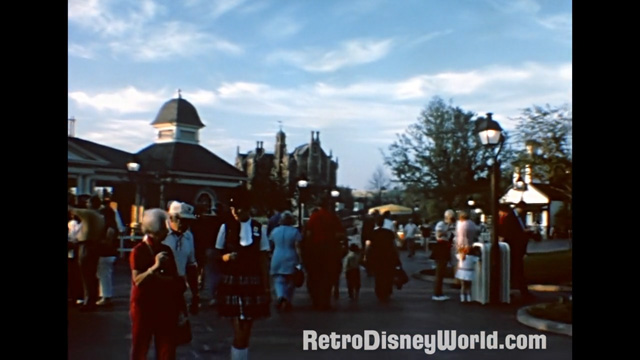 Check out that spooky house sitting on the hill. It looks rather barren without the past 40 years of trees. To the left is the Yankee Trader. Any one up for a Guided Tour of the Magic Kingdom? The three-hour tour only cost 6.75 for adults and included five attractions with the guide. Sign me up! 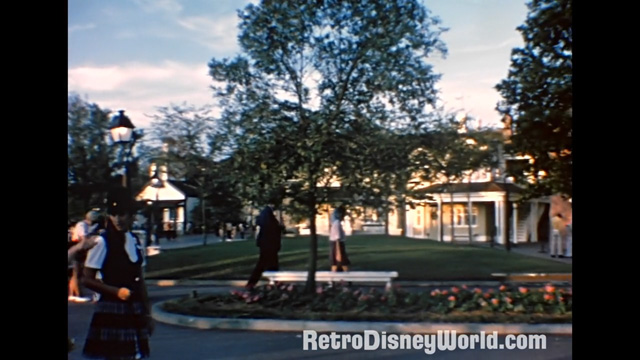 The Columbia Harbour House is behind the tree, but it won’t open until very late spring of 1972. The grassy area (sort of like a commons) can be seen clearly. 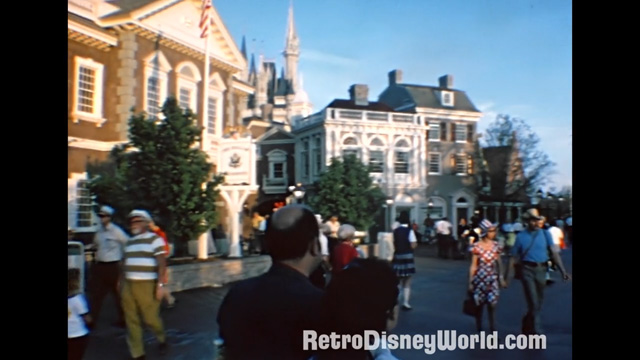 Just a great shot of the Hall of Presidents, the Heritage House and Sleepy Hollow Refreshments.

The stone building to the left housed Mlle. Lafayette’s Parfumerie, the Olde World Antiques and the Silversmith. To the right is the back of the Liberty Tree Tavern and the  Diamond Horseshoe Revue. Oh, and you can see the Liberty Tree with the apparent holes from when it was moved across the property to this location. 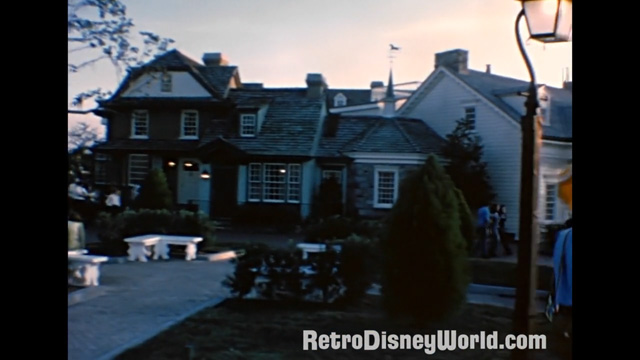 Just a shot of the courtyard and the buildings. 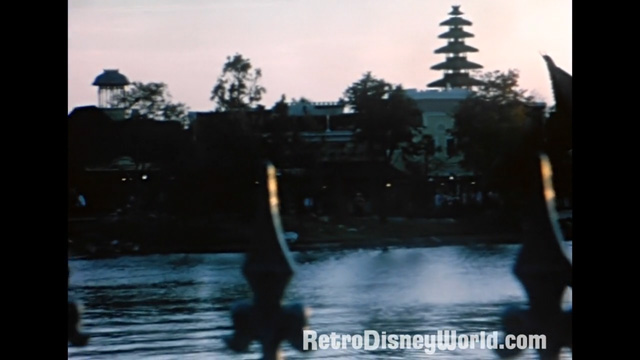 This shot is from the queue of the Haunted Mansion looking across the Rivers of America at Frontierland and the tower for the Tropical Serenade. 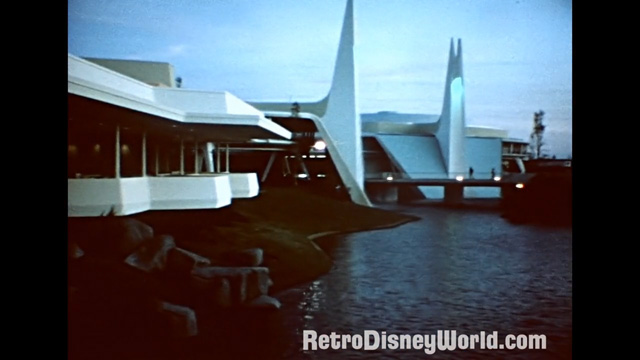 Check out the full video:

A pristine Magic Kingdom from Nov ’71 – Restored Home Movie footage in HD from RetroWDW on Vimeo.

What do you think about the November 1971 Magic Kingdom footage? Is there a time you’d love to visit? Let me know in the comments!