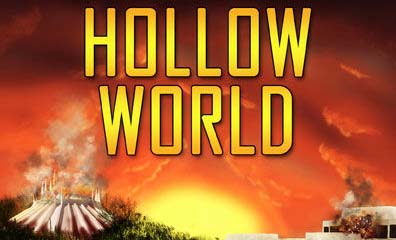 George: Anyone who reads us regularly knows that we’re not big fans of fiction set at Disney parks. We’ve run across a few titles, though, that have been fantastic reads. This summer, we reviewed Disneylanders by Kate Abbott and we were both enamored with this tween story set at Disneyland. Our Kingdom of Dust, the second publication from Bamboo Forest Publishing was also a fantastic read. Both titles were written by authors with a love of the parks and an intimate knowledge of the geography. So, when Hollow World rambled across our respective desks, we were excited—not only because it’s a Bamboo Forest title, but the advanced material showcased an exciting and fast-paced story. And there were flaming monorails!

Jeff: Agreed. Anything that shows a monorail on fire or things blowing up is bound to hold my attention, and Hollow World did not disappoint.Telling the story of a detective on vacation at Walt Disney World who gets caught in a deadly game of cat and mouse with a psychopath while his family’s life is on the line, I was truly blown away. Not only is the story great…but it just happens to take place at Walt Disney World. 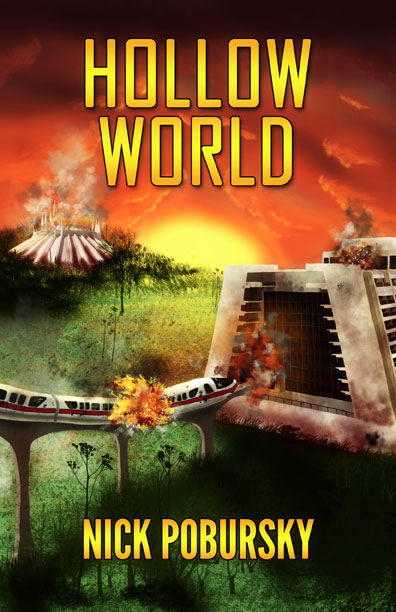 George: Nick’s book had me within the first few pages and kept me on the edge on my seat until the end. It’s more than just an action-packed novel, it’s filled with believable and highly likeable characters. Nick also tells a great story that never seems to lag or get caught up in too much action. Based on the cover, I was expecting a Die Hard story line with lots of action—granted, there was lots of action but it was deftly woven within a plot that had me guessing and truly wondering what was going to happen next.

Jeff: It wasn’t just all action, all the time. The characters that Nick created were likeable (the ones you were supposed to like) and believable. He hints at their back stories (which you can read up on a bit in the prequel stories, available as a free download on iTunes or Kobo), and makes them real characters. He certainly created a well-rounded-out cast of characters that I wouldn’t mind seeing in future installments. But getting back to what George said, the plot did keep me guessing until the end. Sure, there were some action-film cliches that you’d expect, but there were some new surprises thrown in, too.

George: So, who’s going to enjoy Hollow World? If you’re a fan of suspense stories or well-devised plots that keep you thinking, then you’re going to enjoy the book. As expected, there is a fair amount of violence in the novel, but it never detracts from the story or the characters. Nothing that happens seems out of place for any of the characters. The language is fairly adult, but it’s nothing that you wouldn’t hear in a rated R blockbuster. That being said, most well-read Disney fans are going to enjoy this one.

Jeff: I think it also takes a sense of humor to enjoy the book as well. Though some people will probably bash him for his choice of setting, it’s fairly obvious that Nick enjoys Walt Disney World quite a bit. He knows the layout and uses it to his advantage. At no point is the setting merely a prop to say, “Hey, look where we are!” Instead, he kind of creates it into its own character in a way, integrating it into the story flawlessly. Action fans, and Disney fans, will both get a kick out of this book.

George: A lot of people compare novels at the parks with the Kingdom Keeper series. We both love Ridley Pearson and enjoyed the Kingdom Keeper series (although, you do have to suspend a lot of disbelief) but Nick’s book is miles apart and set for a completely different audience. As Jeff mentioned, Nick uses the Vacation Kingdom of the World as a backdrop to keep the story moving and not as a gimmick, which we’ve seen in other works. To me, along with Disneylanders (by Kate Abbott) and Our Kingdom of Dust (by Leonard Kinsey), Hollow World is a terrific read by itself, regardless of the setting. Adding the parks is just icing on the cake, er, dust jacket. Well, it just makes it that much better!

Have you read Hollow World? Do you have a favorite book set at a Disney park?

One thought on “Hollow World by Nick Pobursky, a review”