Carowinds (Charlotte, NC) is a great local park with more than a handful of roller coasters. They’ve evolved over the past 40 years, bouncing from Disneyland-clone to amusement park to thrill park. With the purchase by Cedar Fair a few years ago, it looks like Carowinds is slowly turning into more of a theme park. Carowinds has some great coasters and I’d love to see a lot more theming take over the entire park. The need for shaded walkways was very apparent, even during a spring visit. Let’s hope that the upcoming announcement will show that Cedar Fair is pumping some money into this local favorite. Check out my earlier post about Carowinds. 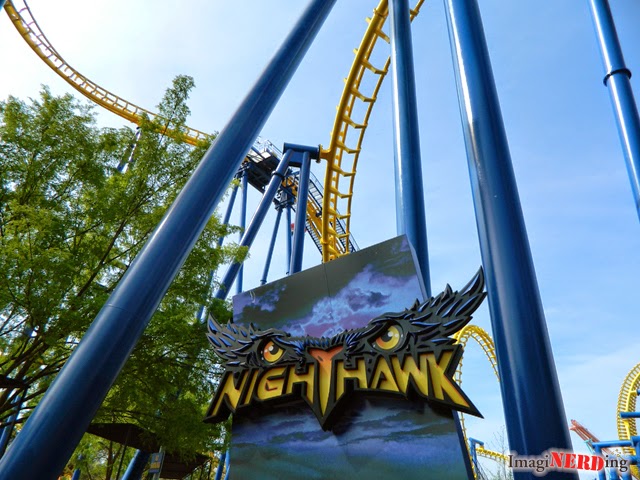 Our first ride of the day was Nighthawk, a flying coaster with eight inversions. During our visit, we’d received one free Fast Lane ticket. We new we’d need to use it on Nighthawk or the Intimidator. After speaking to a very friendly employee, he advised using it on Nighthawk since most of the other coasters loaded faster. 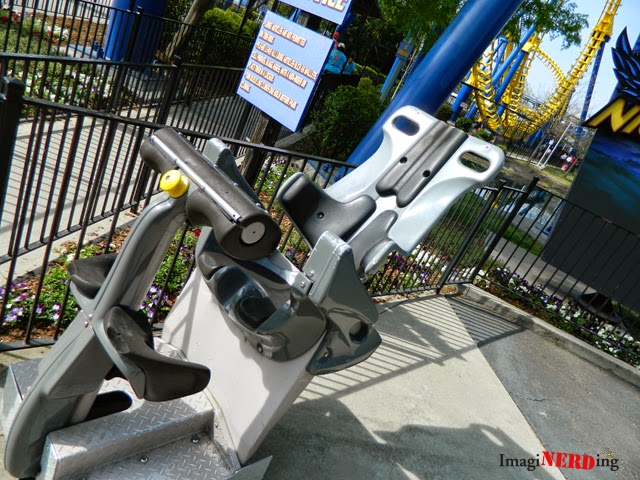 There was a seat located at the front of the queue to give you an example of the seating configuration and style. It’s nice to offer this to guests, but I would have like to seen it in a more out-of-the-way area for guests that might have weight issues. 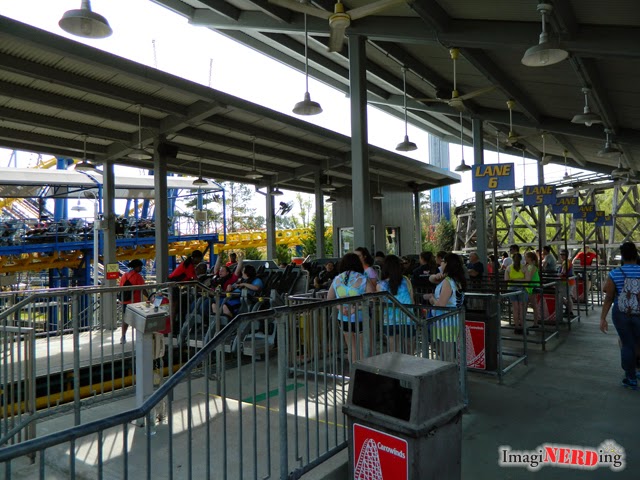 The queue was fairly straightforward, and even first thing in the morning, it was a 45+ minute wait. We used our Fast Lane ticket, which cut the wait to slightly less than 15 minutes. As you can see from these images, you load on your back and crest the first hill like that. Most of the coaster is spent hanging. 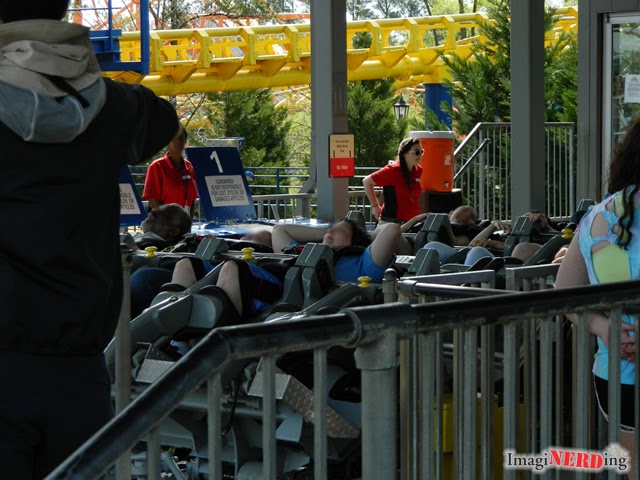 It really was a great coaster but we would run into the same experience again and again: we spent more time in load and unload than we did on the ride. It detracts a lot from the total experience to wait to start and then wait to unload. It’s the reason that we skipped a few of the coasters, like the Carolina Cobra and the Vortex. I’d ridden them before and was bothered that I spent more time loading than enjoying the coaster. Nighthawk clocks in at two minutes and I wonder if there’s a way to engineer a separate load and unload zone for the coaster to speed things up.
Still, hitting Nighthawk first thing in the day is a great way of experiencing this flying coaster (I’d love to do it at night, too).
The Intimidator 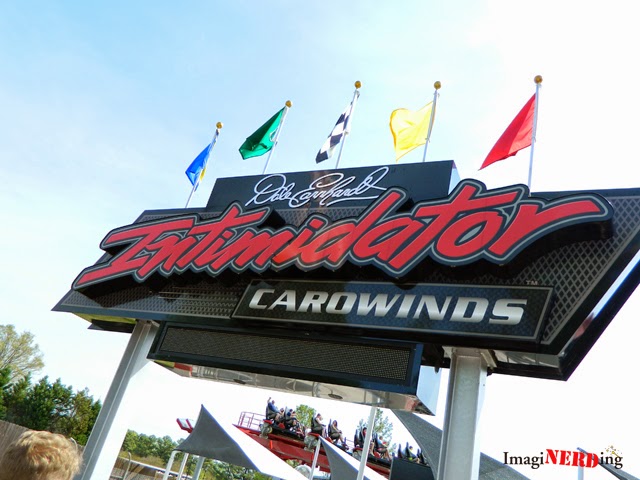 Besides California Screamin’, the Intimidator is one of the best coasters I’ve ever experienced. You can ignore the heavy NASCAR theme and don’t let it keep you from this fantastic hyper coaster (a hyper coaster is defined by exceeding 200 feet, lacking inversions and having a lift hill). The Intimidator’s lift hill is 232 feet and it’s the tallest in the Southeast. 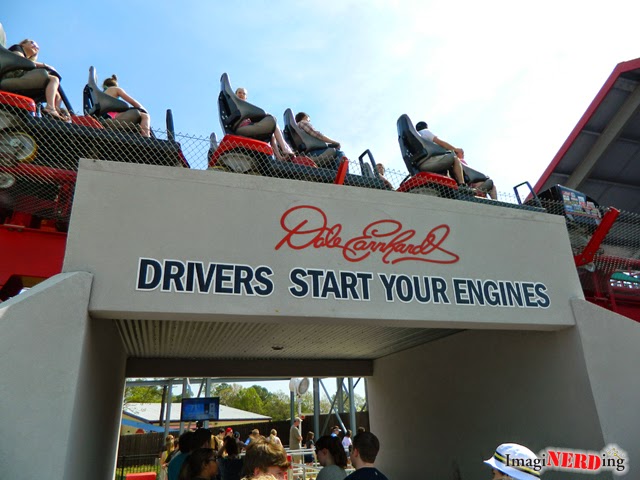 The queue is mostly in the sun but you get a great view of the ride vehicles before they re-enter the load/unload zone. 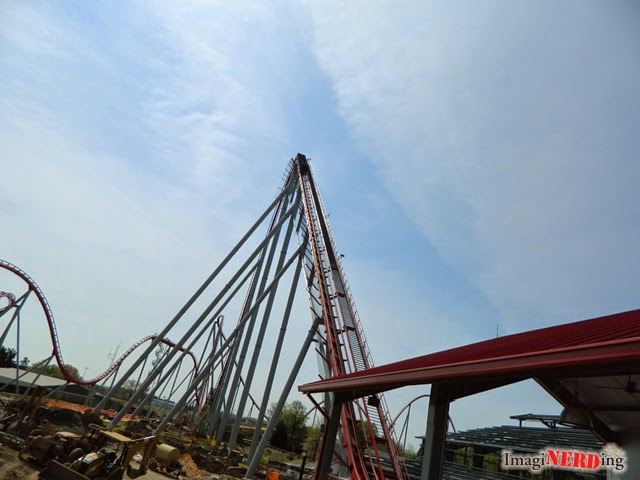 That first lift hill is quite amazing and the ride doesn’t give up until right before you hit the unload zone. We rode it twice in a row and that was just one ride too many. It would have been better to tackle the coaster again, but later in the day. Don’t let the first lift hill scare you away; the Inimidator is an amazing coaster.
Afterburn
Afterburn is an inverted coaster with six inversions and it clocks in at two minutes and 47 seconds. 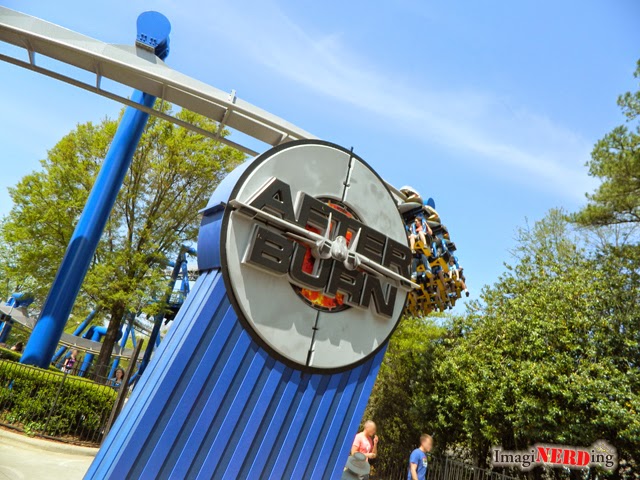 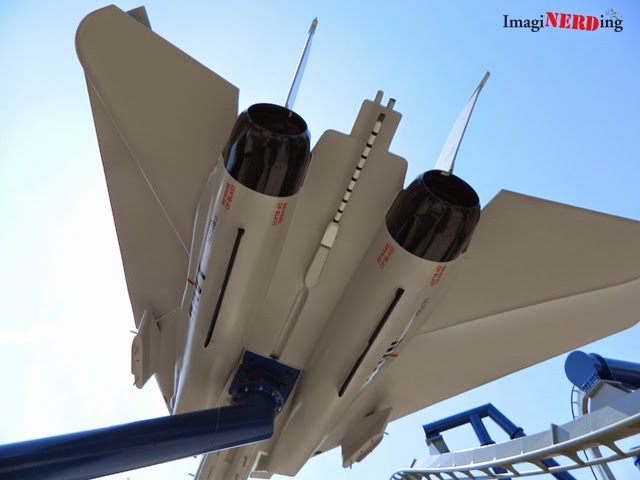 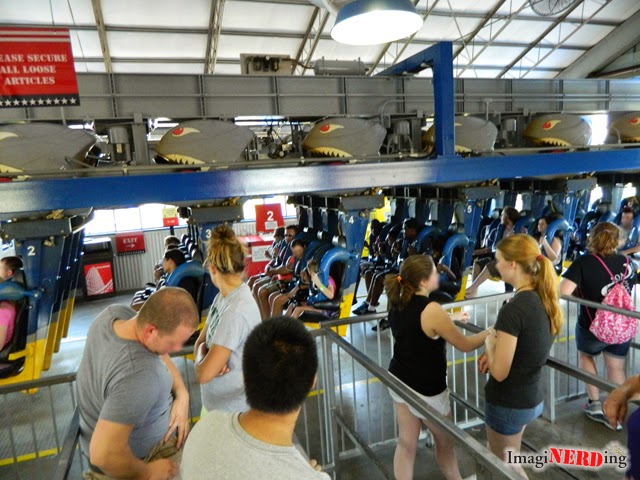 The load didn’t seem to take as long, and at almost three minutes, it’s a very satisfying coaster. Afterburn has always been one of the most popular coasters at Carowinds, since it was added in 1999.
Ricochet 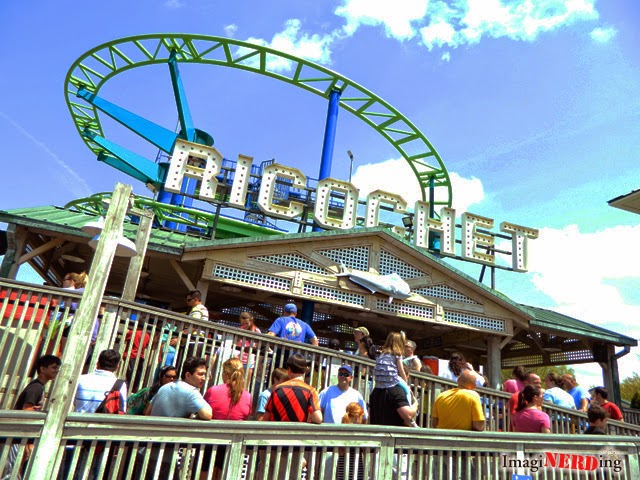 Ricochet is a wild-mouse coaster that packs in quite a bit of scares and screams. I’m a huge fan of wild mouse coasters. Ricochet is just under two minutes and always seems to have a long wait in the queue. 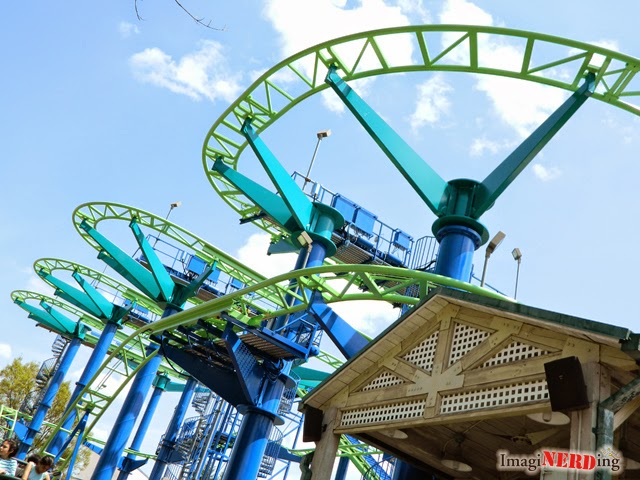 We were in the front seat of the four-person vehicle and there were two large “football-type” guys. I just bring it up, because they were screaming the whole time that they were going to die. I ave to admit that it was more frightening than the Intimidator. 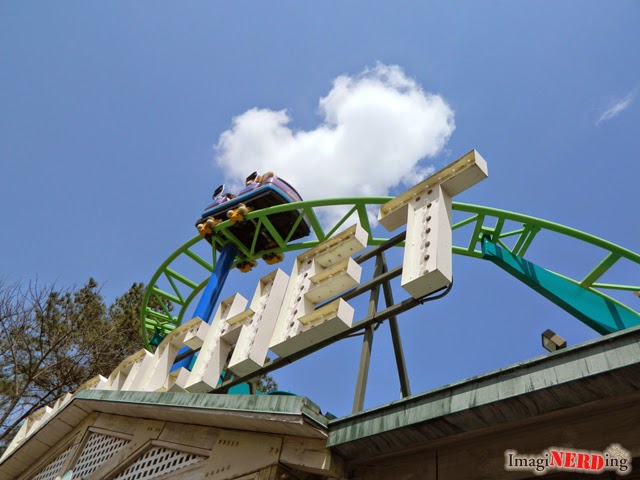 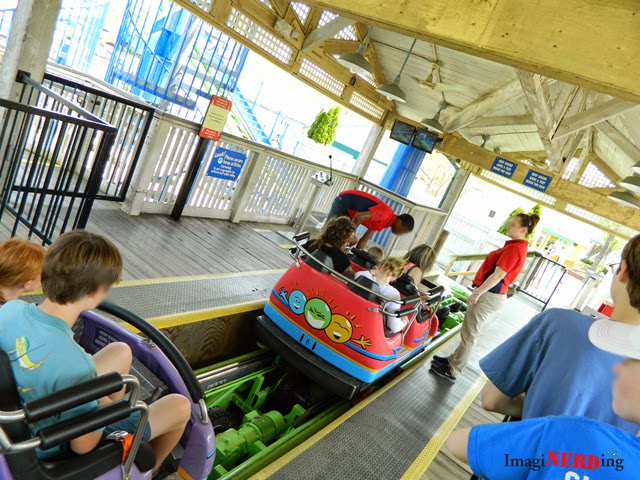 Again, it does take a long time for the load and unload process of the Ricochet. It’s a great coaster but the wait can be a killer. Because of the single entrance, Fast Lane is not available for this attraction.
The Hurler 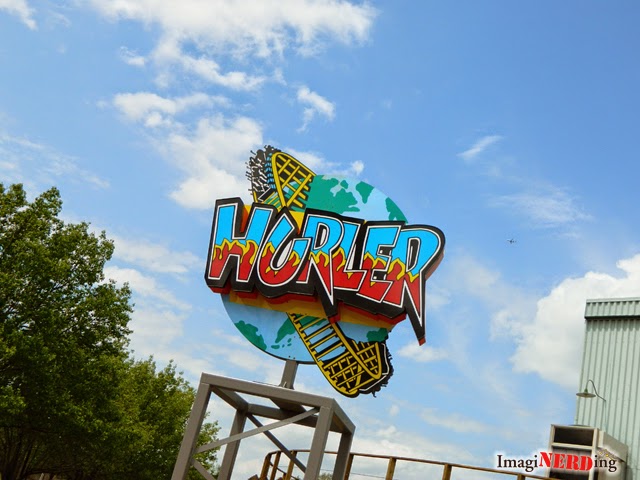 The Hurler is a classic wooden roller coaster that reached 50 MPH and lasts for two minutes. I rode it many years before when the entire area was themed to Wayne’s World.  It’s a very bumpy and rickety coaster that seemed a little too bumpy for us. When we headed around the main curve for the big drop, you could see the amount of storage and construction material that was hidden from outside view. It’s obviously storage for Scarowinds. The queue winds through the base of the coaster, which is a great way to get riders excited about it. 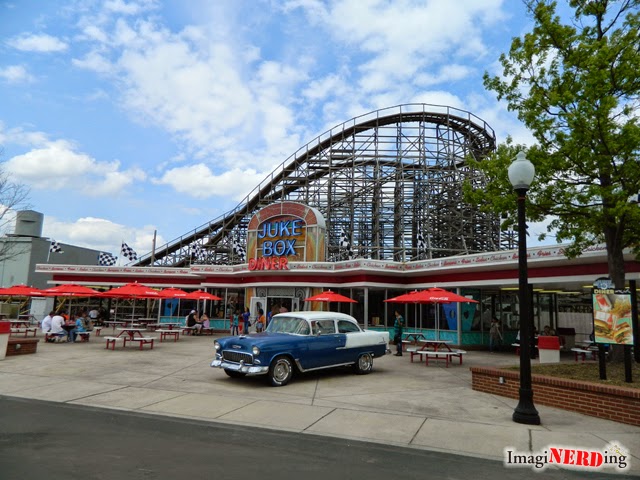 The Juke Box Diner was a Stan Mikita’s when the entire area was themed to Wayne’s World (when Paramount owned Carowinds).
Carolina Cyclone 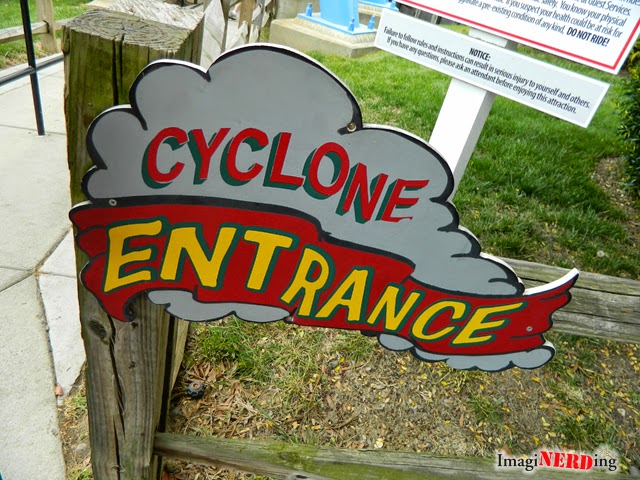 Installed in 1980, the Carolina Cyclone was the first coaster in the word to turn riders upside down four times. It’s an Arrow Dynamics ride (that name should be very familiar to Disney fans) and comes in at an embarrassing 60 seconds. We spent more time waiting in the hot sun to get into the unload zone before we were able to exit. 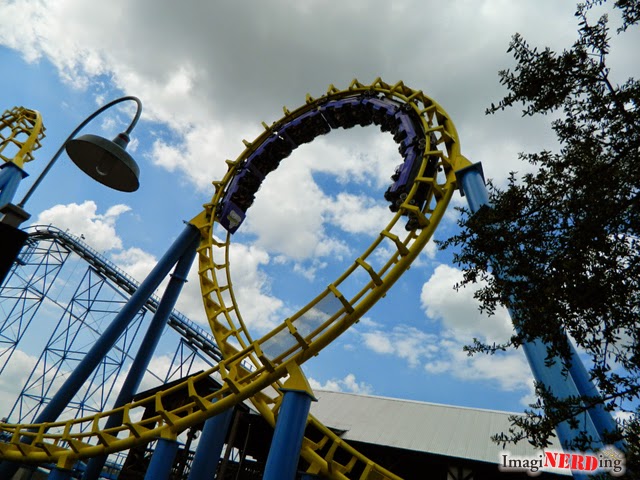 A caveat: each car holds four people and the back seat has much less leg room than the front. It was very uncomfortable for two six-foot guys to sit in the back seat. Since you can choose your own row, I’d suggest you opt for one of the front seats. 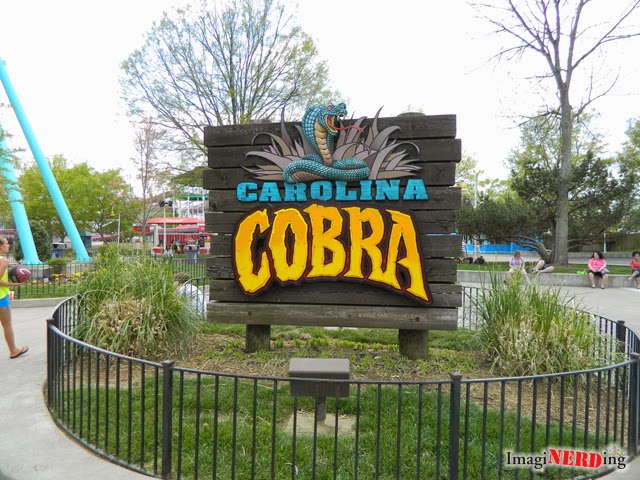 By the time we reached the area of the park with the Carolina Cobra, we decided that we didn’t want to wait in that long of a queue. The ride is two minutes long. You experience three inversions then travel backwards through the ride for three more inversions. Obviously, the load and unload would have taken a while. 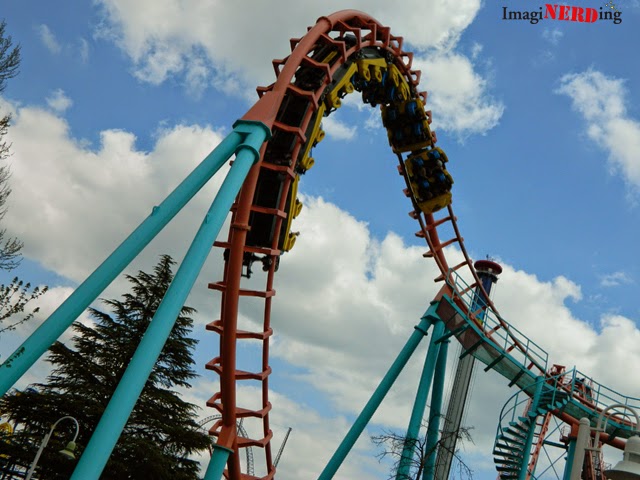 The Carolina Cobra was very popular and it looked like a great experience. Maybe on my next trip.

There were some other coasters that we didn’t get to, including the Carolina Goldrusher and Thunder Road. The Goldrusher is an opening day attraction and is still a park favorite. It’s a runaway mine train ride that last for two minutes and 17 seconds. I’ve ridden plenty of times on previous trips and it’s a great little coaster that’s also a great first grown-up coaster wants kids reach the 48″ height requirement. Thunder Road debuted in 1976 and is the first coaster to straddle two state lines! Thunder Road is also known for helping to usher in the great coaster races of the late 1970s that continue today. They’re both great coasters but we simply ran out of time during our visit.

Do you have a favorite Carowinds’ coaster?