The debut of Remy’s Ratatouille Adventure at Epcot in October of 2021 offered guests a new experience as part of the their visit to Epcot. Similar to Frozen Ever After, the Ratatouille-based attraction is a much needed family-friendly addition to the park. During the annual passholder previews, I was able to spend some time investigating the courtyard to check out the architectural and hidden details.

Overall, the Remy’s Ratatouille Adventure is a rather blasé and mediocre attraction. When you watch people exit Rise of the Resistance and Mickey and Minnie’s Runaway Railway, there’s a sense of joy and excitement. While waiting on two separate groups to exit Remy’s Ratatouille Adventure, I noticed that guests weren’t overtly excited about the attraction and didn’t mention wanting to experience it a second time. My initial opinion on the Ratatouille-based attraction is that it is underwhelming and not the attraction that Central Florida deserves. I’m not a fan of Disney cloning attractions, especially a subpar attraction that was pioneered by Universal more than 20 years ago (like the still astounding Amazing Adventures of Spider-Man at Islands of Adventure). I really want to see Disney bring more innovation and more dark rides to the Walt Disney World Resort.

When you spend time in the courtyard, you realize that the subpar nature of the attraction has crept outside. Unlike the previous World Showcase pavilions, the area for Remy is simply a long corridor connected to a rectangle. The mystery of discovering what’s around the corner, like in Morocco, is nonexistent and you see a restroom and the line for the Les Creperie de France. Even though I had seen the area multiple times from the Disney Skyliner, I was still hoping for more excitement in the area, as opposed to the waiting area for the attraction. The architecture built into the back of the Palais du Cinéma is attractive and well done, but the area still feels rather anit-spetic.

Let’s move on to some of the tributes found in the area.

To the left of the fountain is a storefront window for items related to Ego from the animated film. In  the display window are items like olives, sardines, pork pate, mustard, and anchovies. There are also three displays of wine from Chateau Ego. 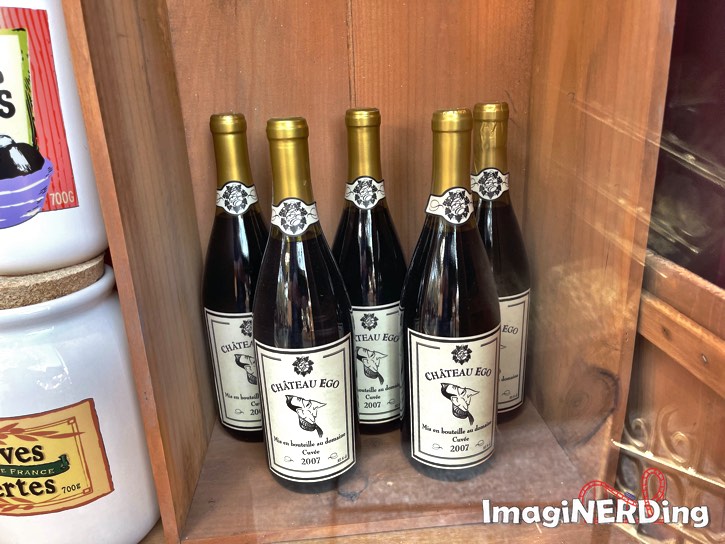 The first set of bottles feature the text “Mis en bouteille au domaine,” which translates into bottled at the estate. Cuvée usually refers to a wine of superior quality.

What’s important is the date on the bottles: 2007.

2007 refers to the theatrical release of Ratatouille.

The next set of bottles has the same label, except with red detailing and circle around Ego’s caricature, and the year is 2014.

For the last image, the bottles have a gold imprint and the year is 2021, which obviously refers to the opening of Remy’s Ratatouille Adventure in Epcot. I assume that the gold detailing is a tribute to the 50th anniversary of Walt Disney World.

Have You Experienced Remy’s Ratatouille Adventure? What Do You Think About this Older Attraction Being Brought to Epcot?