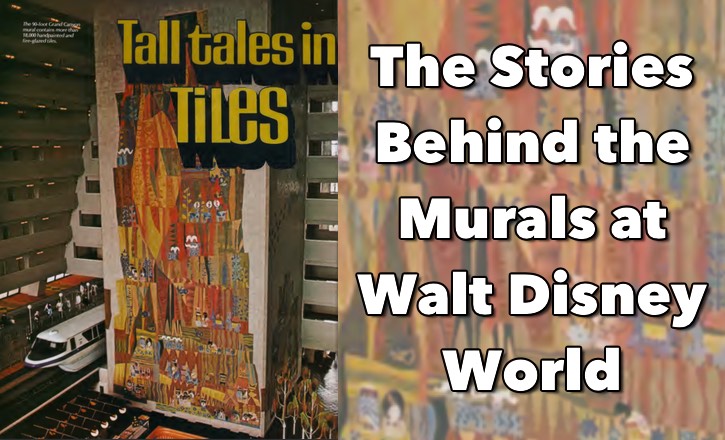 The Disney News from the summer of 1976 showcases two very important murals at Walt Disney World: Cinderella Castle and the Grand Canyon Concourse murals. Both of these works have stood for almost 50 years and are a part of every Walt Disney World vacation. Check out the article to learn more about the artisans and how the murals were created. 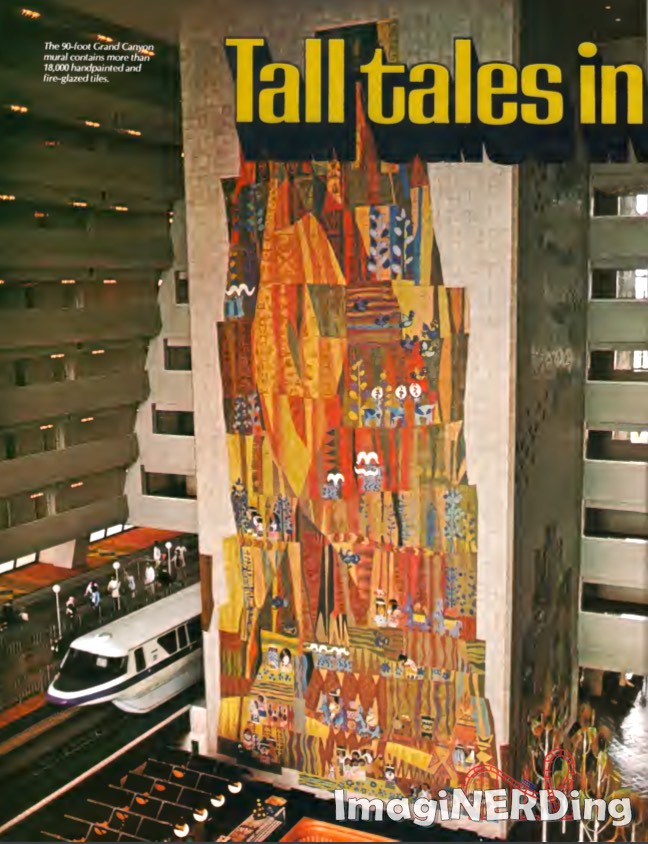 Murals, an art form originated in 5000 B.C. by the Mesopotamians of southwest Asia, have been popular through the ages and are still used as ornamentation on many buildings. At Walt Disney World, two charming tales are visually depicted through this ancient art. 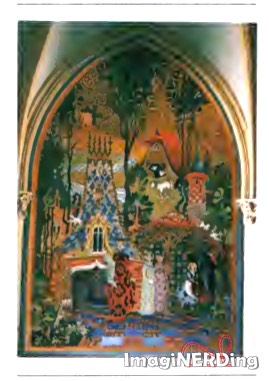 Each of the murals was redrawn from Ms. Redmond’s paintings to life-size proportions on heavyweight brown craft paper. The entire finished drawing, called a “cartoon,” was then divided along natural lines into work- able sections, called “sheets.”

Meticulous attention to details in the original paintings was faithfully maintained by Scharff as he re-created the design on mural sheets in his California home. In the first mural there were approximately 55 sheets, each less than two feet wide.

Then, using the indirect method of mosaic design, the tesserae (tiles) were first glued in reverse (both backwards and upside down) on the paper sheets bearing the design.

When completed, the sheets were packed for shipping across the country. After being sprayed with a water mist to prevent the glue from drying and the mosaic from bulging and shedding the glass tiles, the sheets were wrapped tightly in polyester film. 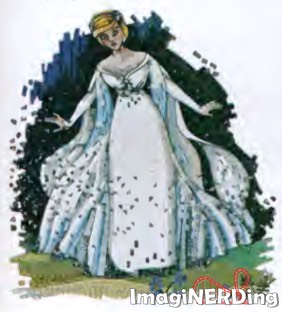 Then, when all the sheets arrived at Cinderella Castle, they were reassembled on the wall by pressing the reverse side into the wet plaster. Later, the glue and brown paper were sponged off.

The five completed murals contain hundreds of thousands of exquisite jewel-like pieces of glass; some of them are fused with silver and 14-carat gold. More than 400 regular colors and 100 additional accent colors are used in the picturizations.

Both smooth-faced Venetian glass and rough, irregular pieces of glass called “smalti” (used traditionally by Italian craftsmen) are included in the mosaic panels. Some pieces are as small as the head of a tack and many were hand cut and shaped by using a power grindstone.

Another tall tale in tiles can be found in Walt Disney World’s Contemporary Resort Hotel, only minutes from the Cinderella Castle via the futuristic monorail system. Towering above the hotel’s longer-than-a-football-field concourse mall is a massive 90-foot-high ceramic mural, unlike any in the world. The design of the mall and mural were inspired by the concourse’s theme—the Grand Canyon—appropriately named because of its vastness and similarity to a great open canyon.

Based upon the culture of the Grand Canyon and southwestern Indians, the mural’s motifs were designed by Disney artist Mary Blair at WED Enterprises. Her inspiration for the mural came from a broad spectrum of resources, including Pueblo murals and Navajo ceremonial art, such as sand paintings. She also designed the two tile murals adorning the main concourse of Disneyland’s Tomorrowland.

“Children and animals are such a part of the art of Disney that they were chosen for the mural to show activities of the people of the Grand Canyon—with a whimsical touch of fun,” explained Ms. Blair. “If any Indian art sources were to be singled out they would be Pueblo, Navajo and Apache” 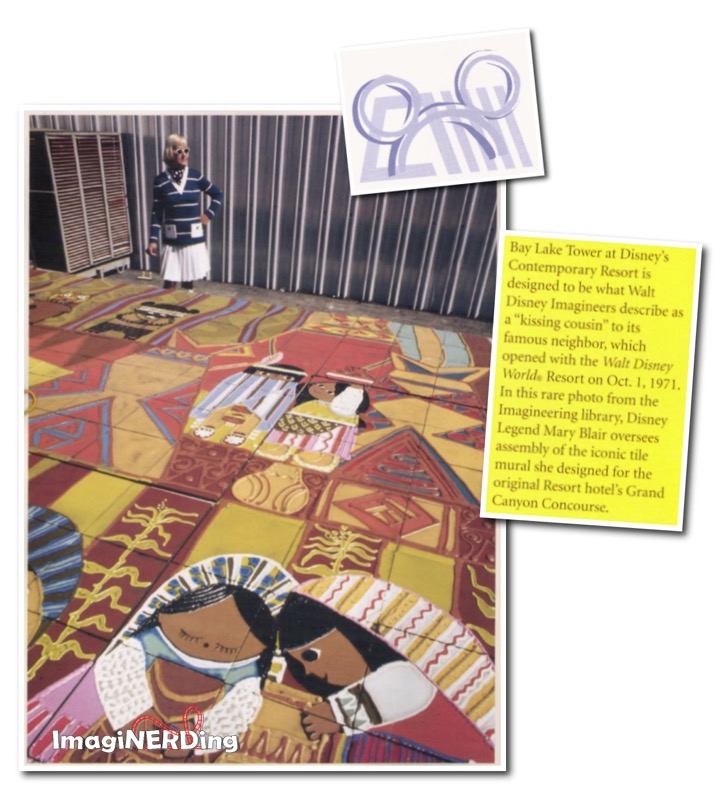 The mural and concourse colors are keyed to the earth and sky tones of the Grand Canyon as well as the vibrant colors commonly used in Indian art. The glazes used on the ceramics are both mineral and chemical based; the color pink is made partially from gold.

Using a full-scale paper model of the mural, tile setters, working in sections, used high-rise lifts and scaffolds to mount the tiles. A 54-ton jigsaw puzzle, the nine-story mural took more than two months to assemble; the complete creative process took more than a year and a half.

What Do You Think About These Two Murals at Disney World?

FTC Disclosure: A copy was provided by the company for the purpose of a review. This post contains affiliate links, which means that ImagiNERDing receives a percentage of sales purchased through links on this site. Thank you for your support!