300 Feet Above the Contemporary Resort

The Disney News: Official Magazine for Magic Kingdom Club Families from Summer 1973 boasts a fantastic cover image of a 300 foot high view of Bay Lake and the Contemporary Resort. 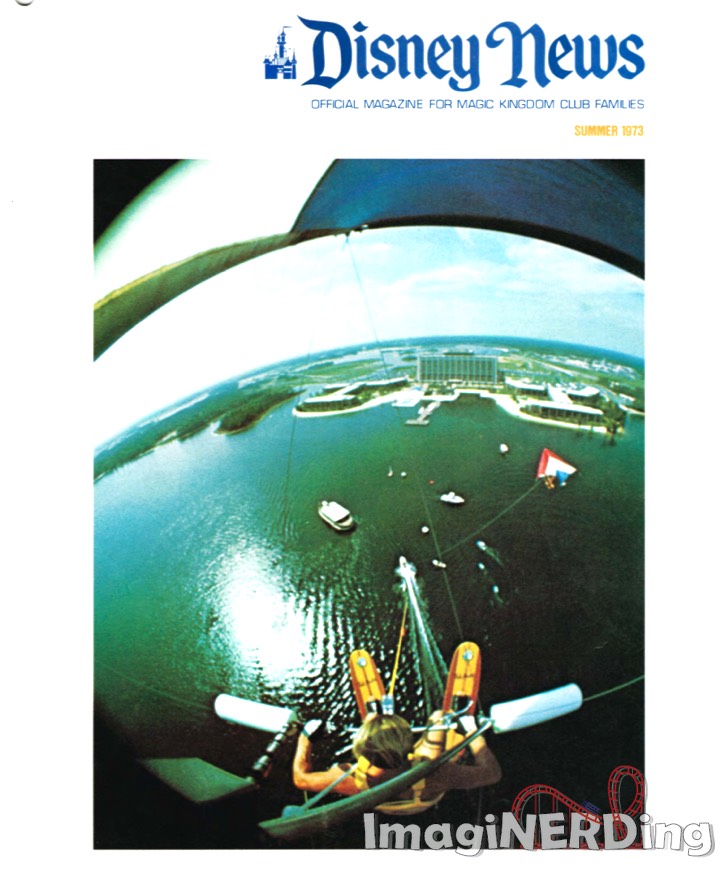 COVER STORY: The excitement of soaring some 300 feet above Walt Disney World with the daring kite fliers in the Water Ski Show was cap­tured by a camera with a special lens mounted on a flier’s kite. The kite­ height view of the Contemporary Resort is unique and, the kite fliers tell us, so is the sensation of sailing through the skies on skis.

The Wonderful World of Water was a ski show that debuted on the Seven Seas Lagoon for the summer of 1973. It was based on the previous summer’s show: Walt Disney World Water Ski Spectacular. The show borrowed heavily from the Cypress Gardens show barely an hour away. Of course, Disney built upon the idea and added characters and other items to make it uniquely Disney.

The Disney News article focuses on the show and has an interesting segment on the flex wing kites that were used in the show. These were relatively new to American audiences.

About the Flex Wing Kites

Although all members of the water ski show exercise extreme caution at all times, the skiers who slip into the harnesses of the giant, flare-equipped flex-wing kites and soar 300 feet over the waters of the Seven Seas Lagoon never overlook one before, during, or after their flight.

Introduced into this country from Australia several years ago, the flex­ wing or delta-wing kites rapidly have become the most spectacular event in every water ski show-where there are experts who can fly them. And where there are drivers with the skill to tow them.

“Naturally, there is an element of what I like to call ‘controlled danger’ in every flight,” said one kite flier. “But that is true of everything – even driving a car on a highway. Flying the kites takes experience, maturity, and good judgment.

“For example, in our show we are an integral part of the ‘circus’ num­ber – I mean, the other flier and my­ self are the ‘daring young men on the flying trapeze.’ Of course, we are soaring over the ‘Vacation Kingdom’ with wings and not trapezes, but our performance requires the same de­gree of skill, caution, and expertise demanded of any specialty act. As performers, we try to entertain the audience without taking unnecessary chances.

“If I had any advice to give the novice flier, it would be: take every possible precaution, be prepared for every emergency, and,” he smiled, “relax and enjoy the trip – it’s the only way to fly a kite.”

Did you ever experience any of the water ski shows at Walt Disney World?