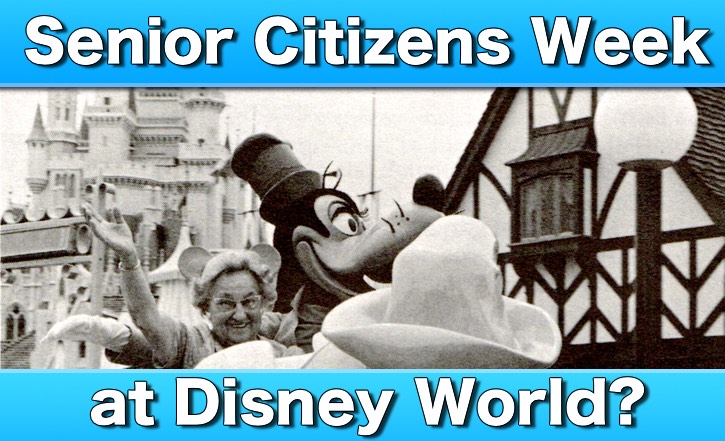 The May, 1973, Walt Disney World News shared information about events happening in the Magic Kingdom during the month of May.

Yes, from Monday, May 9, 1973 through Sunday, May 13, 1972, the Magic Kingdom featured Senior Citizens Week! (Also notice that the Magic Kingdom operating hours were 9 a.m. to 8 p.m. until Memorial Day weekend. Think about: no extra magic hours or VIP events!

What was Senior Citizens Week? Read on!

Special Events, New Attractions Await You In The Magic Kingdom

May days are special fun days at Walt Disney World, so you couldn’t have picked a better time to enjoy the Vacation Kingdom. There’s a new World of entertainment spectaculars for May, topped by the Grand Openings of two brand new Magic Kingdom attractions.

The excitement begins May 7-13, when the Magic Kingdom rolls out the red carpet to those guests 55 and over during Senior Citizens Week. Seniors …and everyone…will be sure to enjoy special daily band concerts, plus a great Salute From Youth, presented by the Pittsburgh Youth Symphony Orchestra on Sunday, May 13 at 2 pm in the Forecourt of Cinderella Castle.

In case you were wondering, the two brand new Magic Kingdom attractions were the Walt Disney Story and Tom Sawyer Island. Both were new for 1973.

Also, the fact that senior citizens were able to purchase a single admission that included unlimited use of the Magic Kingdom attractions was interesting. Even before Disneyland opened in 1955, the ticket books were the standard in most amusement parks for experiencing the rides and attractions. In 1961, Six Flags Over Texas offered one of the first Pay-One-Price models that is the standard for today.

The $4.95 senior ticket with unlimited use of all Magic Kingdom attractions was quite the bargain! Since there were no roller coasters (Space Mountain and Big Thunder Mountain Railroad) and most attractions were family-friendly, there were very few restrictions for senior citizens (not many attractions that had health warnings).

Do You Know Anything More About Senior Citizens Week at Disney?