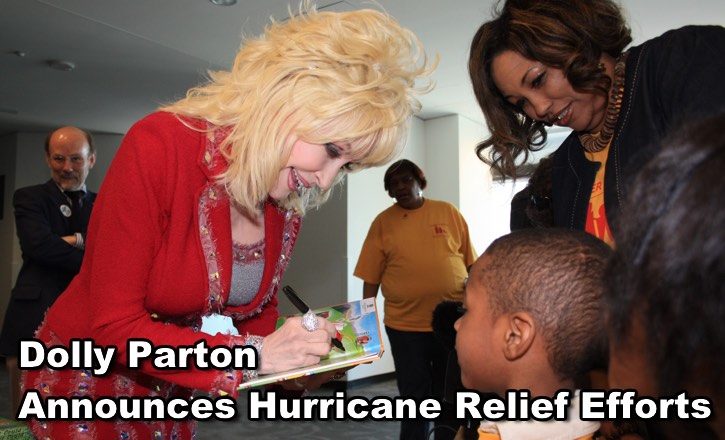 I’m a big supporter of Dolly Parton’s Imagination Library and not just because I’m a librarian. Getting books into the hands of young children is always important and is a positive way to reinforce reading and learning. Dolly is working through her Imagination Library to provide Hurricane Relief efforts. Check out the press release for more in formation.

Donation to be made via One America Appeal in addition to donating 500,000 children’s books.

PIGEON FORGE, Tennessee (October 18, 2017)- Today, Dolly Parton will assist with the ongoing relief efforts around the United States and its territories by making a contribution to the One America Appeal for Hurricane Relief to assist with immediate life sustaining needs of those affected. The One America Appeal is a joint appeal that was originally launched by all five living former American Presidents to encourage their fellow citizens to support recovery efforts from Hurricane Harvey. This special appeal has been expanded to include areas most affected by Hurricanes Irma and Maria. 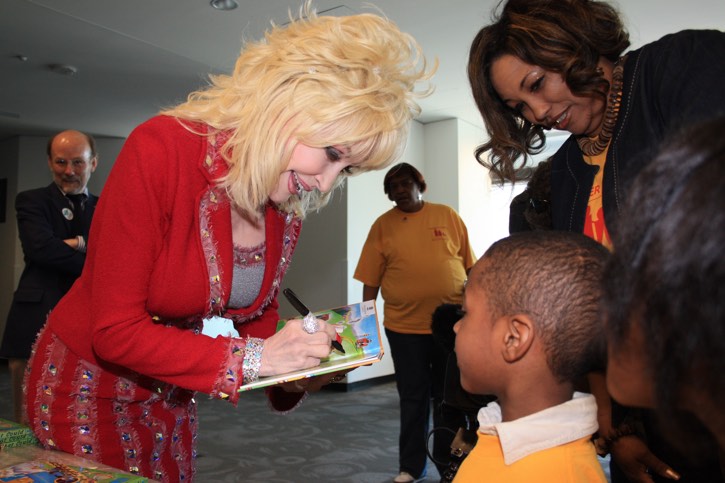 Dolly recalled “After the tremendous outpouring of support my hometown received last winter after the wildfires raged through the area, I want to do my part to help other areas affected by natural disasters. I admire and respect this effort led by our Presidents so it is an honor for me to contribute to their work.”

In addition to the financial contribution to the One America Appeal, Dolly will launch a partnership with Dolly Parton’s Imagination Library, the nonprofit social enterprise First Book, and Penguin Young Readers to provide 500,000 books to hurricane-affected areas through the First Book National Book Bank. To kick off the campaign, Dolly’s foundation donated 165,000 books and the $90,750 needed to cover the shipping and handling charges to make books available quickly and at no cost to educators affected by the storms. From Hurricane Katrina to Hurricane Sandy to last year’s floods in Louisiana, First Book has distributed over 5 million books to families affected by disasters, in partnership with children’s book publishers, including a substantial book donation from Penguin Young Readers. Penguin Young Readers also partners with Dolly Parton’s Imagination Library and First Book to support their book gifting programs and other outreach efforts, with a special focus on getting books to children in times of natural disasters.

“I know in the immediate aftermath of a disaster books are not the first thing people need or miss. But I also know from our past experience that after some time has passed, families, schools and libraries are eager to replenish their shelves, and their hearts, with books. First Book asked us to join with them to get the right books in the right hands at the right time and we were pleased to do so”, said Dolly.

If you would like to learn more or donate to this effort—or if you work with a school or program affected by the storms—please visit http://bit.ly/hurricanebookrelief.

Schools and programs affected by the storms can sign up for free with First Book and will then receive information about how to request books; each book distribution will be allocated on a first-come, first-served basis.

Founded in 1995, Dolly Parton’s Imagination Library is a book gifting organization that has, to date, mailed nearly 100 million books to children in Australia, Canada, United Kingdom and the United States. Each month, the program currently mails a specially selected, high-quality, age-appropriate book to over 1 million registered children from birth until they start Kindergarten in participating communities. Thousands of local, sponsoring organizations provide funding and support to the program. Dolly envisioned creating a lifelong love of reading in children, preparing them for school and inspiring them to dream. Recent studies suggest participation in the Imagination Library is positively and significantly associated with higher measures of early language development. Penguin Random House is the exclusive publisher for Dolly Parton’s Imagination Library.

First Book transforms the lives of children in need. Through a sustainable, market-driven model, First Book is creating equal access to quality education—making everything from brand-new, high-quality books and educational resources, to sports equipment, winter coats, snacks, and more—affordable to its member network of more than 325,000 educators who exclusively serve kids in need. Since 1992, First Book has distributed more than 170 million books and educational resources to programs and schools serving children from low-income families in more than 30 countries. First Book currently reaches an average of 3 million children every year and supports more than one in four of the estimated 1.3 million classrooms and programs serving children in need. With an additional 1,000 educators joining each week, First Book is the largest and fastest-growing network of educators in North America exclusively serving kids in need.