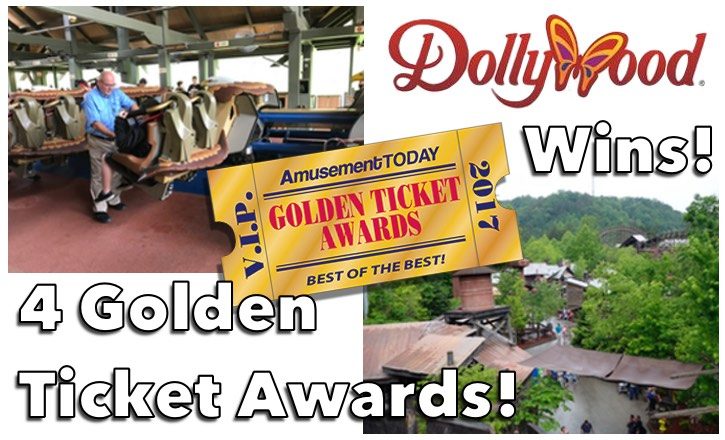 Dollywood just sent this press release detailing the four Golden Ticket Awards (as well as other awards) that the park just received. It’s quite a feat and I’m glad to see Dollywood recognized this way. I’ve been a fan of Dollywood since my first visit and I’ve just recently been chosen to be a Dollywood Insider.

Yes, it’s quite an honor to be chosen for this panel of fifteen people that are considered Dollywood Insiders. As a group, we love Dollywood and want to help people have an amazing visit. I don’t consider myself a mouthpiece; I have been writing about how much I love Dollywood for years. This is the opportunity for me to offer a grander focus on the Dollywood Resort.

PIGEON FORGE, Tenn. (Sunday, September 10, 2017)—The winningest park in Amusement Today’s Golden Tickets history, Dollywood again this year earned more category wins and finalist positions than any other park in the world. Dollywood picked up four “best of” awards and placed in the top-five in five additional categories during the magazine’s 2017 awards ceremony on Saturday, Sept.9 at Lake Compounce amusement park in Bristol, Connecticut.

“You all know how very proud I am of my Dollywood and the special folks who work there,” Dolly Parton said. “It makes me feel so good to know that our guests feel the same way about the park when they come visit us. It’s the perfect place to help them make those memories they’re always going to hold close. Our people do a great job of doin’ just what my mama always used to say—they treat our guests just like they’d want to be treated. And isn’t that what really makes the difference?

“Families can feel the love our folks have for them by the effort and attention they put in to every single detail of the park. They want to make sure every guest leaves with a smile on their face. Dollywood will continue to grow, but I’m thankful my team will never forget what got us to where we are:  going above and beyond to give our guests experiences they’ll always remember.”

“It has been incredibly exciting to watch Dollywood — which was a relatively unknown contender when the Golden Ticket Awards started in 1998 — become this theme park industry powerhouse,” noted Tim Baldwin, Golden Ticket Awards Communications Coordinator for Amusement Today. “Dollywood not only places as a finalist in more categories than any other park, it has taken top prize in four categories — again, more than any other park. Dollywood is setting the bar, and other parks would be wise to look at their example. It’s certainly a park to watch.”

Calculated from an international poll conducted by Amusement Today, the industry’s leading trade publication, the Golden Ticket Awards are the results of a detailed survey sent to a database of experienced and well-traveled amusement park fans around the world in balanced geographical regions. Voters are asked to rate the “best” in a number of categories such as best parks, roller coasters, water rides, shows, kids’ area, landscaping and Christmas events.

“Dollywood is the whole package — great food, entertaining shows, friendly hospitality and great rides,” Baldwin continued. “It’s little surprise to see them capture the attention of our voters. Each year, our selected panel has an incredible amount of worldwide experience, so to be honored on a worldwide scale in so many categories is an amazing accomplishment.”

The Golden Ticket Awards are the most sought after awards in the business of amusements and attractions. The awards have become the subject of much discussion by park aficionados the world over and garnered mentions in such notable media outlets as USA Today and the Chicago Tribune, and by the late radio newsman Paul Harvey. The awards also were the topic of a one-hour Travel Channel documentary. 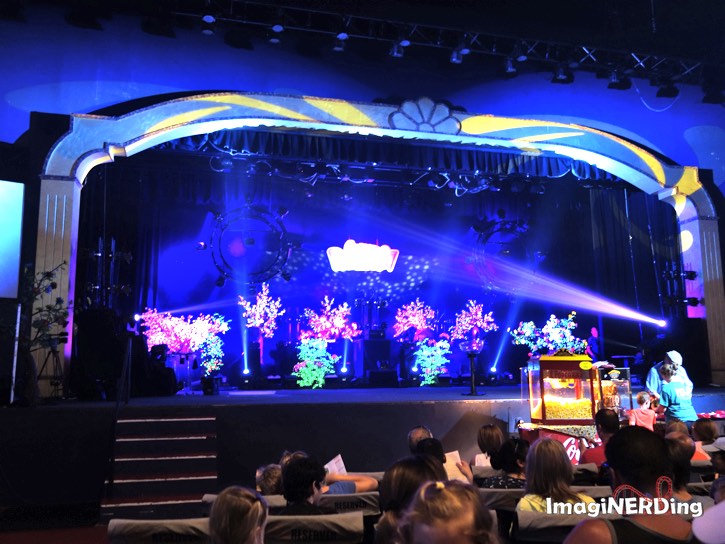 This season has been a banner year for the Pigeon Forge attraction. Dollywood was recognized as the third best theme park in the country by voters in USA Today’s 10Best contest, while Dollywood’s Splash Country was recognized as the eighth best water park. The National Amusement Park Historical Association also named Dollywood as their “Favorite Theme Park” this year. Dollywood edged Walt Disney World for first, a position the Florida attraction had held for thirteen consecutive years. The NAPHA also honored Dollywood’s Smoky Mountain Christmas as their “Favorite Post-Summer Season Amusement Park Event.” Fox News recognized the park as the top Small Town Theme Park thanks to its location in the foothills of the Smokies.

For more information about how families can celebrate Dollywood’s Year of the Family, visit www.dollywood.com or call 1-800-DOLLYWOOD

About The Dollywood Company:   A highly-awarded and widely-recognized leader in the amusement industry, The Dollywood Company consists of the 150-acre Dollywood theme park; the 35-acre Dollywood’s Splash Country; Dollywood’s DreamMore Resort; and Dollywood’s Smoky Mountain Cabins. As unique as its namesake and owner Dolly Parton, Dollywood is the 2010 Applause Award winner, the theme park industry’s highest accolade; winner of more than 30 Golden Ticket Awards; and recipient of 26 Brass Ring Awards for Live Entertainment (more than any other theme park in the world). In 2014, Dollywood was named a top three US theme park by USA Today and TripAdvisor recognized Dollywood as a top 20 worldwide theme park in 2015. Dollywood is open nine months a year (late March through early January) and offers rides and attractions, shows, and a dozen crafters authentic to the East Tennessee region.  Dollywood’s Splash Country, recognized by the Travel Channel as one of the country’s most beautiful waterparks and named 2009’s Must-See Waterpark by the International Association of Amusement Parks & Attractions, operates from mid-May to Labor Day. The 300-room Dollywood’s DreamMore Resort provides guests spectacular mountain views and family-friendly amenities next door to Dollywood theme park and Dollywood’s Splash Country. Dollywood’s Smoky Mountain Cabins offers luxurious cabin accommodations overlooking Dollywood. For more information, call 1-800-DOLLYWOOD or visit dollywood.com. Operating days and hours vary.