Iron Man The Gauntlet by Eoin Colfer, a book review

Iron Man The Gauntlet by Eoin Colfer is another entry in Marvel’s young adult series. I’ve reviewed (and loved) the Black Widow series. When I found out Colfer was writing an entry about Iron Man, I was excited. Colfer should be swell-known name to ImagiNERDs—I’ve both loved his Artemis Fowl and WARP series. Colfer’s style is engaging, witty and, at times, sarcastic. I knew Colfer would be a great person to tackle Iron Man and Tony Stark.

Iron Man The Gauntlet straddles the Marvel Cinematic Universe and the comic books. It’s a great tie-in for both genres and will satisfy fans of the films, comic and cartoons. There’s no direct correlation to the films, but it’s a perfect addition. Fans and newcomers will learn quite a bit about Iron Man. 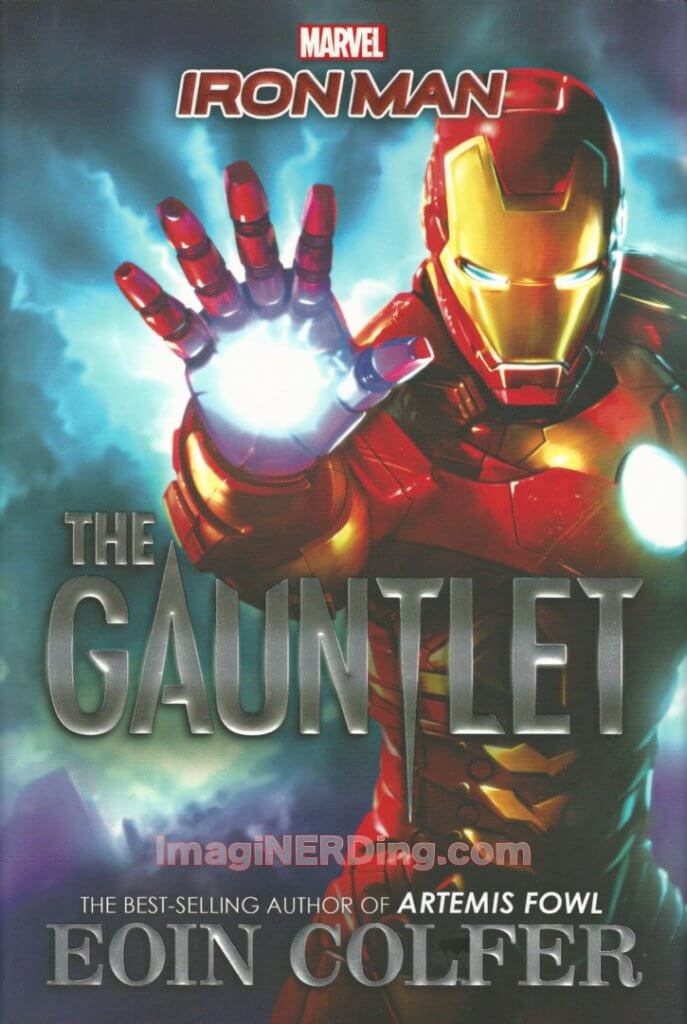 In Iron Man The Gauntlet, Colfer takes us into Tony’s past and we see a principal interaction between Tony and his father that sets Tony on a more altruistic path. Again, Colfer’s experience writing young adult and tween novels helps him build very believable characters.

Fans of Iron Man tech are going to love the book, especially the moments when Tony is backed into a corner and has to make due with partial suits and equipment. Friday, Iron Man’s artificial intelligence, and Tony Stark’s RoboTony (which does a lot of Tony’s yacht appearances when Iron Man is on a covert mission) both play a large part of the story and act as comic foils.

The gist of the story is that Tony is scheduled to make an appearance at an environmental conference in Ireland. Tony’s yacht, piloted by the RoboTony while the real Tony was on a mission, makes it’s way to Ireland. The yacht is pretty impressive and fans will love getting an inside peak at it. Tony decides to take his party pack suit, which is used for PR and public appearances. While he’s flying to the summit, he gets. ping on a boat on a deserted island. He decides to investigate it and that’s when the surprises happen.

One of the characters that helps ground the book in the teen  world is Saoirse Tory, a young Irish woman who ends up becoming the hero of the story.

Overall, there’s a lot of well-written action scenes in the book, which is expected since it is a superhero novel. But Colfer does take us deeper into Tony’s psyche as well as that of Saoirse. Yes, there is some teen angst, but all of the characters’ emotions lead to a deeper story. As intoned, there are times when Tony is backed into a corner without his suit or with a less powerful suit. We see Tony and Saoirse really depend on their intellects. The villain of the book is different from the movies (he is in one of the Iron Man films) and aligns closely with the comics. He’s drawn very well and an obvious villain to Tony as a hero.

Fans of Iron Man are going to love the book, especially the look at a few of the suits and how they function. If you’re new to the Iron Man universe, Colfer does a great job of bringing you up to speed and not leaving anyone behind.

Iron man The Gauntlet by Eoin Colfer is a wonderful read and I highly recommend it, along with the Black Widow books.

Have you read Iron Man The Gauntlet?