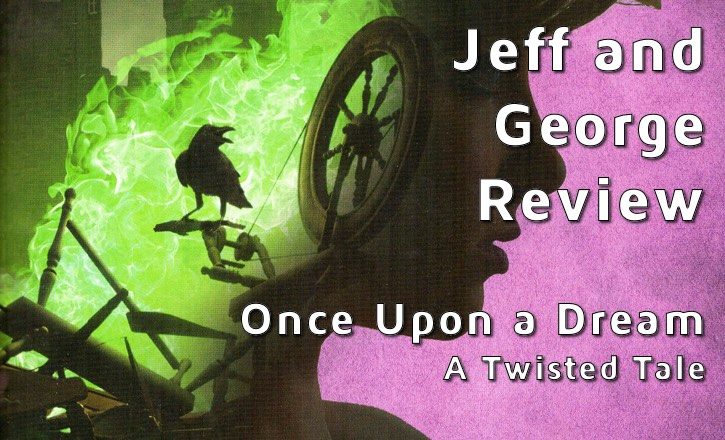 Once Upon a Dream: A Twisted Tale by Liz Braswell

What if the Sleeping Beauty never woke up?

George: Once Upon a Dream: A Twisted Tale is more than just a re-telling of Sleeping Beauty. The animated film has had a couple of re-tellings over the past few years, especially by Disney. We reviewed Liz Bradwell’s A Whole New World (Twisted Tales #1) and we loved how she took the story in a different direction. The premise of the Twisted Tales series is that the author takes a beloved animated film from Disney and re-imagines it–as if something different might have happened.

Jeff: The first book in the series followed Aladdin’s tale to a T for the first quarter, before veering wildly off the path. This go-round tells Sleeping Beauty’s tale different right from the first page. Instead of starting at the beginning, the book begins with the question: “What if Sleeping Beauty never woke up?”

George: Once Upon a Dream: A Twisted Tale is a very interesting way to re-boot the story, but I still found myself wandering (and wondering) during the first part of the book. It didn’t make enough sense until a pivotal plot point was explained, that, theoretically, could have happened during the final moments of the animated film Sleeping Beauty. From there, it was a very Matrix-like point…or sort of like an Inception-like dream.

Jeff: It WAS a bit of a confused story, as George mentioned. I would have been better off NOT reading the book’s description at first, and just taking it all in, before the reveal happened. That said, the first part of the book was an interesting peek into what life would be like with Maleficent in charge…

George: And that’s where the twist comes in. It’s not the same world we saw at the end of the movie and it takes some time for us to piece it together. Once the action really started though, the book picked up speed and was much more enjoyable. There’s a lot of dream within a dream to the story and, in hindsight, it pays off more than I thought. Still, it’s not for everyone, though.

Jeff: I had the opposite reaction of George, though. While confusing, I did enjoy the first half of the book more. The second half just seemed like a series of action pieces, relaying the same information again and again to fill the page count before the final battle. I started to get bored, and anxious for the end to arrive.

George: And you didn’t just skip ahead?

Jeff: You know me. I’d feel bad, and then I would think the book is mad at me for skipping, so I stuck it out!

George: Good point. I have to admit that the Aladdin book confused me, too, since I was really expecting a similar story. And I wasn’t prepared for the darkness. The Sleeping Beauty book never seemed to be as dark, although some pretty devastating things happen. It does lead us into a different ending from the film, that’s a little meatier than expected.

Jeff: This re-telling wasn’t as drastically different as Aladdin was. Aladdin took the normal story, waited until a quarter of the way through, and then told a completely different tale. With this one, everything in the movie happened, up until the last 2 minutes…it’s more an extension than anything else! But, it does add some new twists and turns into the mix, and changes it up a bit.

George: Overall, we both enjoyed Once Upon a Dream, but it wasn’t as interesting as A Whole New World. It’s written more for teens and some of the violence might not be appropriate for tweens and younger. Adults enamored with Sleeping Beauty and Maleficent are going to enjoy the Twisted Tale, especially when they get to put the story together.

Jeff: I agree. If you just let yourself go with the flow, you’ll find an enjoyable take on Sleeping Beauty’s tale, with some new things to think about the story with along the way.

Have you read Once Upon a Dream: A Twisted Tale by Liz Braswell?