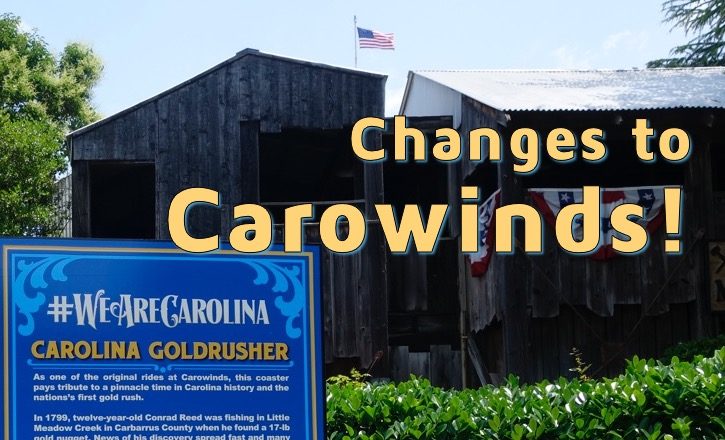 I noticed a few changes at Carowinds on my last visit. It was a beautiful day with surprisingly minimal crowds. I noticed a few of the restaurants had been remodeled on the outside and some additional signage relating the history of the Carolina’s theme park. Read on to see the changes!

I snapped this first shot of Papa Luigi’s Pizza in the Spring of 2015. This location was called Showcase Pizza in 1999. Papa Luigi’s is in the Carolina Showplace section (on your way to Fury 325 from the main entrance).

The following two photos show a new color scheme, marquee, lights and awning. I do love the new color scheme. It seemed more like a Tuscan-feel with the muted browns and yellows. Of course, you can’t deny an eatery with a view of Fury 325. I wonder if this is part of a change for the area with the Cirque stage show debuting soon. 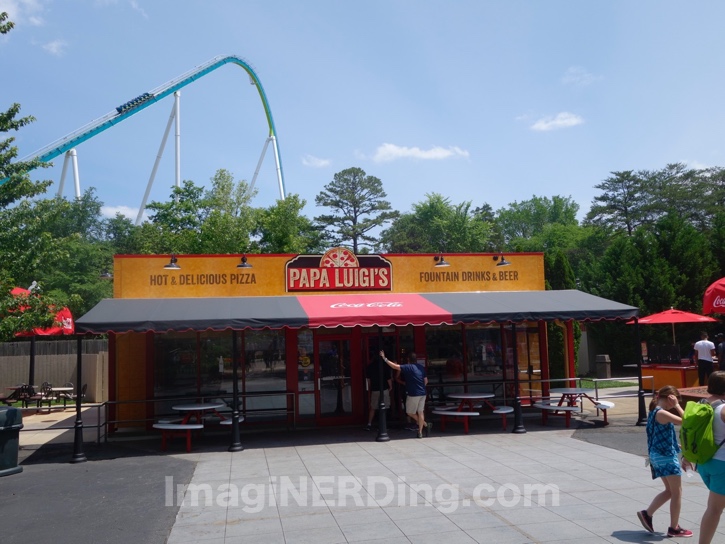 A close-up view of one of the changes at Carowinds that I noticed over the weekend. The lettering is new and offers an idea of what’s inside. It also looks like the Pizza part of the name was dropped. 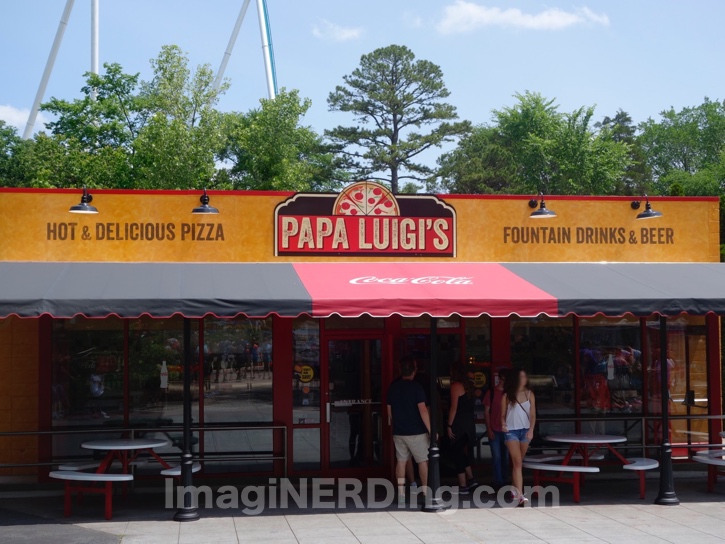 Changes at Carowinds: The Chicken Shack Becomes The Fry Shack

The image above was taken in 2015 of the Chicken Shack in the County Fair section of Carowinds. At the time, it offered a fairly extensive gluten-free menu option. While doing some research, this might have been a corn dog stand back in the late 1970s. 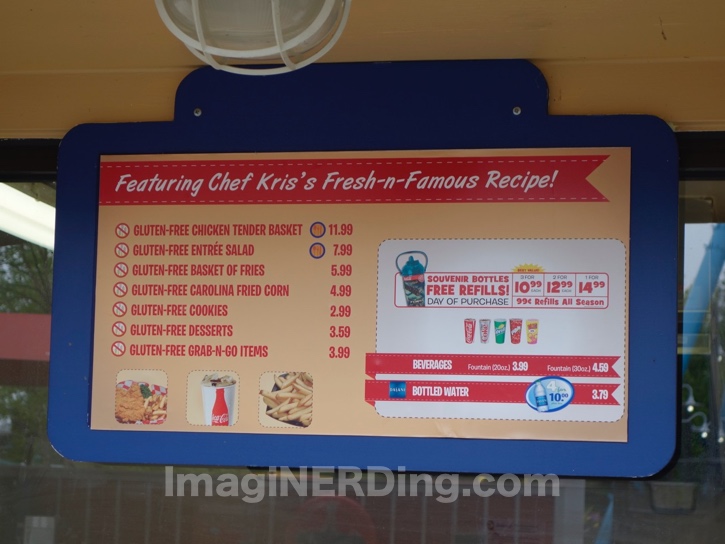 In the following images from 2016, you can see the changes to the building appear to be in name and signage, only. Still, the building looks fantastic! 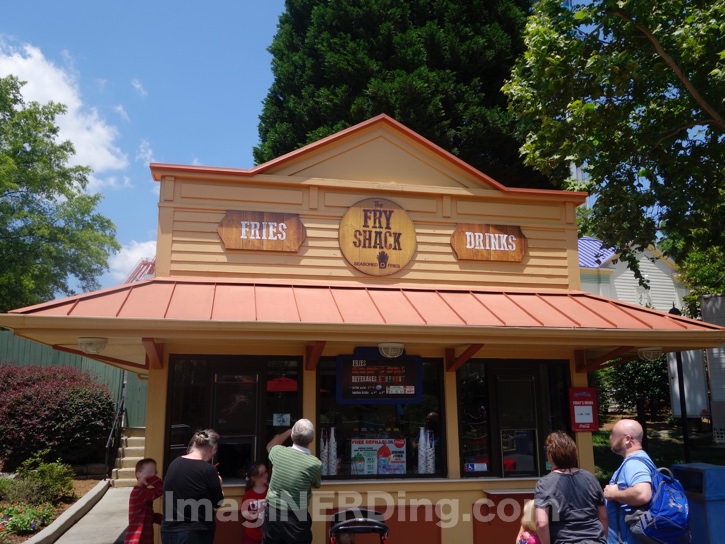 But the menu is very different! The chili cheese sidewinders and the two different sweet potatoes sound spectacular! 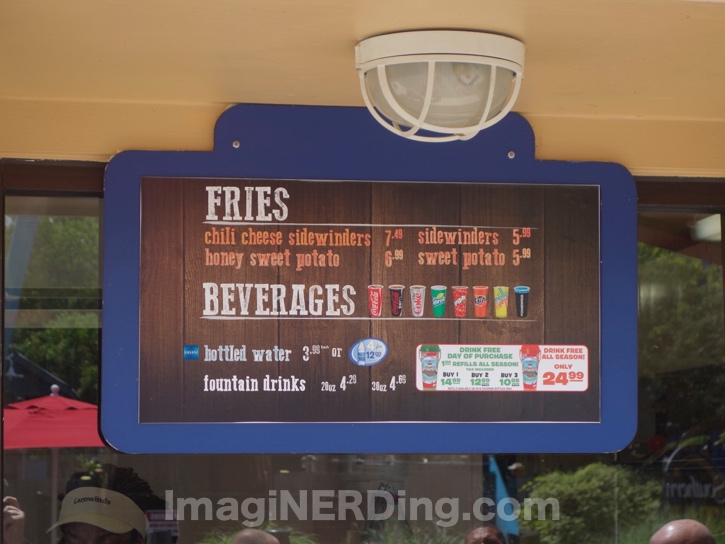 I can’t wait to try these out on my next visit. 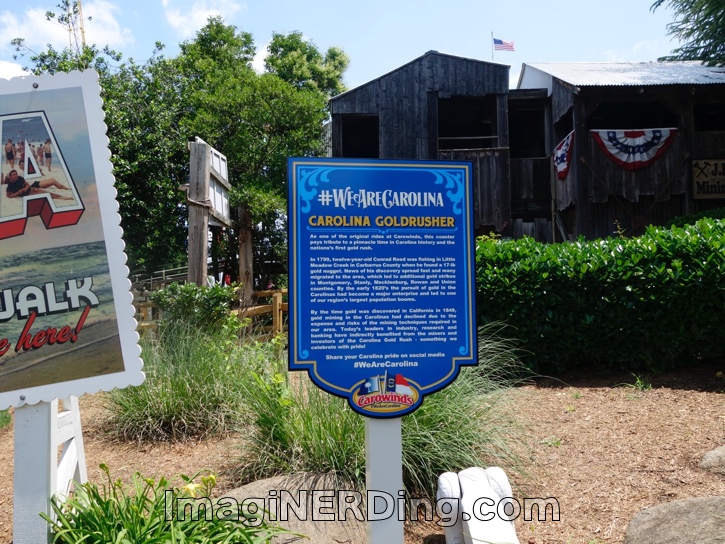 I ran across the first sign when I stopped to get a picture of the Carolina Boardwalk sign (on the left side of the image). The hashtag #WeAreCarolina is used at the top of the sign. It looks like they are historical markers, of sorts, with a history of the attraction and its significance. The one for Carolina Goldrusher mentions twelve year-old Conrad Reed who found a seventeen-pound gold nugget while fishing in Little Meadow Creek on his farm in Cabarrus County, NC and the goldrush that followed.

As one of the original rides at Carowinds, this coaster pays tribute to a pinnacle time in Carolina history and the nations’s first gold rush.

In 1799, twelve-year-old Conrad Reed was fishing in Little Meadow Creek in Carbarrus County when he found a 17-lb gold nugget. News of his discovery spread fast and many migrated to the area, which led to additional gold strikes in Montgomery, Stanly, Mecklenburg, Rowan and Union counties. By the early 1820’s the pursuit of gold in the Carolinas had become a major enterprise and led to one of our region’s largest population booms.

By the time gold was discovered in California in 1849, gold mining in the Carolinas had declined due to the expense and risks of the mining techniques required in our area. Today’s leaders in industry, research and banking have indirectly benefited from the miners and investors of the Carolina Gold Rush – something we celebrate with pride.

Harmony Hall has a long history at Carowinds, as well! 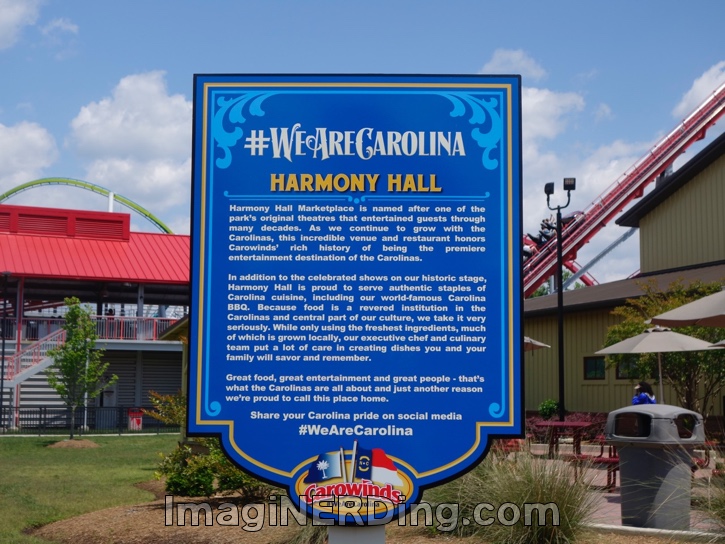 Harmony Hall Marketplace is named after one of the park’s original theatres that entertained guests through many decades. As we continue to grow with the Carolinas, this incredible venue and restaurant honors Carowinds’ rich history of being the premiere entertainment destination of the Carolinas.

In addition to the celebrated shows on our historic stage, Harmony Hall is proud to serve authentic staples of Carolina cuisine, including our world-famous Carolina BBQ. Because food is a revered institution in the Carolinas and central part of our culture, we take it very seriously. While only using the freshest ingredients, much of which is grown locally, our executive chef and culinary team put a lot of care in creating dishes you and your family will savor and remember

Great food, great entertainment and great people – that’s what the Carolinas are all about and just another reason we’re proud to call this place home.

Make sure to keep your eyes open to check out some of these changes at Carowinds. I can’t wait to see what they do next!