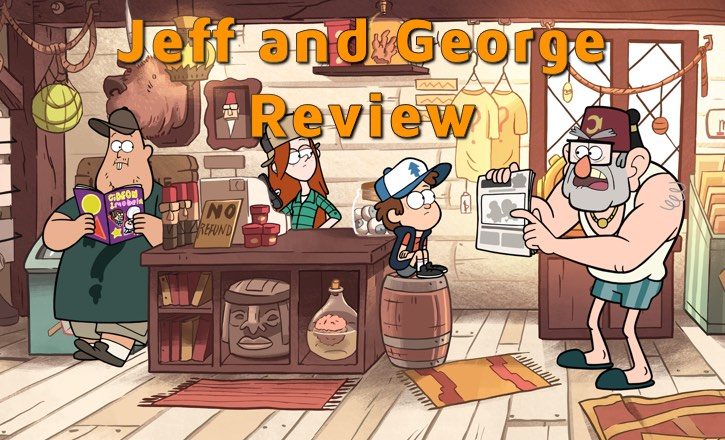 Gravity Falls: Six Strange Tales was originally released on DVD in October of 2013. JEff and George originally reviewed it on Communicore Weekly during the DVDs initial release.

George: Gravity Falls debuted on the Disney Channel in 2012 and seemed to be an unlikely hit. When Disney offered a review copy, I jumped on it, mainly because it’s a popular show with my boys. It’s been described as X-Files meets Eureka for kids. Gravity Falls is about Dipper and Mabel Pines, fraternal twins that are sent to spend the summer with their great uncle Stan (called Grunkle Stan). Grunkle Stan runs the Mystery Shack, a local museum/shop of the weird.

Jeff: I like your almost use of the term “museum of the weird,” George. Because that is exactly what the Mystery Shack is…a museum of weird stuff! Like George, I jumped on the chance to review this. I caught it when it premiered back in 2012, and have seen most of the episodes. The DVD set collects only six of the episodes from the series, but man, do I love it!

George: The transfer quality is good. I was surprised at a few points where the image pixelated. Not sure if it was my DVD copy or the transfer. The stories are a lot fun and hint at the amount of mysteries throughout the rest of the series and hopefully what will come. I’ve mentioned that it can be compared to X-Files with a comedic bent in the storytelling . The lead and ancillary characters are well thought out and play well in the confines of the story. Some of the antagonists are quite odd and reminded me a little of the characters from The Regular Show.

Jeff: I think it has the right combination of “normal” characters and “odd” ones, which help balance it out. While it may not be as consistently smart as Phineas & Ferb is, it certainly has a lot of charm and is quite hilarious. No, that wasn’t just your DVD, as I did see a bit of pixelization as well on mine, but that didn’t take away from my enjoyment of the episodes at all.

George: Sadly, there are only six episodes on the disc, which is half of the 2012 season. The episodes are: Tourist Trapped, the Legend of the Gobblewonker, Headhunters, the Hand that Rocks the Mabel, the Inconveniencing, Dipper VS. Manliness. I’m a little confused as to why Disney would release only six episodes except for the fact that they can get more money from more discs being sold. The main bonus was the inclusion of a mini Mystery Journal.

Jeff: Having a copy of Mystery Journal #3 was pretty cool, but I definitely would have liked the entire season on the disc. Even if not, some special features would have been great, too. The voice acting on this show is top notch, so maybe showing the actors in the studio recording would have been great. But again, even without that, I enjoyed the disc quite a bit…I just wish it was longer!

George: So, in some roundabout way, we’re both saying that we really love the show but we’re not too enthused about the Gravity Falls DVD release. I was surprised that the disc was pretty lackluster in the features section. There were a few Easter Eggs but they didn’t do much besides show a screen image or a character. It would have been pretty interesting to see a featurette about the origins of Gravity Falls or some of the mysteries.

Are you a fan of Gravity Falls? Are you going to purchase this one?