I’ve been wondering what the Plants VS Zombies Garden Warfare: 3Z Arena was going to look like. I have to admit that my video game loving boys are pretty excited about this one. Carowinds has shared some images of the arena and the motion-based seats. I just hope I don’t embarrass my kids!

CAROWINDS BECOMES THE BIGGEST, BADDEST BATTLE IN THE UNIVERSE

Charlotte, N.C. (March 23, 2016) – Carowinds and PopCap Games – creator of one of the world’s most beloved video game franchises, and an Electronic Arts (EA) studio – announce the biggest, baddest battle in the universe as the world’s first intra-active 3-D digital experience, Plants vs. Zombies™ Garden Warfare: 3Z Arena, debuts to the public on March 25.

This state-of-the-art attraction, designed exclusively for Carowinds, is based off the Plants vs. Zombies™ Garden Warfare franchise – a hilarious and over-the-top videogame series that includes the critically-acclaimed Plants vs. Zombies™ Garden Warfare 2, now available in stores and for digital download on Xbox One, the all in one games system from Microsoft, PlayStation®4 computer entertainment system, and Origin™ for PC.

The fate of the world hangs in the balance in Plants vs. Zombies™ Garden Warfare: 3Z Arena, as the evil genius Dr. Zomboss (the leader of the zombie horde) makes his newest attempt to collect all of the world’s brains. Having secretly overheard Crazy Dave, heroic horticulturalist and sometimes-brilliant nemesis, mention “golden gnomes”, Dr. Zomboss decides he must seize the mysterious power of the gnomes for himself via a challenge to Dave and the plants! Players will step into the biggest, baddest battle in the universe as Team Plants and Team Zombies go head-to-head in a quest to collect the most golden gnomes, while traveling through time and space, and theme parks.

“We are thrilled to bring the world’s first intra-active 3-D digital experience to the Carolinas,” said Brad Marcy, vice president and general manager, Carowinds. “With digital attractions becoming an increasingly popular part of the modern amusement park, partnering with a renowned electronic games company like EA makes great sense. Plants vs. Zombies™ Garden Warfare: 3Z Arena creates larger than life entertainment that our guests are sure to embrace.”

Players will mount up on one of the 68 motion-based seats, which rock forward and backward nearly eight degrees in each direction, all the while shooting from a hand-held laser device at a 14’6” x 26’ screen. 3-D glasses provide an enhanced reality and added effects for players. The stakes are high as the respective teams attempt to overtake their foes. Plants vs. Zombies™Garden Warfare: 3Z Arena is located in the newly renovated Action Theater in the County Fair section of the park. 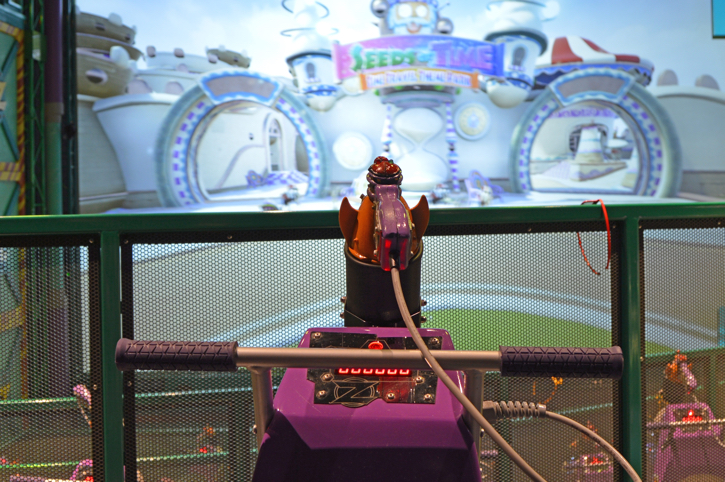 “Creating fun memories from unique moments is what the Plants vs. Zombies™ franchise is all about and the 3Z Arena is another way people will get to take part in the eternal struggle between the plants and zombies,” said Jeremy Vanhoozer, senior creative director, Plants vs. Zombies franchise. “We’re thrilled to partner with Carowinds, and can’t wait for people to dive into this innovative digital experience.”

Guests can experience this epic season with a 2016 Gold Season Pass that provides unlimited visits to Carowinds and the all-new Carolina Harbor Waterpark, as well as free parking, free admission to SCarowinds and more! They are currently available for as low as six easy payment of $16.50 at carowinds.com.

I’ve got my season pass to Carowinds and I’m super-excited to try out Plants vs. Zombies™ Garden Warfare: 3Z Arena! What about you?