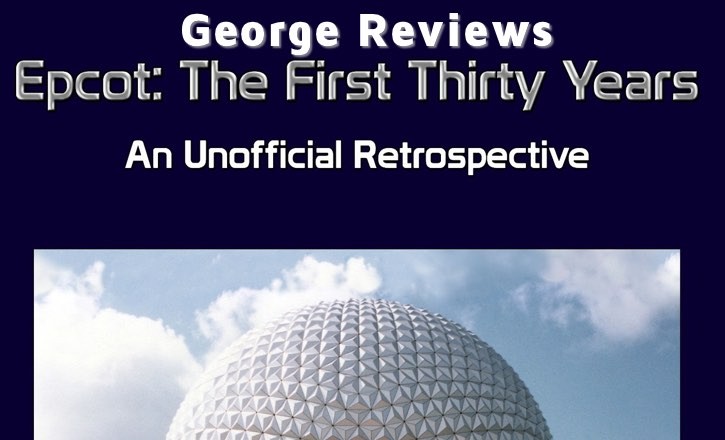 Epcot: The First Thirty Years, an Unofficial Retrospective by Jeff Lange and Kevin Yee was released in 2012. Any Disney historian knows how difficult it is to find photos of Walt Disney World from the 1970s and 1980s. Whether it was due to the temporal nature of the cameras and film from that period or the fact that most of the photos are still packed away in scrapbooks, there aren’t a lot of images for the first two decades of Walt Disney World. Disney struggled with promoting EPCOT Center in its first years. The initial offerings for parades was slim and there isn’t a lot published on them. So, any work related to the early days of the resort are welcome!

Jeff Lange and Kevin Yee are two of the bigger names in the Disney blogging/history community. Yee has written a multitude of Disney-related books; Jeff Lange is well known for his video compilations. When I heard that Yee and Lange were working together on a project about Epcot’s history, I was pretty excited!

Epcot: The First Thirty Years, An Unofficial Retrospective is 157 pages and clocks in with over 500 images. The book is self-published, which offers some advantages and disadvantages. The guys had to fund the book, so there are certain restrictions which relate to the final product. That being said, I really loved the book. Lange and Yee do a good job straddling the line between casual Disney fan and hardcore enthusiast. 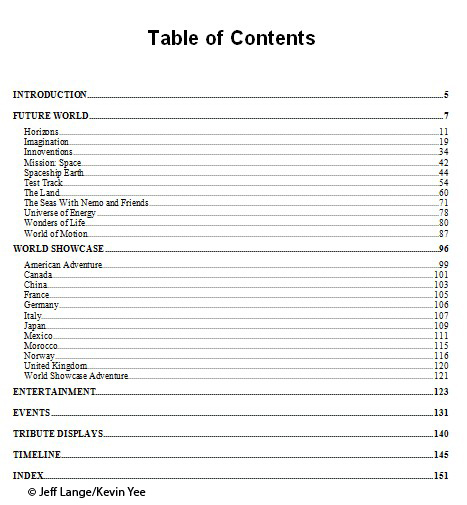 Any good book on the history of Epcot is going to have to be encyclopedic in nature. There have been a lot of changes over the past thirty years and many of the changes haven’t been well documented (if at all). The guys take a broad overview of the park and its pavilions. It’s enough to keep you reading and you are bound to learn a few things. Looking closely at the Table of Contents, you can see that some of the pavilions are better represented than others. Obviously, this is due to the amount of images they had at their disposal. Still, there has not been a definitive work on Epcot, but the Lange/Yee title does add a lot to the body of knowledge.

The expense comes from the 500 color photos in the book. It is really a treasure trove of photos that you won’t find in a lot of other places. Each page has between 3-5 photos or more and range from the early 1980s to more contemporary. Some of the photos are from home videos but the quality doesn’t suffer. It really is a great look at parts of Epcot that are long gone. My only complaint is that I wanted much larger images and more of them! Lange and Yee have presented a large number of their own personal photographs and therein lies the charm. Because Lange was prescient enough to videotape a lot of his early visits, we have stills from video of the early years of Epcot.

The text is limited, but the real reason to buy the book is for the images. There are some sections dedicated to the more obscure parts of Epcot history like Skyleidoscope, Surprise in the Skies and the Daredevil Circus Spectacular. There aren’t as many images of those on the net so it’s great to have a few photographic resources. You’ll spend a lot of time flipping the through the book reminiscing and thinking about the changes of Epcot. Plus, there is an image for the sign for Communicore West!

They’ve also included a timeline of Epcot Center history that starts in 1965 and ends at the 30th Anniversary Celebration. It’s a handy reference for attraction openings and closings. There is also a fairly in-depth index, too. I’m hard-pressed to pick out a favorite section since there are so many great photos of all of the pavilions, including a few construction photos and in-ride images. Although, I was surprised that there was no mention of the Ep-ity-cot celebration.

Have you read Epcot: The First Thirty Years? What did you think about it?