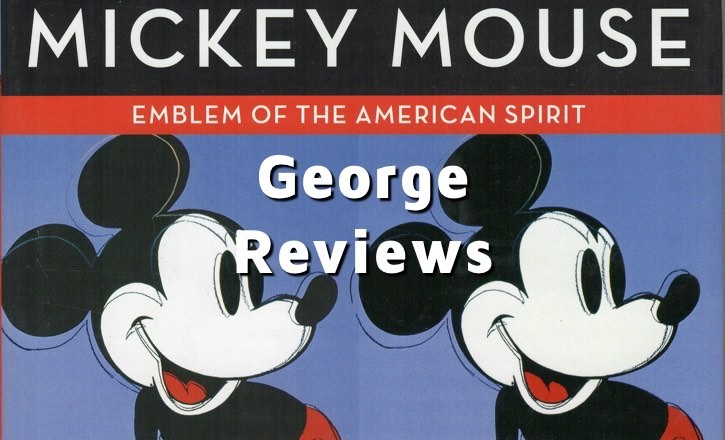 Mickey Mouse: Emblem of the American Spirit by Gary Apgar

Mickey Mouse: Emblem of the American Spirit is an incredibly fascinating and well researched title. The book has 336 pages and is full of illustrations and photographs chronicling the Mouse’s (and Disney’s) contribution to American culture. The first section looks at the birth of Mickey Mouse and actually goes through and posits for different scenarios based on the time and the history of the company that the actual company used to promote Mickey Mouse. It was quite fascinating for Apgar to recount the different stories of Mickey’s creation and to read how the stories changed and evolved based on the needs and direction of the company.

An Incredibly rich history unfolds that goes beyond what we’ve seen in the typical biographies of Walt Disney. Of course, it’s impossible to tell the story of Mickey Mouse without touching on Walt Disney. I was very pleased to see that Apgar was able to go as deep as he has, especially with the cooperation of the Walt Disney Family Museum.

Apgar shares a lot of material on how Mickey was welcomed, so to speak, by the public. It’s hard for us to realize now how spectacular a creation that Mickey Mouse was, almost right from the get-go. We see things today like the Star Wars phenomenon and it’s hard to place Mickey in a similar context. But along with Charlie Charlie Chaplin, Mary Pickford and Douglas Fairbanks, Mickey Mouse truly  eclipsed them all. Sometimes it’s hard to put that in perspective. Apgar does a fantastic job with this aspect.

There were a lot of moments in the book that led me to think about the history of Mickey Mouse in a lot of different ways. Specifically saying how he was treated in the world as well as how the Disney Studios was treated artistically. Collectively, we see the mouse as a corporate entity but we have to remember in the late 1920s and 1930s, that he was one of the biggest stars on the planet and everybody wanted a piece of him.

Apgar discusses the merchandising of Mickey Mouse; it always interest me to compare that to what we see today with things like Star Wars, Marvel and other big properties. All of the marketing and merchandising seems today as just a way of making money. We have to remember that when Disney was doing it in the first decades of the 20th century, no one was marking on that scale.  It made a huge difference with the Disney company bottom line as well as with several other companies. It saved a lot of them from bankruptcy.

The last sections of the book were the hardest for me to get through, simply because of the subject matter. Mickey as seen through the eyes of art and by cultural critics was fascinating but very heavy. There was nothing wrong with Apgar’s writing or his style, but I just didn’t have the same level of interest in those sections. Or the same level of knowledge of post modern art. Or art. I could fully grasp Apgar’s intentions in those sections, but I found myself spending time outside of the book learning about other artists and styles. If you have a vested interest in those areas, then you’re going to find Mickey Mouse: Emblem of the American Spirit a true treasure trove.

Still, this is a book that is going to stand the test of time and sets the bar very high for academic work on Disney and the Disney Company. It’s really incredibly impressive and offers a level of research that we rarely see. The first third or so of the book is fascinating and is more than worth the price. The study of Mickey’s origins based on research versus what was promoted (and changed) through the years is undeniably fascinating. If you have an interest in Mickey as art or how he was seen culturally in the latter half of the 20th century, then you really need to pick up this book!

Have you read Mickey Mouse: Emblem of the American Spirit by Gary Apgar? Are you going to add it to your collection?