Mary Poppins was released on blu-ray in 2013 to celebrate the 50th anniversary. Jeff and George reviewed the blu-ray during its initial release on Communicore Weekly (the Greatest Online Show™). Enjoy this retro-review!

George: Mary Poppins, one of the most-beloved films of all time, especially from the Disney Studios, is finally on blu-ray. Just in time for its 50th anniversary and to help cross-promote the new film, Saving Mr. Banks, everyone’s favorite nanny is back. A film like Mary Poppins is hard to review because it’s so spectacular, so I’ll think we’ll focus on the blu-ray and the many reasons this film is a must have. For starters, my kids (15 and 10) had not seen it previously and resisted based on the title. I used my dad powers and told them this was a film that everyone should see. Suffice it to say, they were both singing the songs anytime we paused the blu-ray.

Jeff: How can you even describe Mary Poppins, except for practically perfect in every way? Unlike George’s uncultured children, my 10 year has seen the film many times, and loves it. He was super excited when it came in the mail, and couldn’t wait to watch it again. Of course, the film is wonderful, but what really makes this a stand out is the fact that it looks fantastic on blu-ray.

George: Uncultured? More like too busy playing MineCraft and the latest FPS. But I digress. The film looks spectacular and sounds even better on blu-ray. My mom took us to see Mary Poppins at a drive-in at some point in the late 1970s and I remember her telling us that this is a movie that is amazing and that everyone needs to see. Of course, any Disney fan should own this on DVD already and be intimately familiar with the music, Disregarding the extras on the blu-ray, having a hi-definition/Dolby 7.1 mix is more than reason enough to buy this. 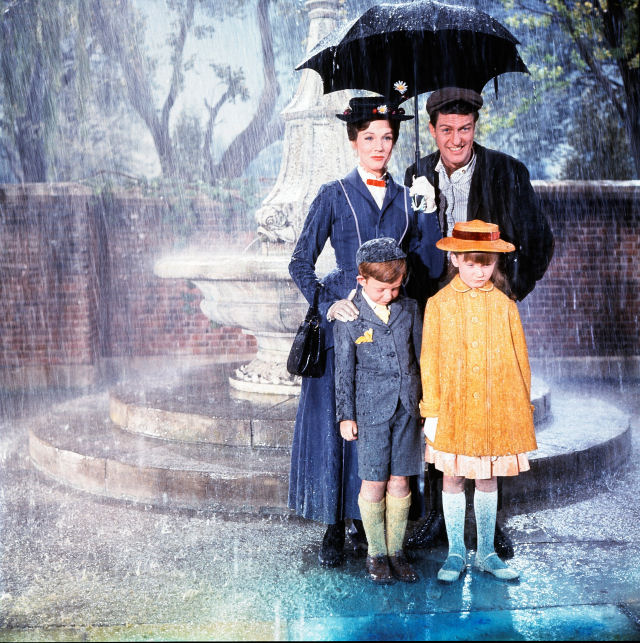 Jeff: This release is, by far the best the movie has ever looked for a home release. We’ve complained in the past about the color of recent Disney blu-ray transfers, but man, they really hit it right this time. The flesh tones look right! And what can I say about the “Jolly Holiday” sequence, other than the animation boasts beautifully saturated hues which stun but don’t bloom. It looks GORGEOUS, guys. For serious.

George: There are two major extras that include Mary-Oke’s and Becoming Mr. Sherman. Becoming Mr. Sherman is a wonderful look at how actor Jason Schwarzman became and learned from Richard Sherman. It’s another inside look at Saving Mr. Banks and makes me want to see the new film even more.

Jeff: Mary-Oke makes my karaoke heart sing! You can sing along to “A Spoonful of Sugar,” “Supercalifragilisticexpialidocious,” “Step in Time” and “Chim Chim Cher-ee”. And if you’ve read past reviews, you know how much I love karaoke! The rest of the features were ported over from the last DVD release. However, they are still comprehensive at looking at the making of the film and the Broadway show.

George: Still, I come back to the fact that Mary Poppins is considered Walt’s masterpiece, and by all rights is the Sherman Brothers’ masterpiece as well. The blu-ray is a fitting tribute and one of the best releases of the year (if we’d gotten review copies sooner, it would’ve made our best of 2013 list). The fact that I’ve caught my youngest singing the tunes throughout the day is a testament to the film; he still can’t pick out his favorite tune.

We know you’re going to add this one to your collection, right? What do you think about Mary Poppins being Walt Disney’s masterpiece?