Oz the Great and Powerful, a blu-ray review

Oz the Great and Powerful was released on blu-ray in July, 2013. Jeff and George originally reviewed it during the blu-ray release on Communicore Weekly. Check out this retro review!

George: Oz the Great and Powerful was released to theaters on March 8 of this year. It always surprises me when a film is released on blu-ray so quickly, but it’s an easier and more cost-effective way for the studio to capitalize on the release. I didn’t get the opportunity to see the film in the theaters, but it had definitely piqued my interests. With the blu-ray release slightly more than two months after the theatrical release, it felt like I didn’t need to see it in the theater. So, how does theblu-ray stack up?

Jeff: Well, first of all, I did actually see the film in theaters. I accidentally went to a 3D showing of it (I usually hate 3D films), but wound up really enjoying myself. I’m a big fan of the Oz property overall (the books, the original film, and so on), so I had very high hopes for this film. Plus, with James Franco starring and Sam Raimi directing, I thought it would be a home run. Sure enough, I wasn’t disappointed. 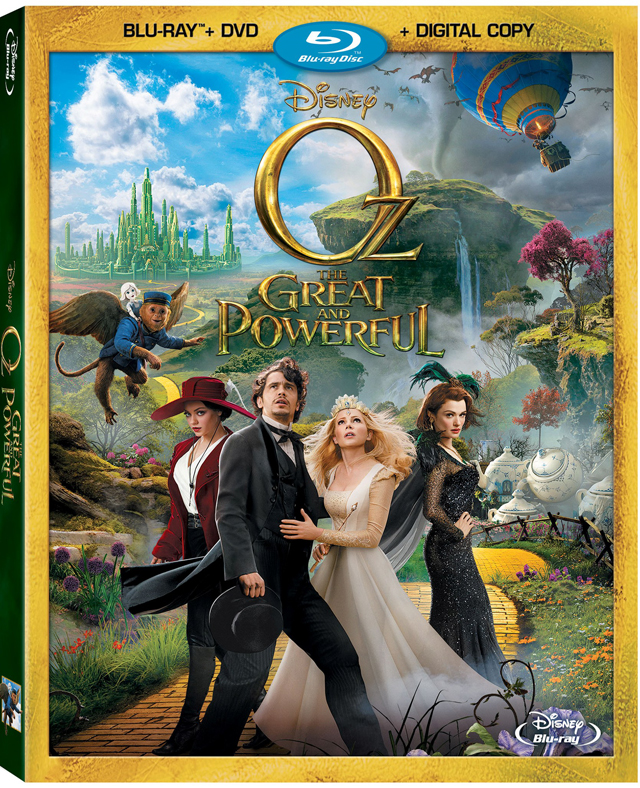 George: Oz the Great and Powerful is the story of Oz (Franco) and the three witches from the 1939 film. It’s sort of like a prequel, but nothing like the Star Wars prequels. I had kept away from spoilers and I was very interested to see how the story played out. I have to admit that the characters and story were all very well done and added a lot to the Oz mythos. It was interesting to watch the film with my kids who weren’t as aware of the Wizard of Oz and seeing how they missed some of the nuances and references to the 1939 classic.

Jeff: Nuances and references were a-plenty as well! However, you didn’t need to be a fan of the original film, or source material, to enjoy the film. It was there as a sort of extra. However, a lot of “a-ha!” moments filled the film, letting fans get some added insight to the classic story they love so much. The film itself, I thought, was very well done. It fleshed out a wonderful back story as to how the small time magician Oscar Diggs wound up being the great and powerful Oz. Very much a classic “fish-out-of-water” scenario, the story seemed to breath fresh life into an otherwise droll concept.

George: Agreed. One of my favorite moments was seeing the Wicked Witch of the West become the Wicked Witch of the West. Her story was touching, charming and tragic. Speaking of not tragic: the extras on this release are spectacular. I’m used to Disney doing half-baked releases with extras, but I was very surprised. One of my favorites was a documentary done by Franco in which he interviewed the cast and Raimi about how they came to Oz. It was fairly insightful.

Jeff: For a video diary that could have been a throw away, it was pretty dang interesting. Another one of my favorites is how the Wicked Witch of the West (no spoilers as to who it is if you haven’t seen the film yet!) was physically transformed into the evil, green witch we all know. For a special and practical effects junkie like me, it was pretty amazing to see how the transformation took place.

George: I was very surprised with the historical accuracy of the Walt Disney and the Road to Oz featurette. There’s been a lot of discussion about the attempts by Walt to procure the rights to and make various Oz-related productions over the years. Of course, Oz the Great and Powerful is touted as the realization of Walt’s dream regardless of his lack of involvement. The features, alone, make the disc a worthy addition to your collection.

Jeff: Probably my favorite extra on the disc is the interview with Danny Elfman, and getting his insights on the score of the film. But like George said, the extras along make the disc well worth the price, not to mention the fantastic movie attached to it. If you’re a fan of Oz, than this film is most definitely for you.

What did you think about Disney’s return to Oz? Did you see Oz the Great and Powerful?