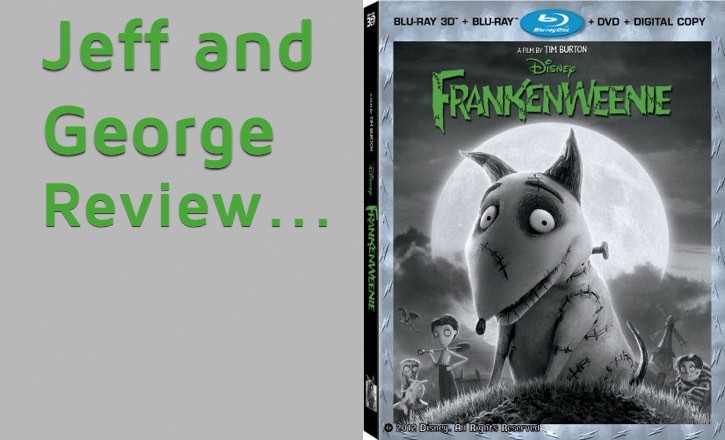 Frankenweenie on blu-ray, a review

Frankenweenie was originally reviewed by Jeff and George during its original blu-ray release on Communicore Weekly.

Jeff: Earlier this week, George and I both received our review copies of Tim Burton’s latest film, Frankenweenie. I missed out on seeing it in the theaters, and was excited to finally take a look at it. Having loved the original, live-action short film, I was anxious to see Burton return to the story and expand on it, this time in stop motion glory. About half-way through the movie, I abandoned these high hopes, and was left to wonder “What happened?”

George: I’m a fair-weather Tim Burton fan. When he is on (Beetlejuice, Sleepy Hollow), he is on. I didn’t see this film in the theaters since it honestly didn’t look as entertaining as I wanted it to be. Still, my youngest had a friend over and we microwaved some popcorn and settled in to watch the film. Within minutes, I realized that this is the same film that I’ve seen Tim Burton make over and over again.

Jeff: That seems to be a reoccurring trend lately: Burton re-making films that he has made over and over again. I like Burton’s early work a lot, but his more recent stuff is, quite frankly, uninspired. Which brings us back to Frankenweenie. To be blunt, it’s honestly an incredibly boring movie. So much so that halfway through, I turned to my fiancee to ask if she was enjoying it. Her response was an uninspired “No…we can turn it off.” But we both trudged through to the end of it for the sake of this review. Even more to the point, our ten year old, who will sit through almost anything, kept getting up to see “what everyone else is doing” throughout the film, because he was so bored. So where do we even begin with the problems with this film?

George: For starters, this was a great idea and was executed beautifully as a short film in 1984. The short is included in the set and might be the best part. Frankenweenie seems to get bogged down in developing characters that are out of place or not given enough exposition. My biggest issue is that the characters were, well, ugly. The characters in a Nightmare Before Christmas had appeal and were cute; the characters in Frankenweenie miss the mark totally. I really wanted Sparky to be adorable, even brought back to life, but he was kind of gross.

Jeff: I definitely feel as if the characters were wooden, and weren’t given much room to really be people we could relate to. They were just there. Their strange looks were the only thing we had to clue us into the fact that they were outsiders. On the flip side of that, though, I thought some of the voice acting was great. Martin Short (in multiple roles) and Martin Landau were fantastic. But sadly, they were not enough to carry the entire film.

George: Our final prognosis sounds like it’s going to be the same: get it if you’re a fan of Tim Burton or stop-motion animation. Otherwise, it’s not worth the time.

Jeff: Before we end the review, I really do think it’s worth mentioning a few things. The film takes a hard right turn into “What the hell just happened?” territory for its final act. It was sudden, unexpected, and to me, didn’t seem to jibe with the rest of the film. It just seemed like a big, flashy finale because they needed a “big” conflict to end the film on that came out of nowhere. Also, and this may be pushing it a bit, but I felt like one of the characters was overtly racist. Now, I’m definitely NOT the guy who looks for that kind of stuff, and I’d even go as far as saying I’m kind of “blue” every so often…but this character even made ME squirm a little bit. If you’ve seen the film, you know exactly who I’m talking about.

Did you get a chance to see Tim Burton’s Frankenweenie? What did you think about it?