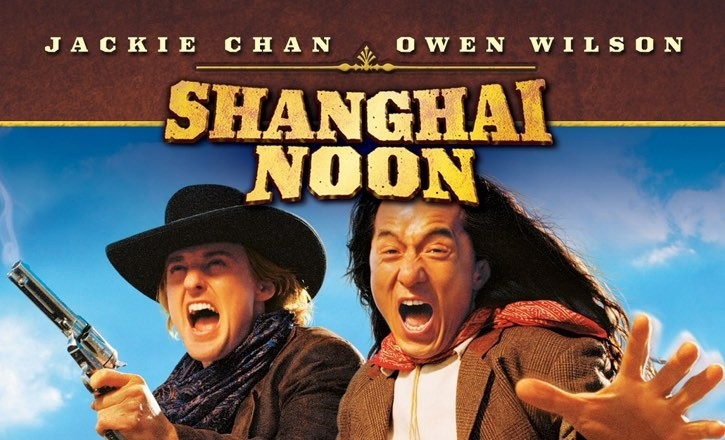 Released under the Touchstone label, Shanghai Noon and Shanghai Knights were released on blu-ray in 2013 (Jeff and George originally reviewed this combo on Communicore Weekly). But is it worth adding to your collection?

George: Originally released in 2000, Shangahi Noon turns out to be your typical fish out of water story. We first meet Jackie Chan, in the Imperial Guard, as he unwittingly witnesses the kidnapping of the princess. He travels with other Imperial Guards to America to help deliver the ransom. Along the way we run into Owen Wilson’s character who is obviously not the rogue outlaw that he pretends to be. As expected, hilarity ensues.

Jeff: I saw the movie when it first came out, and remember loving it. I was afraid it wasn’t going to hold up, even 13 short years later, but thankfully, it still does. At least to me, it did. I enjoyed it a lot, and really seems to feature Jackie Chan at the prime of his action / comedy years.

George: Owen Wilson should be familiar to most Disney fans simply because of his work as Lightning McQueen. He’s great at portraying half of the buddy formula that pervades a lot of his films. He’s a very competent actor with a great comedy style, but I still felt that I was watching the same character that we saw in the Cars series, Wedding Crashers and Zoolander. It suits the story with Jackie Chan, but I’d love to see Wilson stretch a little more. Of course, not many people can compare with Jackie Chan’s physical comedy and action choreography. As mentioned in one of the featurettes, Chan is a huge fan of Buster Kearton and it shows.

Jeff: I definitely agree. Their chemistry in the first film definitely make it a great buddy film. Owen and Jackie play off each other very well, and make for a likable team. That said, I feel the second film, Shanghai Knights, falls apart. I really feel like it tries too hard to replicate the success of the first film, but instead, falls flat. It has its moments of greatness, but not nearly enough to make it an enjoyable film overall.

George: Shanghai Knights was released in 2003 and, as Jeff mentions, tries to follow the successful formula of Shanghai Noon. The humor is more apparent and rich as Wilson and Chan work so well together, but it also felt like every plot twist was from the Dummies Guide to Screenwriting (not sure if this is a real book or not). Another odd part of the film is the love interests. Wilson’s love interest from the first film is gone and he is in New York living a pre-Gatsby life (sort of). A lot was unexplained for comedic timing but the issues weren’t totally resolved.

Jeff: It is a real book, and I have it. It’s like a how-to on how not to write a film! Moving on to the special features, it’s a mixed bag for me. There are the typical commentary tracks (two for the second film), which are just OK. The second film in particular seems to be very lacking, commentary-wise. The first was more enjoyable, if only because Owen Wilson livened it up a bit, while Jackie’s comments were edited in, and didn’t fit well. The best feature, though, is the “fight manual” for the second film, in which Jackie Chan explains how to shoot and edit a fight scene.

George: I was already thinking about adding some fight scenes to Communicore Weekly (the Greatest Online Show™).

Jeff: What is Jackie Chan doing these days? We might be able to get him to do the show…

What do you think about Shanghai Noon and Shanghai Knights?