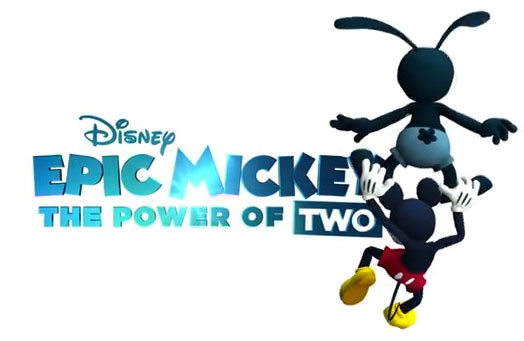 Epic Mickey: The Power of Two, a review

Epic Mickey: The Power of Two was one of the most anticipated games of 2012 and not just for Disney nerds but for gamers everywhere. The big difference for this release is that Mickey and the gang have finally made their way to the high definition consoles (Xbox 360 and Playstation 3). So, is this game worth trying out after three years? (Jeff and George originally reviewed this game on Communicore Weekly during its original release.)

George: Both of us loved Epic Mickey but we complained about the same issues as everyone else about the terrible camera and super hard levels. Both of us played review copies on the Xbox 360. So, how does Epic Mickey 2 stack up for us Disney nerds and gamers?

Jeff: Right off the bat, you’ll be able to tell that they were going for something different in this game. For starters, the characters now all have voices (which was sorely missed in the first game), and there is a new musical element. This was touted as a big feature when the game was being promoted, but unfortunately, the musical numbers, while fantastic, are few and far between. 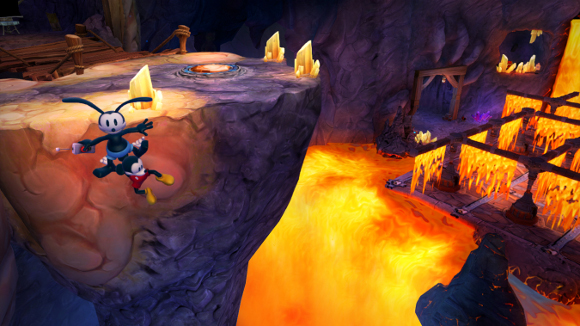 George: The music for Epic Mickey was very contagious and I agree that it is sorely missed. The musical numbers for the Mad Doctor in Epic Mickey Two were great and really reminded me of something from Doctor Horrible (you have watched Doctor Horrible, right?). This is probably a good place to mention the cut scenes, too. The animation was so much better in this game and there was a lot more. Junction Point was able to take advantage of the more powerful consoles and it really shows. So, how is the game play?

Jeff: The sequel handles much like the original when it comes to the game play. While the original was only for the Wii, and the Wii-motes made the painting mechanic a breeze, it was a bit more of a challenge on other console’s controllers. They talked at length about how they tried to fix a lot of the game play issues from the first game, and I will give them credit for doing that. But I still had a lot of issues with the camera at points. It often liked to center itself, at almost eye level, behind your character, making it difficult to see anything at all. I often found myself trying to adjust the camera, and wind up dying in the process.

George: Both of us played large portions of the game with our kids and found it challenging dealing with the AI of Oswald. There was lots of, um, loud talk between us and our kids about coming to one side of the screen to go through a door or needing to revive one of us when we died. The bosses seemed so unbalanced, too. One of the first incarnations of the final boss had me running to the interwebz to see how to beat him. I admit that the addition of the co-op play really extended the play time in a good way, but the game really seemed hung up on some tough play mechanics.

Jeff: I definitely agree. While I loved the addition of the much needed co-op mode (especially when they added another character), it was frustrating how much (or how little) we were able to do separately. Everything is very linear and by the book, with little to no time allowed for exploration. But that’s one of the high points of the game: exploring all of the cool, obscure, and lost Disney stuff that have packed into the levels.

George: For our readers, probably the best reason to get Epic Mickey 2 is for the layers and layers of nerdy Disney details that you’ll find everywhere. There are Hidden Mickeys (and Oswalds), images of collectibles as the landscape and tributes to the parks and films. As Jeff said, the game feels short and you needs to spend a lot of time doing the side quests when you first visit a land. There are collectible outfits, trading pins and more! I think we can both agree, though, that the best part of the game is the same as it was in the first Epic Mickey. 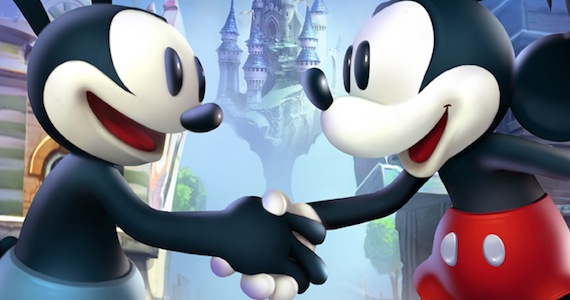 Jeff: Overall, from a gaming perspective, the game gets a solid C+. I think the reason we stuck with it for as long as we did is because of the Disney aspect. If it was any other game, I may have passed on beating it. But, wanting to see all the other layers of Disney history the game had hidden within it kept me going.

George: As much as I enjoyed playing the game with my son, there were many times when I stopped playing and had to take a break—mainly because I was frustrated with fighting the same mini-boss over and over. I still liked the game a lot and I think that most Disney fans will, too. Most non-gamers are going to find it challenging and a lot of kids are going to simply give up on it.

You can also hear us review Epic Mickey 2 with our sons on Communicore Weekly (the Greatest Online Show!™).

What did you think about Epic Mickey: The Power of Two?