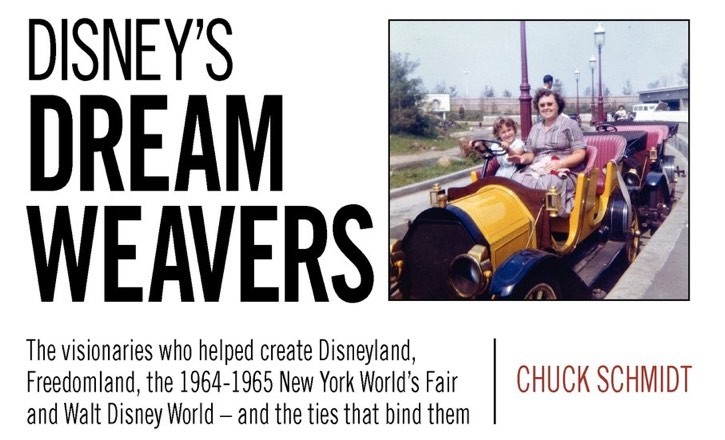 Disney’s Dream Weavers: The Visionaries Who Shaped Disneyland, Freedomland, the New York World’s Fair and Walt Disney World—and the ties that bind them by Chuck Schmidt, a book review

I knew that Disney’s Dream Weavers would focus heavily on a few individuals that worked on all four parks. It’s a very short list and the big names that come up are Van Arsdale France and C.V. Wood. Actually, Wood only worked at Disneyland and Freedomland; he’s one of the few individuals that Disney has actively removed from their corporate history. The book discusses this and it’s an interesting story if you haven’t heard it before.

The book is divided into four major sections covering the parks (for lack of a more cohesive term) chronologically. The first section on Disneyland and the final section on Walt Disney Word are entertaining but don’t offer any revelatory information. Anyone who has read anything about the Disney parks will be very familiar with everything that Schmidt presents.

The Freedomland section, by far, was the most intriguing and was the largest part of Disney’s Dream Weavers. It’s obvious that Schmidt has a deep love of all of the parks and was very fortunate to have visited Freedomland and the World’s Fair. Schmidt takes us through the development, construction and the first years of the fledgling park. He has a good grasp of the details and individuals that created the park and offers compelling insight into its demise, as well.

Anyone that has a keen interest in Freedomland will enjoy Disney’s Dream Weavers. You can see how C.V. Wood was the driving force behind Freedomland and used his knowledge and experience from Disneyland to create the park. Schmidt’s book does delve into Wood’s work at Disneyland and refers to him as one of the designers and builders of the park. Much to the chagrin of Disney, Wood used this unofficial title as a means to get Freedomland built. It also gives another reason as to why Disney has whitewashed Wood from their history.

Schmidt is a journalist by trade and crafts a great read with a very enjoyable style. That being said, there are no notes or any type of a bibliography in Disney’s Dream Weavers. Schmidt explains that a lot of his information has come directly from interviews, but never states when the quotes are being used or their source. I ran into several facts or bits of information that I’d never heard before. Some were quite interesting and a few calls/emails to other Disney historians and archivists yielded puzzled responses and scratched heads. I sent two emails to the author (using the address published on his blog) and never received a response or a note. It was disheartening to read information I hadn’t seen before and couldn’t confirm. I still enjoyed the book, but I questioned a lot of the material that was presented. I know a lot about Disneyland, Walt Disney World and the World’s Fair, so I could judge the accuracy; I wondered about the definitiveness of the Freedomland information.

Disney Dream Weavers was still a book that I enjoyed reading. Disney enthusiasts and historians aren’t going to find anything new. I would recommend this book for anyone with a passing interest in Freedomland and wants to learn more about the connections that the four parks shared. If you’re relatively new to Disney park history, then this is a book you will really enjoy.

Did you ever get to visit Freedomland? What about the New York World’s Fair in 1964-1965? What do you think about Disney’s Dream Weavers?