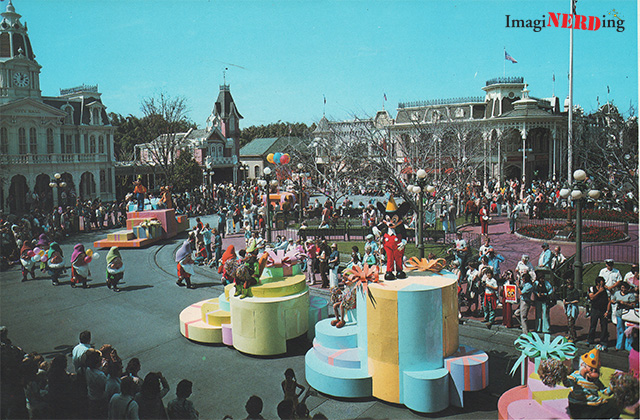 Did you ever get to experience Mickey’s 50th Birthday Parade?

I ran across some great images from The Magic of Disneyland and Walt Disney World that focused on Town Square at the Magic Kingdom. They happened to be promoting the parade for Mickey, but I made sure to take in a lot of the other details.

There are a few great shots of Town Square and the parade for Mickey’s 50th Birthday. It’s difficult to see in these scans, but there are screens or grates on the sides of the floats. I’m assuming the grates are for speakers. 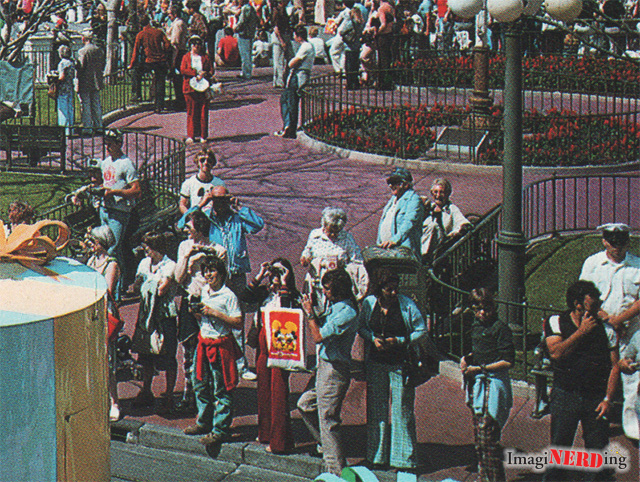 I scanned a closeup image of the lady in scarlet that’s holding a wonderful Walt Disney World shopping bag. Notice the bald guy in the blue jacket? It looks like he’s actually taking a photo of the Disney photographer! I do wish that lady would move so we could see the trashcan. The lady to the left of the trashcan has popcorn! 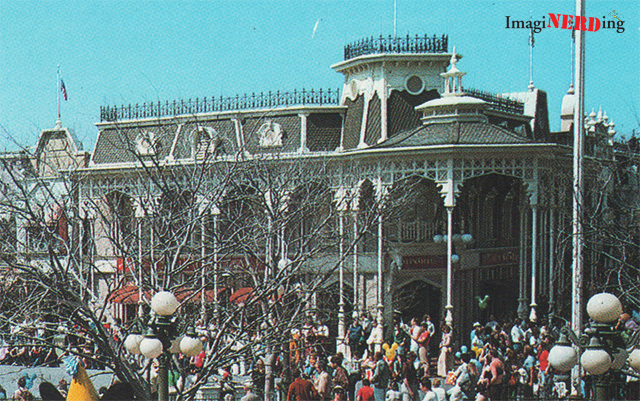 Just zoomed in to catch a clearer shot of the Emporium. It’s obviously Fall or Winter since there are no leaves on the trees. 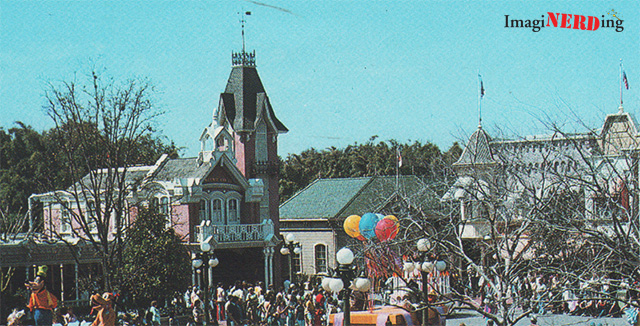 A great shot of the Fire Station Engince Co. 71 building. You can almost make out the Car Barn that houses the trolleys and horses. 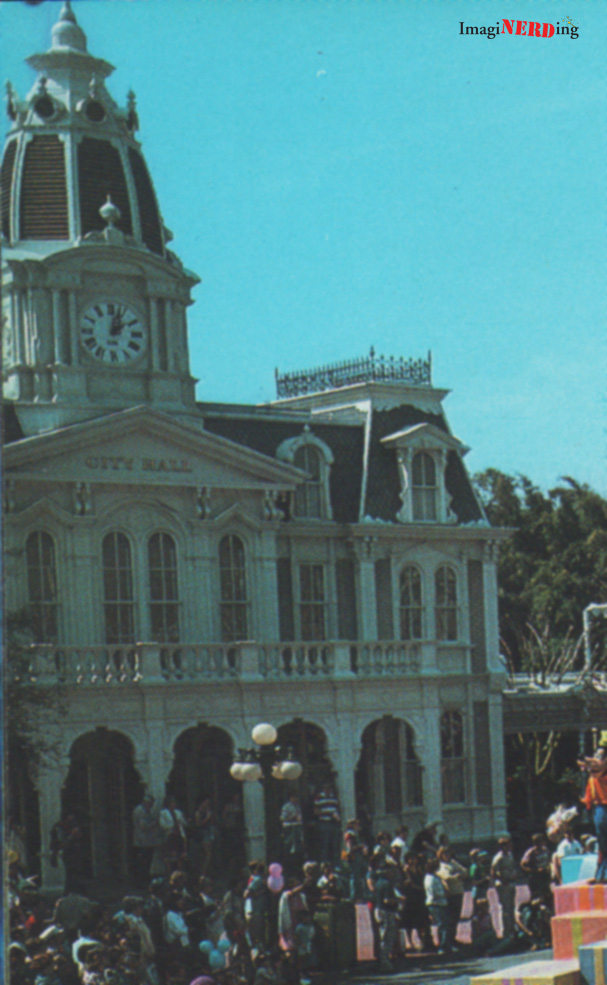 An interesting picture of City Hall. The 2:00 parade? 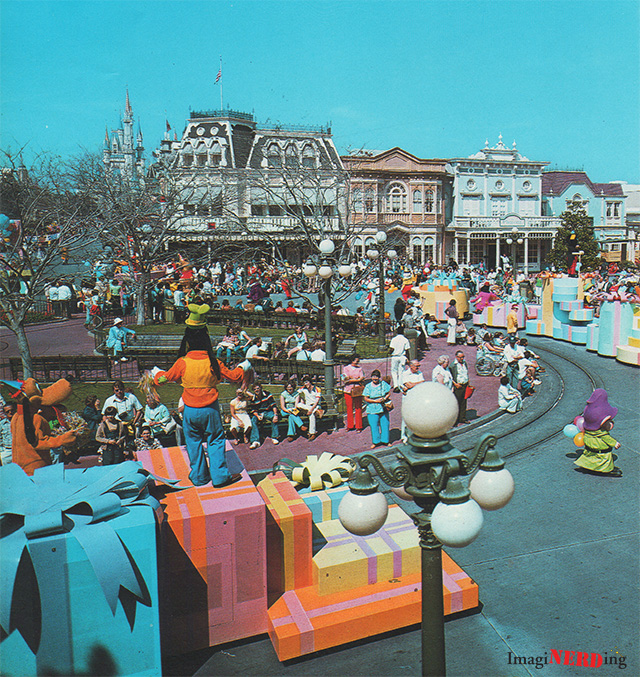 In this image, you can see the vents. It looks like they could be speakers and, possibly, an access hatch. Who could of imagined that the lamppost would be something we’d be interested in? 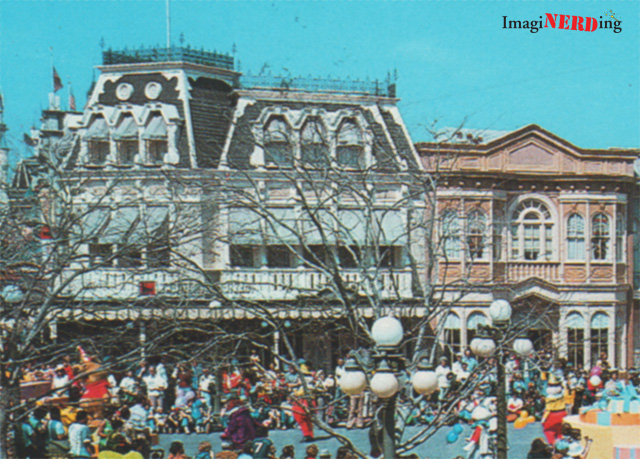 A closeup of the Main Street Camera Center. So, is that purple blob the Walrus? I think he’s standing next to Tweedle Dee (or Dum). 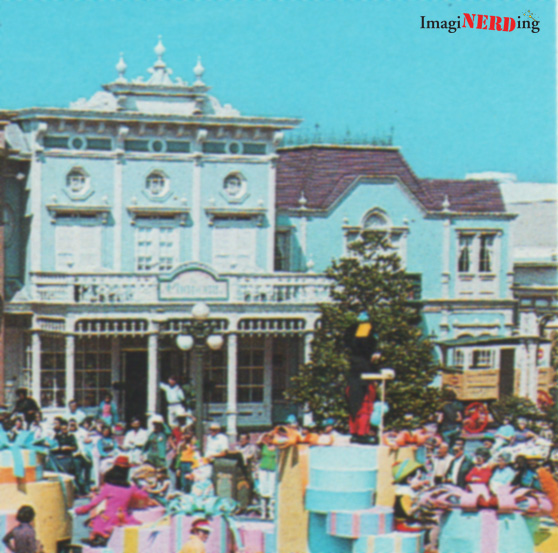 A close-up of The Chapeau. You can see a rather large tree in the photo, but no decorations, Also, That’s the Borden’s Delivery Wagon on the right side of the image! 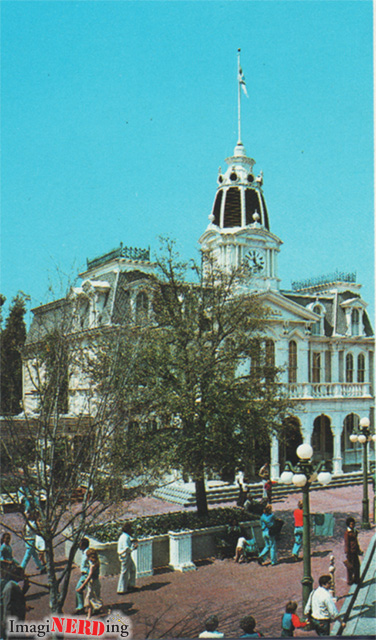 The final image today is one of City Hall. It’s interesting to see the changes made over the years to the area. There are two drinking fountains in front of the planter. Does anyone remember when the planter was removed? I can’t imagine that there were a lot of Disney bloggers complaining about changes to the Main Street hub back in the day.

Do you remember Mickey’s 50th Birthday Parade at the Magic Kingdom?