Dream It Do It : My Half-Century Creating Disney’s Magic Kingdoms by Marty Sklar, a book review

George: A lot of people have been asking me about Marty Sklar’s book, Dream It! Do It! : My Half-Century Creating Disney’s Magic Kingdoms. I held off on offering any thoughts on Dream It Do It  until I could offer a full look at the book because, well, Marty has a huge history with Disney. It’s not as simple as giving Dream It Do It two thumbs up or even a cautious meh. Marty worked with Walt Disney and many of the greats at Imagineering. He led WED/Imagineering for a large part of his career and was largely responsible for EPCOT Center (along with John Hench). His background was journalism and he wrote almost everything for Walt Disney during the 1960s before Walt’s death. He’s truly a master of communicating the Disney way and it shows in the book. Ultimately, that is also the greatest weakness but Marty jumps out of the Disney fold quite a few times with some extremely surprising stories.

Jeff: I think by now, we are all aware of how Disney releases its history: in parts, but with a thorough white-washing to get rid of any of the bad stuff, so only the pixie dust shines through. Like George said, I was very surprised to see some of that gritty under layer peeking out from behind the pixie dust every so often…especially for a Disney published book! But we’ll get to that in a minute.

George: Most of Dream It Do It does follow Marty’s career, as can be expected. Marty relates anecdotes of working with Walt, John Hench, Roy Disney and even our good friend Rolly Crump. It’s a litany of Disney Imagineers, Legends and Studio employees that revolutionized the theme park industry in some way. Being a Disney historian means that I’ve heard a lot of stories about all facets of the Disney Company, so I was wondering if i would run into any new stories or if Marty would be able to dispel some long-standing myths. On both counts, I was very pleasantly surprised.

Jeff: Agreed! There were quite a few stories that I had never heard before, especially about EPCOT, and was happy they were included in Dream It Do It. However, while we did get some great, new stuff, I feel as if we didn’t quite get the whole story. Marty merely scratches the surface on some of these topics, and seems to hold back a bit. I likened it to having a nice, fat, juicy steak in front of you. However, you can only eat around the sides, and never quite get to the juicy center. The framework for the whole story is there, and I hope that one day, the gaps are filled in for others. 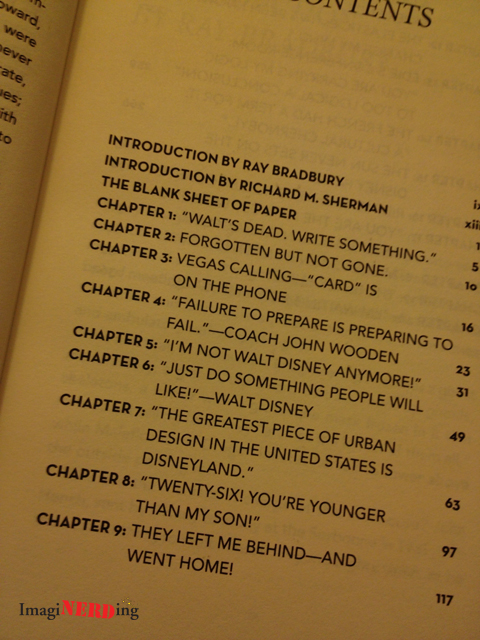 George: Yes, it really seemed like an introduction (or many, many introductions) to a lot of different stories. As Jeff mentions, the parts about EPCOT were the most satisfying. I found myself enjoying the middle of Dream It Do It the most since it dealt with the development of Walt Disney World, the Magic Kingdom and EPCOT. You could sense that Marty was really proud of his work during that time. Soon after that, with the Eisner regime, Marty would become more of an administrator. So, Jeff, tell us about how Marty feels about Dick Nunis…

Jeff: Oh man. This was REALLY surprising. For all its white washing, I have no idea how or why Disney allowed this to slip through. Marty makes no attempt to hide the fact that he HATES Dick Nunis. He goes out of his way to call him a bully and many other colorful words. There is even an instance where Marty tells Nunis to…well, there are expletives involved, and I was surprised to find them in a Disney book. It was quite surprising, especially when knowing how much Disney looks to brush that stuff under the rug. In a world where they try to control their image, and flat out deny other authors to publish books about other Disney Legends (Ward Kimball, for example), it’s very odd to see this happen.

George: It made me wonder how much power Marty has in the Disney organization, still, or whether Nunis was so disliked that Disney Publishing didn’t mind leaving it. In all, I was glad to see Marty talk honestly about few things. The latter part of the book deals heavily with the Disney Decade and the expansion of the Imagineering. It’s one of the largest growth periods at Imagineering and we’re introduced to several of Marty’s favorite people, like Eddie Sotto and Mickey Steinberg. Marty also talks about some of the internal politics but he approaches it more from a leader’s perspective. Another perspective of the book is that Marty shares leadership lessons from his career based on principles from Walt and John Hench. Marty really presents a great distilled version of 50 years of Disney customer service from an Imagineering perspective.

Jeff: I’m not going to say I hated it, because I didn’t. I did enjoy what was there, as much as it may have been just scraping the surface. But, I just wish it had included a bit more to its meat. Overall, though, it’s a great book for Disney fans, especially those of EPCOT Center, to learn a bit more.

George: I agree. Right off the bat it’s pretty interesting because of the collectible nature of the first edition of Dream It Do It. The actual book cover is a dark blue and is embossed with a silver “Marty” name tag. Under the name tag, it reads “When Dreams Comes True.” Apparently, that has been changed with the newest edition. So make sure to keep en eye out for the first edition with the typo!

Are you going to add Dream It Do It to your collection? What do you think about Marty not white-washing every story?