A Mickey Mouse Reader by Gary Apgar, a book review

George: The Mickey Mouse Reader is not your typical book about Disney history or about Mickey Mouse. Gary Apgar has collected and curated almost 70 articles from Mickey’s earliest moments through 2012. These are articles that appeared in various newspapers, magazines, journals and catalogs over the past 80 years. It’s truly an insightful look at Mickey Mouse as seen through the eyes of the media through the years.

Jeff: It’s an interesting collection, because if you read it in order, you’ll see an extremely interesting, chronological, history of the Mouse over the years. Not only that, but you’re seeing it through the eyes of various people: from Walt himself to various scholars. It presents an interesting view of his “life” and how we view him.

George: The 70 essays in the Mickey Mouse Reader are presented by art historians, critics, authors, and an anthropologist. Apgar was able to cull a wide swath of articles that really show how Mickey was perceived at various times throughout his career. Apgar does provide insight into each article by noting the historical issues and even the “mistakes” made about the Mouse’s life or the company’s history. The bulk of the articles seem to land during the first 10-15 years and the last 30 years of Mickey’s career, thus far. The middle period is the sparsest, but he did drop out of most animation around the middle of the previous century.

Jeff: I found the most interesting articles were the ones that provided the most historical context. For example, “Mickey Mouse – How He Was Born” written by Walt Disney from a 1931 issue of Windsor Magazine was especially interesting, if only to hear the story of Mickey’s origin from the man himself (with a PR spin, of course). On the flip side, the one from the Nazi publication, that showed Mickey as a symbol of the evil America stood in the Axis’ point of view, was intriguing, if only to see how the OTHER side perceived him. 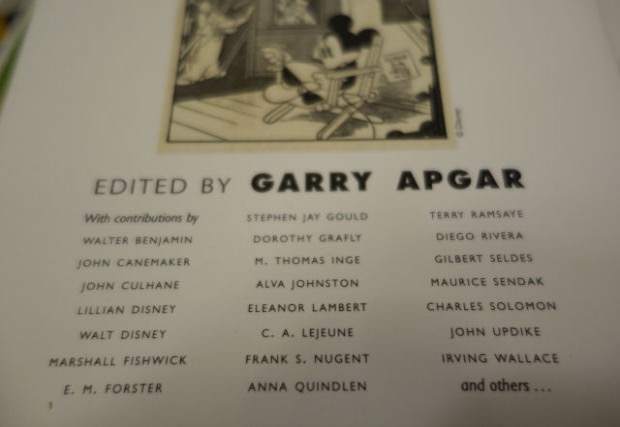 George: The articles ranged from a few paragraphs to several pages, with most falling around two pages. Even though the book is presented as an historical primer, I never felt like it was too dense to keep up with. The different ways that Mickey was viewed throughout the years really provided some keen insight into the company and popular culture from the time. Plus, there really isn’t any need to read the book cover-to-cover.

Jeff: One of the downsides, for me, at least, was that a lot of the articles covered the same ground. Granted, most were pieces that used the same publicity materials to get some of their facts at the time, but it seemed to go over the same thing more than once (three or four times, even) and it got tiresome reading the same facts. That said, there is plenty here to keep DisNerds interested. You may even learn a thing or two! 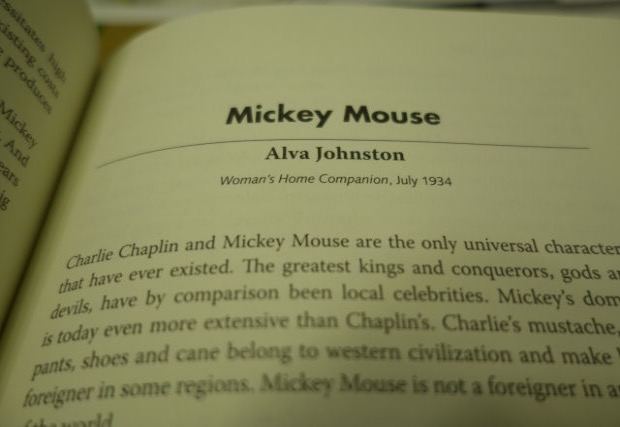 George: This is sort of a short review, but it’s a pretty straightforward book. You have different essays and articles that are looking at Mickey Mouse and his cartoons from the time period they represent. They’ve been curated by Apgar and The Mickey Mouse Reader really is a book that spans Mickey’s entire career. As Jeff mentioned, there are some articles that seem to repeat, but we guarantee that you will learn something.

Jeff: Also, if you are fluent in other languages, you’ll be able to read some of the articles in their native tongue. Informative about Mickey AND you get to practice your linguistics. It’s a win-win!

One thought on “Mickey Mouse Reader by Gary Apgar”