George: I’ve known the World Famous Dave Ensign for many years. I followed his exploits, virtually, over at Mesa Verde Times and I’ve been a fan and supporter of him and Chief since their first post. Dave has created a comic series, called Ward Dizzley’s 100% True Life Action Adventure Comics. So, who is Ward Dizzley and why should we care?

Jeff: Ward is Dave’s Uncle Walt-like alter ego. And it’s great. It’s a “character” he’s had for a few years, but he just channeled it into these amazing outlets, such as the comics. And now that two issues of the Ward Dizzley comics have come in, it is high time we take a look at them. Are these funny books worth your time and money? 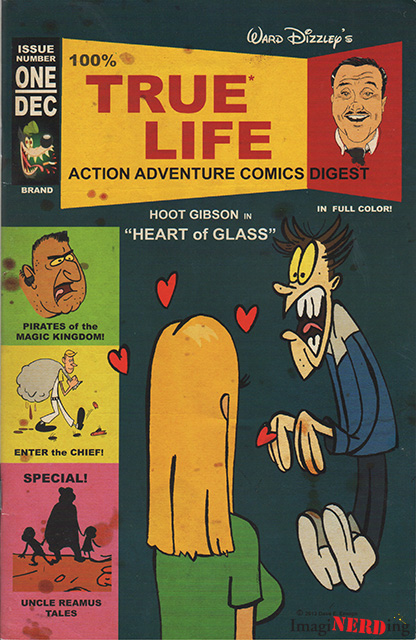 George: Bamboo Forest Publishing sent us review copies and I was glad to see such a high-quality presentation, especially in this digital age. Basically, the comics present a main story and several ancillary tales and satirical ads. After reading both, it looks like the Ward Dizzley comic is going to be a vehicle for Dave to share his adventures exploring the Magic Kingdom with his good buddy, Chief. Honestly, I’m very thrilled with the presentation and I’m glad Dave has an outlet to share his stories.

Jeff: Dave is incredibly creative (as evidenced by his 9-5 work, as well), but it’s great to see him really go nuts here. The Ward Dizzley comics themselves are presented much like comics from the golden era…amazing art, inter-spersed with fantastic (but unfortunately, fake) ads for amazing products. Want a “Burning Settler’s Cabin” or a “Blow-up 20K Sub”? Ward has got you covered.

George: My initial reaction was that Dave went for a very retro look, even adding fake stains to the pages. Dave has a great eye for the color choices and his style is very reminiscent of John Kricfalusi (of Ren & Stimpy fame). He does a wonderful job of using the Magic Kingdom as a backdrop and he captures the feel of the attractions and restaurants. The story that takes place in the Columbia Harbour House really shows off the restaurant as a character. You even get some insight into what it was like to work there.

Jeff: Like George said, the comics are broken into a few stories: usually a main adventure, along with a few ancillary tales as well. ALL of them are hilarious, though. Like, laugh out loud funny. However, it should be noted that these AREN’T for little mouse ears. The subject matter skews slightly more adult at times, so parents should enjoy this themselves, but keep away from the little ones

George: I’ve read hundreds of books about Disney (heck, I’ve reviewed 200 books for Communicore Weekly, alone) and I’ve read every book about Walt Disney World. What Dave has done with the Ward Dizzley series is absolutely brilliant as a means of conveying history about the Magic Kingdom. Yes, the main story is about how Hoot (Dave’s other alter ego) and Chief explored the Magic Kingdom, but Dave offers such clever insight into the “goings-on” on-stage and off- that you will be thankful just to hold the comic in your hands.

Jeff: I absolutely agree. And again, in addition to the awesome stories, there are a ton of extra activities to make it look and feel like a real, vintage comic. Yes, the ads are great (I really want that burning cabin), but so are the extras. Cut out the paper versions of Hoot and Chief, and use your fingers as their “legs” to help them escape! Laugh at the caricatures of people Dave used to work with! I mean, really, reading isn’t enough. There is a lot to do in each comic, and it”s great. 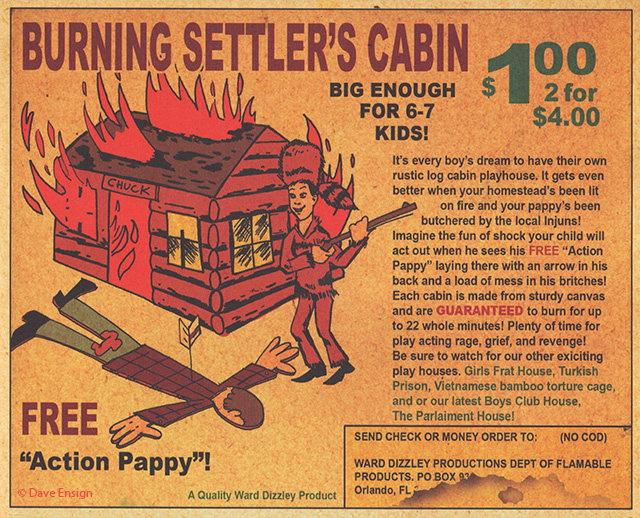 George: After thoroughly enjoying both issues, I can’t wait for Dave and Bamboo Forest Publishing to release more Ward Dizzley’s 100% True Life Action Adventure Comics. The comics aren’t for everyone, but if you enjoy a little irreverence and more than a healthy dose of snark, then you should check these out. The more copies that people buy, the more impetus that Dave will have to release more!

Jeff: More comics means more hilarity for us DisNerds. ALSO, I really, really want that Burning Settler’s Cabin. Can we make that a real thing? Let’s make that a thing.

Have you had the chance to check out the Ward Dizzley comics? What do you think about a non-traditional comic celebrating Walt Disney World?