GEORGE: Cinderella was Walt Disney’s return to animated features and classic fairy tales. It’s an easy call  that we would see a Cinderella blu-ray, but most fans are wondering if the specials are worth it and if it has a good hi-def transfer. I’ve owned this film on video, laserdisc and DVD; it amazes me to think of how many  times I’ve purchased it. First things first, this is a very important film and it looks and sounds great on blu-ray. 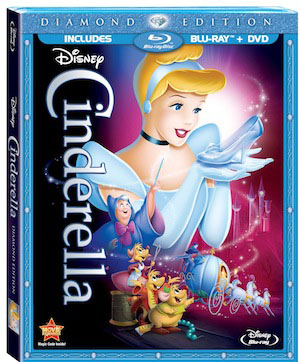 JEFF: I have to say that Disney has been knocking their last few Blu-Ray releases out of the park when it comes to the high definition transfer, and the Cinderella blu-ray is no different. It looks incredible on blu-ray, with everything being crisp and clear. It’s amazing to me how some of these older films look so good now. To be honest, I hadn’t seen the film in years, but I was surprised by how much I still enjoyed this time around. 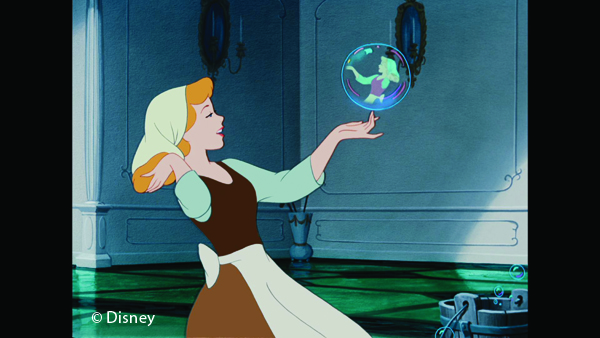 GEORGE: So much of the film has come to epitomize what a Disney Fairy Tale is. The music is played constantly in Disney Parks and on commercials. Of course, the Bippity Boppity Boutique owes quite a bit to the film.

JEFF: By now, though, I’m sure most of you know the film and the impact it has had on the Disney culture. I mean, heck, they named a castle after it! So, instead of rehashing the film itself, we’ll talk a little bit about the special features…or, in this case, the fluff. Most of the extras have been ported over from the last DVD release, while there are a handful of new ones. The most worthwhile one is the alternate opening that, while short, is nice to see how things “could have been.”

GEORGE: I was really excited when the Cinderella blu-ray showed up. Even though the most recent Blu-ray releases have been spotty with special features, I had high hopes for one of Disney’s flagship titles.

By far, the best feature on the Cinderella blu-ray was the Tangled short. It was charming, clever and funny. The most disappointing was a tie. I was excited about the behind the scenes look at New Fantasyland, but the actual construction is so much further along. (This review was originally published on October, 2012.) The Magic of the Glass Slipper was incredibly odd. It follows a famous shoe designer and how he gains inspiration from several Cinderella-like moments. It plodded and seemed overly-commercial.

JEFF: Some of the best special features on the Cinderella blu-ray are the ones we already got with the DVD…deleted songs, making of docs, amongst other things. I agree that the Tangled Ever After short (shown before the re-release of Beauty and the Beast in 3D) was the best addition, and that had nothing at all to do with Cinderella! So, is it worth buying?

GEORGE: I have to answer with a resounding yes! The reason you’re buying the Cinderella blu-ray is to get one of Disney’s most cherished and beloved films. The sound transfer is superb and will fill the room if you have a decent home theater. The animation is crisp and stands sharp with the Blu-ray presentation. This is a great family film and owning it on Blu-ray is a special treat.

JEFF: If you don’t already own a copy, then yes, like George said, go grab it! Having it on Blu-Ray will definitely enlighten the room. But, if you do already own the last DVD, and are on the fence about buying it on Blu-Ray, I would sit this one out. While the transfer is nice, I don’t think the smattering of extra features is enough to really push you over to dropping the money on it

Did you pick up the Cinderella blu-ray? Which film are you waiting on for the blu-ray treatment?