As the release of The Force Awakens draws nearer, I’m amazed by the sheer number of items available for sale and the amount of marketing. I’m trying to stay away from some spoilers, but even  seeing the merchandise in the store gives away too much information! D23 has just released their Winter 2015 issue that covers a lot of Star Wars!

JOURNEY TO A GALAXY FAR, FAR AWAY AS DISNEY TWENTY-THREE GIVES FANS UNPRECEDENTED ACCESS TO STAR WARS: THE FORCE AWAKENS 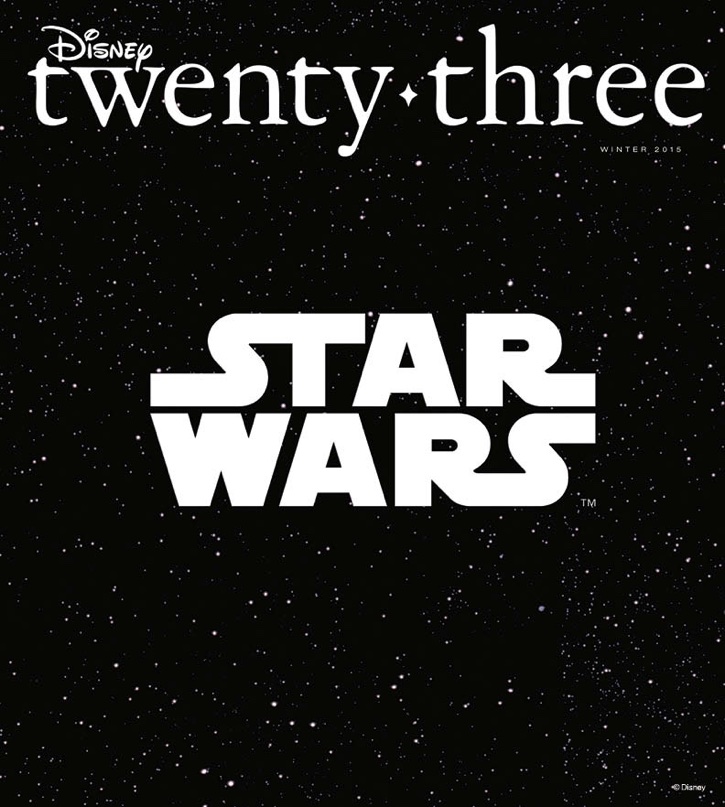 BURBANK, Calif. – NOVEMBER 02, 2015 – To celebrate the release of Star Wars: The Force Awakens, Disney twenty-three unlocks the power of the force to give fans a look behind the making of the newest installment in the Star Wars saga. The issue opens with “guest editor” C-3PO admitting he is unfamiliar with D23: The Official Disney Fan Club (“…although I am very familiar with the R2 series of droid, I am less familiar with the D23 line. Would it be R2-D23?”) and continues with candid interviews with the original Star Wars leads—Mark Hamill, Carrie Fisher, and Harrison Ford—looking back (and ahead) at the ongoing strength of these out-of-this-world films.

Director J.J. Abrams—whose long-standing history with Disney goes back to the TV show Felicity—sits down for a revealing Q&A, and Lucasfilm president Kathleen Kennedy talks about inheriting one of the most beloved franchises of all time. Plus, Imagineer Scott Trowbridge gives fans a peek at what’s in store for guests at the parks, following Disney Chairman and CEO Bob Iger’s announcement at D23 EXPO 2015 of Star Wars-themed lands coming to Disneyland and Disney’s Hollywood Studios.

Plus, there’s plenty of Disney magic in the winter issue of Disney twenty-three including:

Disney twenty-three, which is delivered directly to fans’ doorsteps, is offered exclusively to D23 Gold and Gold Family Members as a benefit of their membership. The latest issue will begin arriving in mid-November.