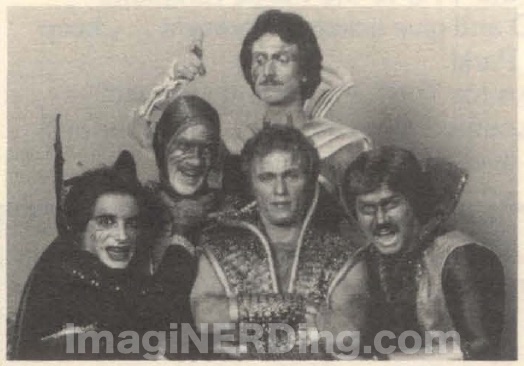 The Star Wars craze is picking up full force (get it?) and I was so surprised to run into this article from a 1977 Eyes and Ears about the disco band, Meco. They performed their chart-topping single “Star Wars Theme/Cantina Band.”

Popular disco group Meco highlights the December 10th Saturday Night at the World in the Magic Kingdom. Meco’ s “Star Wars Theme/Cantina Band” single from the “Star Wars and Other Galactic Funk” album has been one of 1977′ s biggest hits, enjoying a nine-week stay in Record World’s top ten. Both the single and the album are extremely close to being certified platinum.

On December 10, the Magic Kingdom operating hours will be extended until midnight with regular admission prices in effect.

Other special Saturday Night at the World features include Fantasy in the Sky Fireworks at 10 pm, the Cavalcade of Characters Parade at 9 pm, and performances throughout the Magic Kingdom by resident entertainers like Gabriel’s Brass, Michael Iseberg and the Mardi Gras Sound Company.

Meco will perform three shows on the Cinderella Castle Forecourt stage at 8 pm, 10:0 5 pm and 11:1 5 pm. Included in their performances will be their new album, ”Encounters of Every Kind,” slated for release this month.

Cowboys, flappers and bikers. Oh, my!

Check out this pretty amazing Youtube video. You won’t believe your eyes.