George: Disney has just released the Walt Disney Animation Studios Short Film Collection on blu-ray. It’s a collection of 12 short animated films. Similar to the releases by Pixar, this collection show cases shorts that were shown before major releases as well as a few that haven’t seen wide release. Is this one worth adding to your collection?

Jeff: I’m a big fan of the art form of short films. You have to connect with an audience and give them a pay off within a small amount of time. It’s not an easy task, and it takes a lot of skill. The fact that all of these films accomplish that is amazing. Each one is almost better than the last, and they really show the wide ranges of skills of their directors.

George: I really like all of the short films, but a few of them really stood out and made the purchase of the Walt Disney Animation Studios Short Film Collection worthwhile. Most of them I’d already seen before the major theatrical releases, except for a few. The style differences between them were pretty spectacular, but the quality of them were all extremely high.
Here’s the list of the shorts: 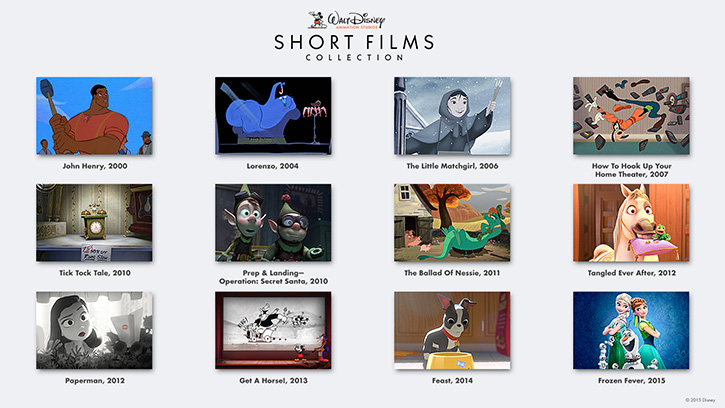 Jeff: The thing about the short films is that they really allow the directors to step out of the box and try something new. Almost every single of these films explores a new technology to some degree, and lets the animators flex their creative muscles. No two look the same, and again, they are all fantastic. Stand outs for me were definitely John Henry, Get A Horse!, Feast, and more. But really, there are not BAD films here. Even Frozen Fever was great!
George: I’d be hard-pressed to pick a favorite, but Get a Horse! might be it, simply because the presentation of the short was so clever and charming. Plus, it used Walt Disney’s voice! But as Jeff mentioned, every short stood on its own and gives the viewer something different that has not been seen before. Some of the shorts were played for comedy (which is always great), while a few were very artistic in their nature and helped stretch the boundaries of animation. But, should we mention how good Frozen Fever was?

Jeff: I really like that Disney Animation has this program where anyone can pitch an idea, and if John Lasseter approves it, they can develop. To me, this allows all the already fantastically talented people working for Disney be even more creative. And in return, we get these awesome films to enjoy at the end of their process.
George: At Pixar, the shorts were always used as a proving ground for future directors. At Disney, it’s more about giving any artist the chance to prove their skills. With the Walt Disney Animation Studios Short Film Collection, the skills really shine through! It’s very easy to recommend this set, even though there are only 12 shorts. I think there’s enough here to entertain most adults and children, especially fans of the different properties (like Tangled and Frozen).

Jeff: There is a single extra, where TJ Miller, the voice of Fred from Big Hero 6, sits down with some of the directors to talk about how their films came about and their animation. It’s short, not terribly informative, but it’s not the reason you’ll be buying the disc. You’re buying it to have these wonderfully gorgeous short films all in one place. And it’s well worth the purchase.

Are you going to add the Walt Disney Animation Studios Short Film Collection to your library? What’s your favorite short from this collection?