The Art of Big Hero 6 is a large-format Chronicle Book written by Jessica Julius. It was released a few weeks before the film but I didn’t pick up my copy until recently (because I really hate spoilers of any kind). With the release of Big Hero 6 on blu-ray (and its Oscar win), it’s a great time to look at the book.

Big Hero 6 quickly became one of my favorite animated films, if not one of my favorite Disney films. My other favorites have always been Lilo & Stitch and The Incredibles, which both share themes of family. When we got our download code for the film, we easily watched it five or six times before we got our blu-ray copy.

Even just watching the trailers before Big Hero 6’s release, it was obvious that Baymax was going to be an amazing character and this book does go into some great detail about the creation and evolution of everyone’s favorite healthcare robot.

The Art of Big Hero 6

The Art of Big Hero 6 is a quick read compared to some of the other Chronicle Art of… titles, but it still offers the beauty and insight of the other books. Big Hero 6 was one of the more gorgeous films, not only because of the increases in technology, but because of the care that was taken in crafting the world. They took the best of Tokyo and the best of San Francisco to make San Fransokyo.

Almost 50% of the book was dedicated to the creation of San Fransokyo, which does show how important the backgrounds are for the entire film. There are some jaw-droppingly gorgeous paintings and computer illustrations that show the evolution of the city in the project. Even though many of the paintings are fully digital, they still look like watercolors and ink drawings. Also included are photos that the filmmakers took of San Francisco and Tokyo to use as reference footage. One more interesting section was how they made San Fransisco look like it slowly evolved with larger stylings of Tokyo culture and iconic buildings. Time is spent on individual pieces of furniture and room layouts, as well, further adding to the depth of the environment and the book.

The character development for BH6 was a large part of the title, as expected and took up the rest of the book. Since there were some changes made from the comic series, the artists showed the progression that was made to get the characters we see in the film. 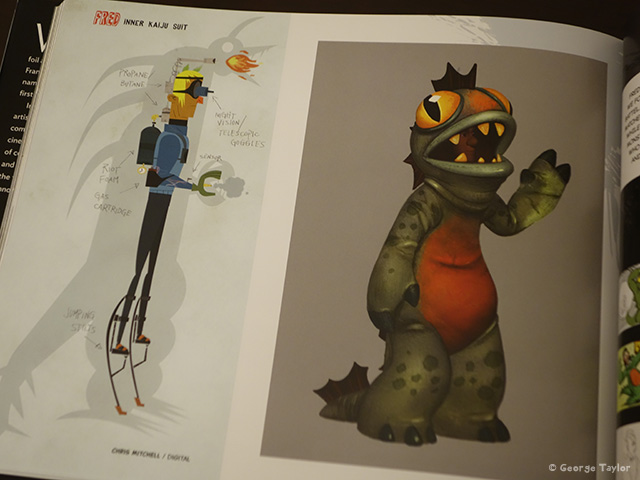 Each character gets about three to four pages to themselves as well as parts that focus on how the characters work together, visually. One of the original designs for Hiro’s hero suit was red, but they changed it to purple to contrast with Baymax’s red hero suit.

Quote from John Lasseter about designing Hiro:
Hiro was a challenge because he’s a gangly, fourteen-year-old-boy genius. He needs to be appealing but not a cutesy kid. We found his design by studying young teenagers who are really brilliant in science or the arts, who are so utterly focused on their particular interests that dressing and combing their hair is an afterthought.

The section on Baymax is the largest and focuses on how long it took them to narrow down his shape and overall look. There are different illustrations for a few different Baymaxs. They all look similar but not as good as the one in the film. We also see a lot of the different suits they designed for Hiro and the design of Baymax’s robotic parts which helped to base the movements in reality. There’s even a page about Honey Lemon’s purse and how it works with exploded drawings.

The last few pages of the Art of Big Hero 6  book look at some things that didn’t quite make it: the Vanished Villains! A girl gang called the Fujitas, a tv host called Mr. Sparkles and the Bonsai Bombers!

Fans of Big Hero 6 are going to love this book. Animation historians will love it, especially since it’s a Marvel property done by Disney and very much acts like a Pixar film. Not quite an enigma, but close. The Art of Big Hero 6 is visually stunning and does offer insight into the filmmaker’s decisions about the movie making process. When you see how the characters diverged, it’s interesting to think of how different the movie would be.

I think you’re going to like this one; trust me, I’m a librarian.

Are you going to add the Art of Big Hero 6 to your collection?