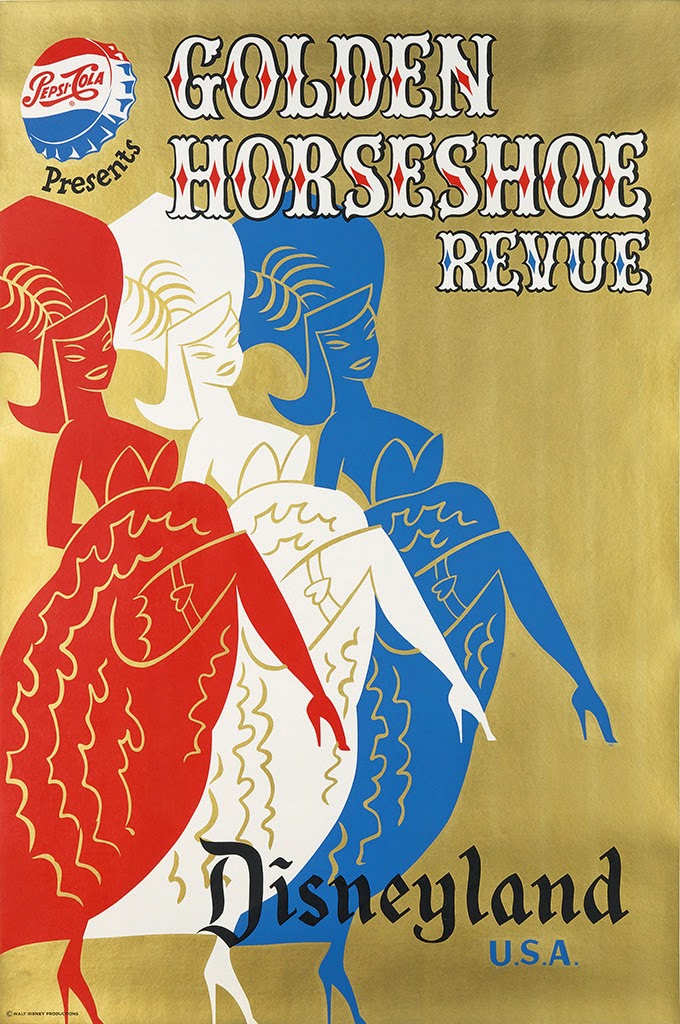 This spectacular Golden Horseshoe Revue attraction poster is being auctioned on April 24, 2014 at Swann Auction Galleries.

Information About the Attraction Poster

Little biographical information exists about Aronson, but he was one of the major designers of Disney posters throughout the 1950s and 60s. This poster, depicting “Slue Foot Sue’s dance hall girls,” is one of two variations; the other says “Frontierland” across the bottom. It is one of the few early Disney posters with a prominent cross marketing pitch. Pepsi was an official sponsor of Disneyland from the opening day in 1955 through 1990. Disney Parks p. 58 (var).

Regarding bidding: If you cannot attend the sale in-person, you may place bids in advance via telephone, fax, mail, or e-mail, and Swann’s staff will bid on your behalf. You may also make advance arrangements to bid live by telephone during the auction. To make bidding arrangements, contact Swann Galleries at: 212-254-4710. Live online bidding is available via Invaluable. Click on the Invaluable link on the www.swanngalleries.com homepage.

This is a wonderful poster that is sure to draw a lot of attention. 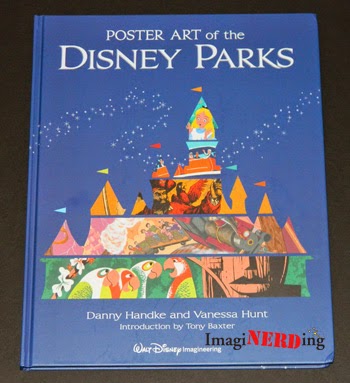 Did you ever pick up a copy of the Poster Art of the Disney Parks?

The full press release for the auction is reprinted below.

New York—Swann Galleries’ April 24 auction of Modernist Posters is filled with eye-grabbing examples of cutting-edge design, including a strong selection of Russian constructivist works, which includes seminal pieces by the great artists of the genre.
Among the best examples of these are Alexander Rodchenko’s 1923 design for Dobrolet, the Russian Society of Volunteer Air Fleet, with a message that translates to, “Golden ruble makes everyone a shareholder” (estimate: $20,000 to $30,000); Gustav Klutsis’s photomontageBuilding Socialism Under the Banner of Lenin, 1930, his first poster depicting Stalin, and In the Storm of the Third Year of the Five-Year Plan, 1930 ($10,000 to $15,000 each); and Valentina Kulagina’s—who was also Klutsis’s wife—International Working Women’s Day / Is the Fighting Day of the Proletariat, 1931 ($3,000 to $4,000).
There are envelope-pushing images from around the world including one by Dutch painter, architect and graphic designer Bart Van der Leck, De Ruiter, a poster for an exhibition of his work, in his signature minimalist and fragmented style, 1919 ($7,000 to $10,000); a group of 10 rare propaganda posters from Mexico, circa 1938, designed by artists from the print collective Taller Grafica Popular for a series of anti-Nazi lectures held in Mexico City ($3,000 to $4,000); and Xanti Schawinsky’s Illy Caffe, 1934, with a bold, post-Cubist face of a woman in shades of blue and pink drinking coffee ($12,000 to $18,000).
Classic Art Deco design is seen in Robert Bonfils’s poster for the exhibition that created the very term, Exposition Internationale Des Arts Decoratifs et Industriels Modernes, which comes with a proof before lettering, 1925 ($4,000 to $6,000); Jean Dupas’s elegant department store advertisement for Arnold Constable, Paris, 1928 ($3,000 to $4,000); Paul Colin’s dynamic Le Bal Fleuri. which captured the spirit of the roaring 20s via two dancers, 1927 ($15,000 to $20,000); and Noel Fontanet’s 7me. Salon International De L’automobile Et Du Cycle / Geneve, which evokes Mercury’s winged helmet emerging from the front end of a speeding car, 1930 (each $4,000 to $6,000).
Additional Machine Age-inspired transportation images are A.M. Cassandre’s Chemin de Fer du Nord, with a stylized compass needle, 1929; and Sam Hyde Harris’s scarce Southern Pacific’s New Daylight, 1937 ($3,000 to $4,000).
Typography highlights range from Bertold Löffler’s Kunstschau Wien, an exhibition poster that displays the intersection of the heavy, abstract ornamentation of the Vienna Secession and the cleaner, linear designs of the Wiener Werkstätte, 1908 ($20,000 to $30,000); to a collage maquette attributed to Walter Dexel, Neue Wege der Photographie. 1928 ($4,000 to $6,000); Walter Ballmer’s Basel school-inspired Stile Olivetti, 1961 ($800 to $1,200); and Paul Rand’s memorably playful reimagining of the IBM logo, 1991 ($3,000 to $4,000).
A selection of elusive ephemera related to Andy Warhol—Andy Warhol-iana if you will—includes mid-1960s New York film broadsides announcing his films and appearances with The Velvet Underground ($1,500 to $2,000 each) and his celebrated design for the 1967 Lincoln Center Film Festival (also $1,500 to $2,000).
There are three early and important works by renowned Japanese designer Tadanori Yokoo: The City and Design, The Wonders of Life on Earth, 1966, promoting a book by Isamu Kurita, for which Yokoo also did the illustrations ($8,000 to $12,000); Word & Image, the famous poster for his 1968 exhibition at New York’s Museum of Modern Art and a film poster for Diary of a Shinjuku Burglar, 1968, which employs a symmetrical layout using cartouches and vignettes, reminiscent of old musical posters ($3,000 to $4,000 each).
The sale offers music posters as well, mostly from the psychedelic era, with examples by Martin Sharp and other prominent artists of the 1960s.
Don’t forget to stop by our site and leave some Disney Geek love!http://www.imaginerding.com