We’ve been celebrating the 50th anniversary of the 1964-1965 New York World’s Fair at Communicore Weekly (the Greatest Online Show™) as part of our Season Three series. D23 is set to hold a major event this summer which will also include events and panels dedicated to the Fair (check out the details, here). The latest issue of D23 looks like it’s going to be a winner. Make sure to sign up for the Gold level in order to get all the perks. 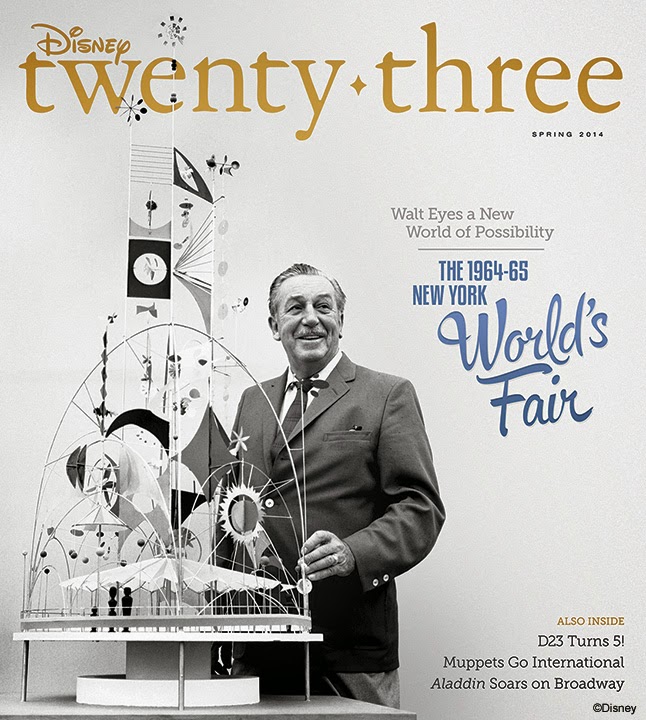 FEATURING RARELY SEEN CONCEPT ART AND PHOTOGRAPHY FROM THE FAIR, AS WELL AS EXCLUSIVE INTERVIEWS WITH CHRIS EVANS, TINA FEY, AND THE MUPPETS

Plus, D23.com online exclusives include extended celebrity interviews and additional stories, artwork, and photography from the World’s Fair.

BURBANK, Calif. – FEBRUARY 13, 2014 – The 1964–65 World’s Fair in New York celebrated a time of optimism, growth, and progress. D23: The Official Disney Fan Club captures all the excitement of this epic event in the Spring issue of its publication, Disney twenty-three. The Fair, which is celebrating its 50th anniversary this year, marked the creation of landmark Disney technology, music, and attractions including it’s a small world, Audio-Animatronics® technology, Great Moments with Mr. Lincoln, and the Carousel of Progress—with its memorable theme song “There’s a Great Big Beautiful Tomorrow.” Disney twenty-three sat down with several Disney Legends responsible for these iconic landmarks including Marty Sklar, Alice Davis, and Bob Gurr. Stunning concept art and rarely seen photography from the Fair complement the stories in this issue, available exclusively to Gold Members of D23.

Disney twenty-three’s Spring issue also includes a look ahead at some of the latest entertainment coming from Disney. Ty Burrell, Tina Fey, Kermit the Frog, and Miss Piggy give readers a peek “behind the felt” at Muppets Most Wanted, which opens this March. Chris Evans talks about suiting up once again for April’s Captain America: The Winter Soldier. Plus, Jonathan Freeman discusses taking his characterization of the villainous Jafar from screen to stage, as Disney Theatrical Productions prepares to open Aladdin on Broadway this March.

Also included in the Spring issue of Disney twenty-three:

All D23 Members are invited to visit www.D23.com for additional members-only content, including extended Q&As with Kermit, Fey, Burrell, and the irrepressible Miss Piggy from Muppets Most Wanted.

Other features coming to D23.com include: