If you look online to see what happens to all of the coins that people throw into almost every body of water at Disney parks, you’ll see a variety of answers; most of them revolve around donating the monies to charities.

I work for library with a fountain and people do throw in lots of change. When the city workers clean out the fountain, they bring the scooped out change to us. Sadly, the coins start to oxidize almost immediately when they’re removed from the water and the cost to clean the coins far outstrips the value.
On the pathway that leads from the Sir Mickey side of Cinderella Castle to the Merida meet and greet in the Fairytale Garden is a fountain. There is a small plaque near the base of the fountain that reads: Your wishes will help the Dreams of Children come true. 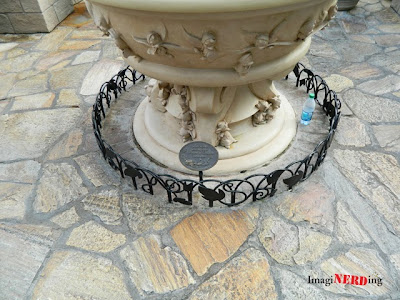 The fountain is decorated with the birds and mice from Cinderella.
Back in the day…
It was slightly different story. According to the July 1, 1972 Eyes & Ears cast member publication, the money was used a little bit differently.

A quick check indicates the waterways are cleaned once and sometimes twice a week. Three men do the work and the money is given to employees through the Recreation Club.

Thorn Murphy, Rec Club director, told us that between $4,500 and $4,800 has gone into equipment purchases for employee athletic and recreational programs. Thorn said money not immediately used is put into the club’s treasury and held for rainy days ….. The Editor

Do you usually make a wish and toss coins into the fountains and waterways of Disney parks?
Don’t forget to stop by our site and leave some Disney Geek love!