My youngest is a huge fan of the Skylanders series, mainly for the collectible nature of the figures. Disney Infinity follows a similar path but it looks like there is a larger and more involved gaming feature. Disney has just released images and figures for the Pirates of the Caribbean Play Set.

Is this something you’re going to pick up? 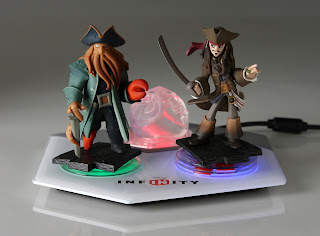 Within the Pirates of the Caribbean play set, gamers can take on the role of Captain Jack Sparrow, Captain Barbossa and Davy Jones as they set sail to new lands in search of adventure and gold.  Key highlights include:
·         Combat and Customization: Players will be able to explore new lands while battling via water and land to become the king of the sea. Additionally, players can customize their ship, by choosing everything from the overall décor of the vessel to the cannons on board. 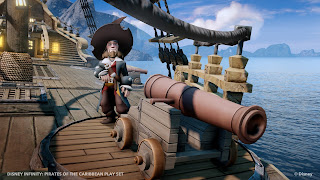 ·         Play Set: The Pirates of the Caribbean play set adds its own specialized game play mechanics and pieces to the Disney Infinity world such as unique weaponry that when activated in Toy Box mode allows players to create all-new combat challenges, build and customize worlds and much more. 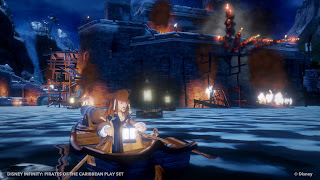 ·         Toy Box mode: The pirate trio of Captain Jack Sparrow, Captain Barbossa  and Davy Jones are able to interact with all of the previously revealed Disney Infinity characters from The Incredibles, Monsters University and Cars to create new and exciting adventures on the high seas and beyond. 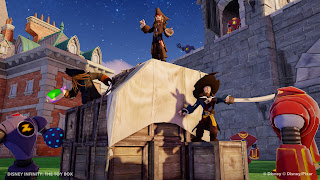 About Disney Infinity
Disney Infinity is an all-new video game initiative starring the beloved characters from Walt Disney and Pixar Studios’ most popular franchises. Players can place real-world toy versions of their favorite Disney characters onto a device called the Infinity Base and transport them into the virtual game worlds of Monsters University, the Incredibles, Cars and Pirates of the Caribbean, as well as into a giant Toy Box.
For additional information on the Disney Infinity Toy Box mode, visit https://infinity.disney.com/toy-box, join the Disney Infinity Facebook Community (Facebook.com/disneyinfinity), and follow us on Twitter (twitter.com/disneyinfinity) and Instagram (instagram.com/disneyinfinity).
Don’t forget to stop by our site and leave some Disney Geek love!http://www.imaginerding.com