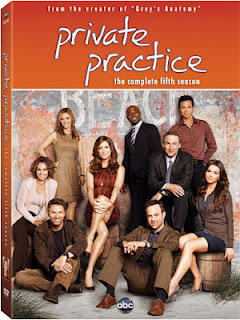 If you ever wonder why the Imaginerd wanted to review the Private Practice DVD…wonder no more. His “Imagiwife” forces him to watch the show and get the DVD’s for me to watch completely before the premiere.

I enjoy the DVD set for many reasons. I get to refresh my memory on everything that transpired over the last season. Pete’s decision, Violet’s inconsistent emotion, Amelia’s new burden, Sheldon’s continued unrequited affections, Cooper and Charlotte’s new lives as parents, the emotional trio (Addison, Sam and the new guy, Jake).

I have to add that KaDee Strickland has quickly become one of the most impressive actresses that I have ever watched. She is dynamic, adaptable and becomes her character.

The bonus of the set is last season’s deleted scenes and the thoughts of the actors/actresses. It is always interesting to see the pieces that were removed for time constraints and being able to go “Hmmm that adds this perspective” or “I can see why that was cut”. The thoughts and comments about the addition of infants, toddlers and children to the set are entertaining.

If you are a fan, it is worth owning the set. Accessing the episodes online just doesn’t provide the entire experience.

Bonus Features:
The Practice of Parenthood – The pitter-patter of little feet found its way onto the set this past season in a number of ways. In this exclusive feature, fans can listen in as the cast of the hit series discusses filming with the young actors during the fifth season.
Deleted Scenes – Through these deleted scenes, fans will learn even more about their favorite characters from the hit series.
Bloopers – Fans will laugh out loud at a hilarious blooper reel of the season’s most funny on-set moments.

One thought on “Private Practice Review”