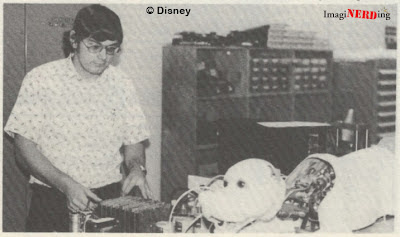 Remember when Disney rolled out Lucky the Dinosaur and the Mobile Muppet Labs?

Long before that, Disney was investigating other ways to make the Animatronics more lifelike, portable and in your face! Well, maybe not  the last part.

In a 1977, Eyes and Ears (July 22, 1977), we meet Imagineer Steve Mcintyre who was working on a portable computer that fit into a briefcase in order to control smaller Audio Animatronic figures.

James Bond managed to carry many interesting things in his suitcase, but the one thing he never did manage to fit in was a computer. That has been left to our engineers at MAPO to build. MAPO’ s new Micro Animation Control System (MACS), designed primarily by Steve Mcintyre, may soon make it possible to program and operate by portable computer small AudioAnimatronic figures … from a “suitcase.”

At both Disneyland and Walt Disney World, there are many AA figures located too far from DAC Central to operate off their huge computer systems, so they are currently run by a drum timer or cam machine. The drum is something like a music box cylinder and provides digital function only, whereas MACS would provide analog function as well. Digital function provides one shot of power per command, something like an on/off light switch. Analog function, in comparison, acts something like a light “dimmer” switch, providing gradations of movement. MACS would allow the AA figures a larger number of movements, all much smoother, with fewer mechanical parts to wear out in the control system itself. It’s actually two units used together. The portable “suitcase” programmer would be carried out to the animation. A small playback unit would be attached permanently to the animation and the programmer hooked in. Then you just feed in your commands. The current MACS is limited to eight analog commands, which is not sufficient for the larger AA figures, but is certainly an improvement for small animation in remote locations. A prototype MACS is currently working in the lab at MAPO.