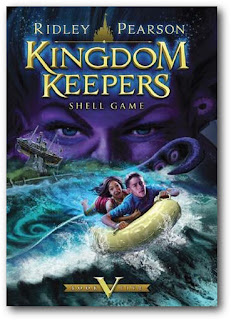 The fifth book in the Kingdom Keepers series takes a few new twists as the Keepers enter their mid-teen years. The book is somewhat darker as the Keepers face issues that regular teens do, sort of. Of course, there are the first stirrings of teen love but there are also some new experiences, including the debut of Disney Host Interactive 2.0 with new powers and abilities and the first use of the DHI technology outside of Walt Disney World.

The Keepers, working alongside the enigmatic Wayne, are invited to take part in a voyage of the Disney Dream Cruise Ship. Besides being the introduction of the interactive hosts on the cruise, it is also touted as the first commercial cruise line to go through the Panama Canal. The mythology of the Kingdom Keepers has grown in their world as their battles with the Overtakers have been noticed by castmembers and guests. The Overtakers, a group made up by the worst of the Disney villains, want nothing more than to take over the Disney theme parks for themselves.

Pearson knows how to weave a story that is parsed with excitement, danger and believable characters. My biggest and most recurring complaint is about the liberties that Pearson takes with Walt Disney World geography and the mythos about Walt Disney. The latter part of the series seems to correct this by involving the Keepers into a more modern and realistic tale. There are still a few fantasy elements about the Imagineers, technology and the development of the parks that are hard to swallow, but sometimes you have to just enjoy the book you are reading.

Fans of the series are going to love the direction that Ridley has taken and from the ending of The Shell Game, there will definitely be a book six.

Will the Keepers be heading to Disneyland?

What do you think?

I received a review copy of this book from Disney Publishing Worldwide.