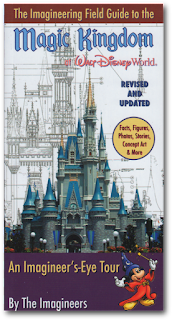 How many times have you visited the Magic Kingdom and wished that you could have an Imagineer share all of the insider information, hidden details and tributes? 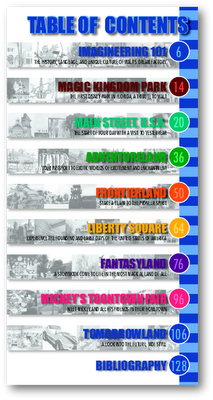 The Imagineering Field Guide to the Magic Kingdom is a book that needs to be in every theme park junkie’s collection. It was first published in 2005 with a revised update in 2009. Imagineer Alex Wright penned all five books in the Imagineering Field Guide series and it is obvious that he knows Disney history and design. He was responsible for the redesign of Space Mountain, parts of the Haunted Mansion refurbishment and he worked on Disney’s Animal Kingdom. Alex’s love for the Magic Kingdom is evident; the Field guide is a loving tribute to the Imagineers who created the park. 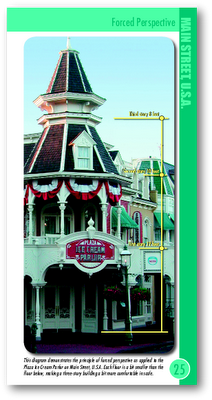 The Imagineering Field Guide to the Magic Kingdom is the perfect companion while at the Magic Kingdom park. The Magic Kingdom guide takes you land-by-land to explain how the park was designed and created. We meet the Imagineers and artists that built the park we experience today. Each land is color-coded to make it easy to find the section you want. Alex shares a lot of concept art and the stories behind the attractions. (Windows, posts and crates. Oh, my!) He also relates a lot of the hidden and not-so-hidden details. Honestly, who is better to tell you about the Magic Kingdom than one of its artists? 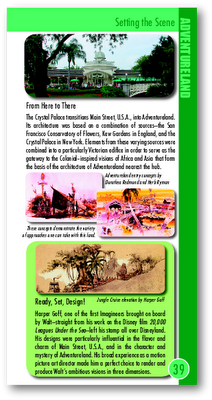 The book is small, measuring 4” x 9”, which makes the art small, but it is a perfect size to take to the Magic Kingdom with you. Because of the relatively small size, it is easy to slip this book into a backpack to share while in a queue or while eating. This is a book that is perfect for the person just starting to get into their geekery and for those of us that have been studying the parks for years. Ideally, you would re-read this book on the plane trip to Orlando and surprise all of your friends with all of your insider knowledge. 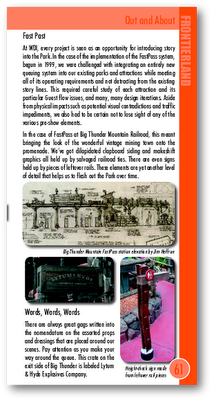 Alex tackles a difficult task with this book. He needed to create a work that would satisfy a newcomer and interest a hardcore enthusiast. I have to admit that I learned a few things after reading the book the first time. No matter how many times you have visited the Magic Kingdom, you will learn something from reading the Field Guide. 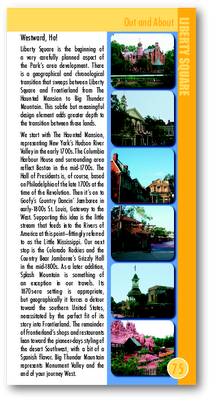 We start with The Haunted Mansion, representing New Yorkʼs Hudson River Valley in the early 1700s. The Columbia Harbour House and surrounding area reflect Boston in the mid-1700s. The Hall of Presidents is, of course, based on Philadelphia of the late 1700s at the time of the Revolution. Then itʼs on to Goofyʼs Country Dancinʼ Jamboree in early-1800s St. Louis, Gateway to the West. Supporting this idea is the little stream that feeds into the Rivers of America at this point—fittingly referred to as the Little Mississippi. Our next stop is the Colorado Rockies and the Country Bear Jamboreeʼs Grizzly Hall in the mid-1800s. As a later addition, Splash Mountain is something of an exception in our travels. Its 1870s-era setting is appropriate, but geographically it forces a detour toward the southern United States, necessitated by the perfect fit of its story into Frontierland. The remainder of Frontierlandʼs shops and restaurants lean toward the pioneer-days styling of the desert Southwest, with a bit of a Spanish flavor. Big Thunder Mountain represents Monument Valley and the end of your journey west (p, 75). 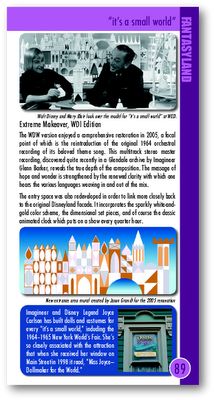 I have hopes that Disney will release another updated version after the Fantasyland expansion. I can only imagine the details that Alex will be able to share about the stories that went into the design and refurbishment of an entire land. In this instance, Alex has left an official record of what the park looked like before the Fantasyland redesign; it isn’t often that we see an approved dissection of what the Imagineers have done. 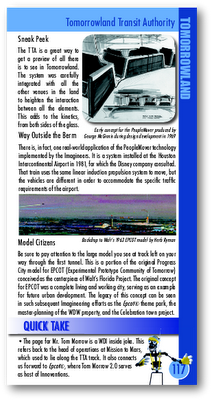 Some of my favorite sections of the Field Guide are when Alex relates the history of the attractions. Many times, he will trace the lineage of the attraction to Disneyland or share stories of the Imagineers that worked on them. In most cases, this is a great introduction to some of the more famous Imagineers. Alex also highlights a lot of artwork from current Imagineers, too.

I recommend The Imagineering Field Guide series to most anyone with an interest in the parks. They are quick reads and will get you started thinking about the design and layout of the parks. The books also make great gifts for anyone who is getting ready to go to Walt Disney World.

One thought on “Imagineering Field Guide to the Magic Kingdom, a Book Review”