Don’t forget: Ryan Wilson, from the Main Street Gazette, will be part of a discussion about Disney theme parks on Saturday, February 18 at 2:00 pm at the Cameron Village Regional Library in Raleigh, NC. 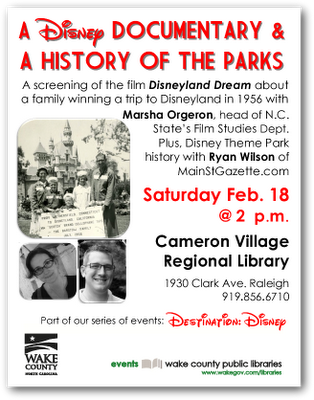 This is also the opportunity to see a screening of a fantastic short film about a family’s trip to Disneyland and the Los Angeles area. It is a very charming and heartwarming film. The father loved making amateur films and documented the family trip in a light and humorous way. There is a lot of fantastic Disneyland footage.

A Disney Documentary and A History of the Parks

A screening of the film Disneyland Dream about a family winning a trip to Disneyland in 1956 with Marsha Orgeron, head of N.C. State’s Film Studies Dept.

Plus, Disney theme Park history with (the awesome) Ryan Wilson of MainStGazette.com.